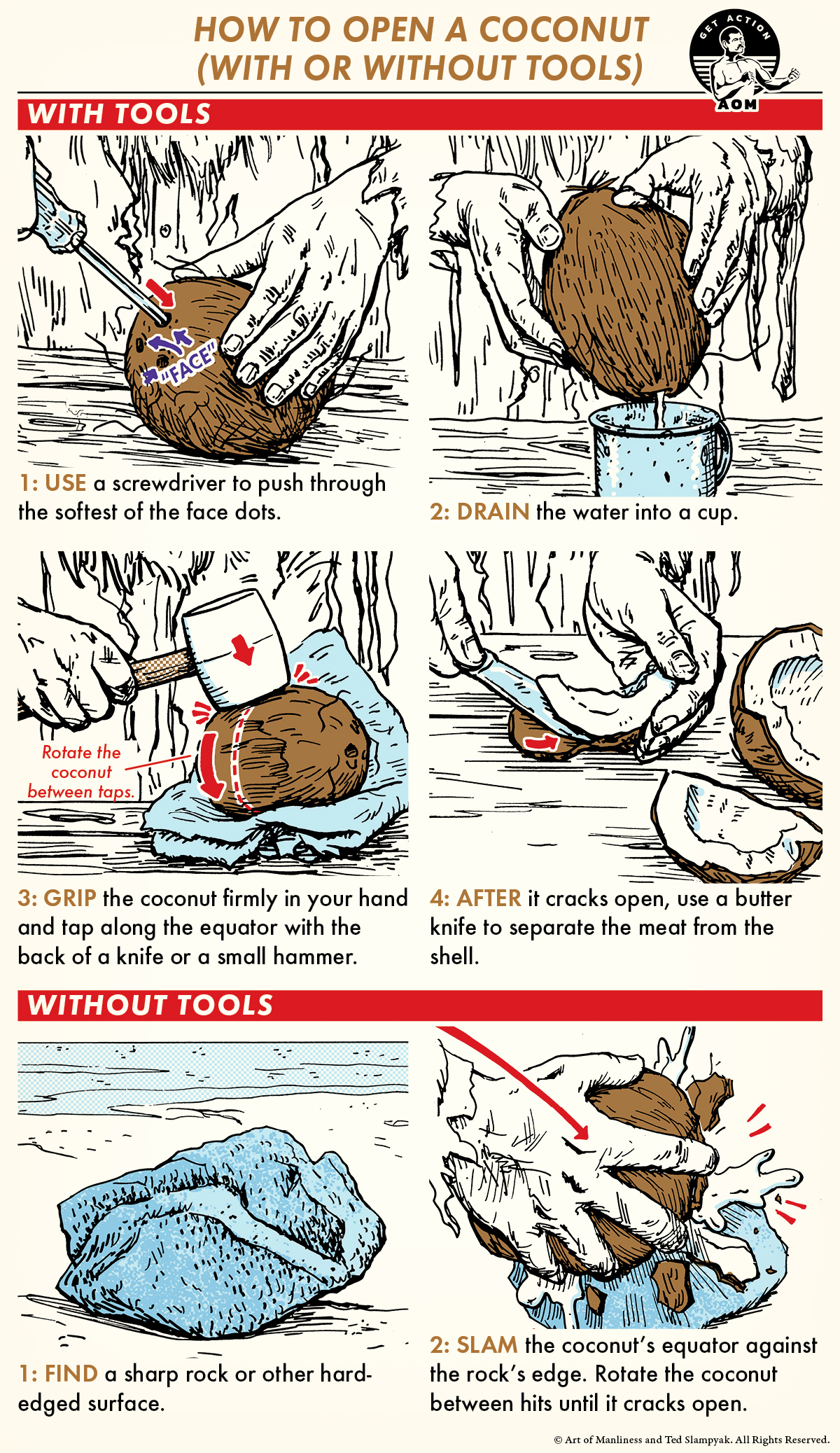 In the kitchen, fresh coconuts can add great flavor to one’s culinary pursuits. In the wild, they’re one of nature’s most perfect survival foods. Coconut meat is a great source of fat, carbohydrates, and fiber. And there’s a good reason coconut water is so readily available at stores these days: it’s loaded with minerals, electrolytes, natural sugars, and vitamins. Even when you’re done eating and drinking everything the coconut has to offer, the shell is useful as a bowl or cup. But you won’t reap any of these benefits if you don’t know how to open one up.

Cracking open a coconut takes some practice, but there are several tricks to make it a bit easier. Firstly, you’ll have to get through the husk. Store-bought coconuts have this removed already, but in the wild and in a survival situation, you’ll have to de-husk it yourself. You’ll do this by first nestling the coconut between some rocks for stability, with its pointier end facing up. Then, find the largest rock you can hoist, lift it 4-5 feet above the coconut, and drop/throw it onto the coconut. After a few drops, the husk’s fibers will begin to soften and splits will open up in it. Flip the coconut over so that the blunter end is facing up, give it another hit or two with the rock, and you should be able to peel away the husk (which doubles as great tinder for making a fire!).

Before getting started with cracking the shell and getting to the goods inside, brush up on your coconut anatomy. At the top of the coconut is the “face”: three holes grouped tightly together that resemble eyes and a mouth. These holes represent weak points that you can exploit to poke a hole in the coconut and extract the water. If you imagine the face is the north pole, and the opposite side is the south pole, it’s easy to picture the coconut’s equator. The equator is another weak point, and you can use it to crack up a coconut like a pro, with or without tools.

How to open a coconut (with or without tools)

1: Use a screwdriver to push through the softest of the face dots.

2: Drain the water into a cup.

3: Grip the coconut firmly in your hand and tap along the equator with the back of a knife or a small hammer.

4: After it cracks open, use a butter knife to separate the meat from the shell.

1: Find a sharp rock or other hard-edged surface.

2: Slam the coconut’s equator against the rock’s edge. Rotate the coconut between hits until it cracks open.