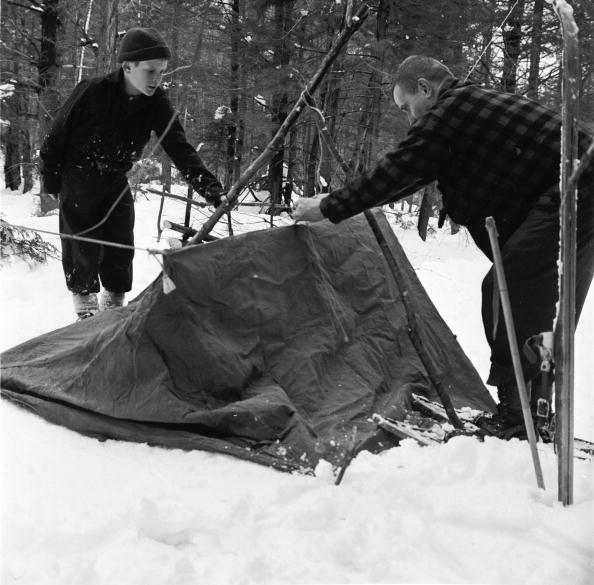 Editor’s note: The following is an excerpt from “Father, Son and the Out-of-Doors,” included in Frank H. Cheley’s The Job of Being a Dad, a book published in 1923. It has been condensed from the original chapter.

Today everything is so different. Unquestionably one of the great problems of the modern day is the tendency toward soft living; too much heat; too much dress-up clothes; soft, highly seasoned food to tease the appetite. The curse of modern city life for all of us is softness; soft lights; soft easy chairs, soft music, and a passive type of entertainment. For a few cents we buy a comfortable seat and watch someone else take our exercise and get our adventure for us. This is strikingly true, not only of men — middle-aged men — but of boys everywhere. They are victims of the age in which they live. They take their recreations that way because it is the popular way and the boys suffer tremendously. There never was in the history of the world so many soft, flabby, sallow, physically lazy youths as we have in American cities today, all because Dad has overlooked one mighty important bet. When things get soft, they rot. It is this very tendency toward softness that accounts in a large part for the “rot” that on every side among young life disturbs us. “Lord help the man — or the boy either — who has no resources for leisure hours but the exercise of his emotions instead of his legs” — and we all say, Amen!

But ignore entirely, if you please, what a larger participation on the part of father in outdoor life would mean to Dad, and consider it entirely from the standpoint of the boy. Whatever else father may or may not be, he most certainly is an instructor — not perhaps in too academic a sense, but in the larger sense of life — a father’s duty is to educate his boy for living — for big, useful, satisfactory living. Such instruction fortunately can never be given in a classroom. It must be given in the world in which the boy is to live and that world is largely out-of-doors.

Sequin, the teacher, had four fundamental rules of education that every father should adopt in dealing wisely with his boys:

Obviously such fundamental education cannot possibly be accomplished by a schoolmaster who is bound hopelessly by standards and curricula and confined to a schoolhouse. Who then is to impart this fundamental instruction to a growing, expanding youth if Father falls down on the job? What a wonderful thing it would be for the boys of the next generation if fathers everywhere would but accept Doctor Frank Crane’s recent definition of a real education and assume their rightful place in the educational process of their boys. He says, “An education (referring to training of a boy) is the instruction of the youth by his elders in all those secrets and arts which the wisdom of the world has gained, which enables one to make his life happy and healthy, which enables him to get along with his fellow-men, to understand and appreciate the rules of the game of living, to know how to treat his body so as to make it a source of the greatest efficiency and pleasure and of the least weakness and pain, and to train his mind so that he can think clearly and soundly.”

With such a conception of education, every father of a growing boy would be driven into the great, wonderful, inexhaustible out-of-doors to do things there in that choicest of all laboratories with his boy – instructing him how to live the simple, rational life by living with him.

John Ballard tells us that, “Every father who is in circumstances that permit him to enjoy hunting and fishing and outing trips of one kind or another ought to consider it a happy privilege to make his boys his companions on those expeditions. The boy who, given the opportunity, does not want to swim, fish, shoot, and live in camp is the exception. Unless spoiled by coddling, it is the nature of the species to go through a period of hearty animal existence, a period when the human frame, in natural surroundings, absorbs vital force and stamina as unconsciously as an infant learns to talk. The father, who wants to see his son develop the fiber that endures, must give the subject of the youngster’s outdoor life just as earnest attention as he does his training in school. He must bear in mind that life grows more strenuous and that the boy of the present day ought, if anything, to have more outing privileges than were available to the youth of a generation ago.”

In light of these facts, then, in what specific ways can an average father with limited time and resources at his command participate with his boy in a larger outdoor activity? Perhaps the following suggestions will prove at least thought provoking.

Indulge as often as possible in hikes with the boy. There is no place on earth or no experience (unless it be camping together) that will bring father and son together in such a friendly, comradely way as a good, long jaunt on the open road.

Study to become adept at simple woodcraft, learn the arts of fire-building, axmanship; and, in fact, all of the simple woodcraft of which boys are so fond. Camp out all night occasionally. If all the equipment is simple, home-made and inexpensive, so much the better. Learn to cook over the open fire — not the mere routine of ordinary cooking — but the woodcraft type. Learn to cook Brigand steak; to make an edible twist on a stick. Become expert at barbecueing meat, cooking beans in a hole; cooking fish and fowl in clay; roasting corn, Indian fashion, in an outdoor fireless cooker. If you do not know how, find out. There are plenty of good books on the subject, obtainable at small cost or at any Public Library.

Bicycle into the country to points of interest, but go always with a definite purpose.

Hunt with a kodak, if it is more to your liking than a gun. Certainly a kodak offers much more of absorbing interest to “shoot” and the boy will become an enthusiast.

Make a study of forestry. “Nature’s Book of Trees,” is a big, big book and full of thrills and adventure that makes red blood and clear eyes and steady hands.

Gather wild flowers and press them. Learn the mushrooms. Collect ferns. Develop a wild garden at home from specimens brought from field and forest.

Know the birds and their story. Hunt them with glasses and kodak.

Collect insects and mount them.

Learn to read the rocks together with their wonderful stories of the bygone ages.

Be a Scout and get into the Scouting game with the boys.

Help boys train eyes and ears and noses to aid them in the out-of-doors. Go winter as well as summer; little trips, big trips – do not overlook an opportunity and if you cannot get to the woods or the hills or the lakes, why garden. A father and son can study nature to their heart’s content by growing vegetables and flowers and trees and vines at home.

Finally, if you can take the boys and go for a season either to a camp of your own or to a well-organized and well-conducted camp for boys, go! The small investment will pay dividends many times over. In such camps there will be found especially fine opportunities for expression as well as impression. There is the sense of genuineness and freedom to be found there. There are the close camp friendships; there is the unusual stimulation of the imagination as a result of the close associations with the elements and with nature in general. There is the mystic power of the campfire. By the open fire is the place to plant deep in the heart of the boy the finest of ideals! There is the constant demand for ingenuity and resourcefulness. There is the unlimited opportunity for the constructive expression of ancient savagery. Camping for boys is an experience – you owe it to your boy and to yourself to get more of it.

Therefore, camp with your boy. Get acquainted with him. Let him have a chance to know his father; discover each other, if you please, and as a result of the experience you will both live longer, be happier, and accomplish more in life than you would have otherwise. Let the great, big, enticing out-of-doors be your meeting-place; your common playground.

Such a program will make father youthful, son manly, and chums of both. Try it this summer. Indulge in such activity generously for one month, and, unless you are already entirely too far gone, you will be amazed at the new enthusiasms and spirit of play and youthfulness of which you are capable; and the boy – he will be the happiest kid alive for he will have a pal. Try it, Mr. Father. It is most certainly good for “what’s the matter with you.”