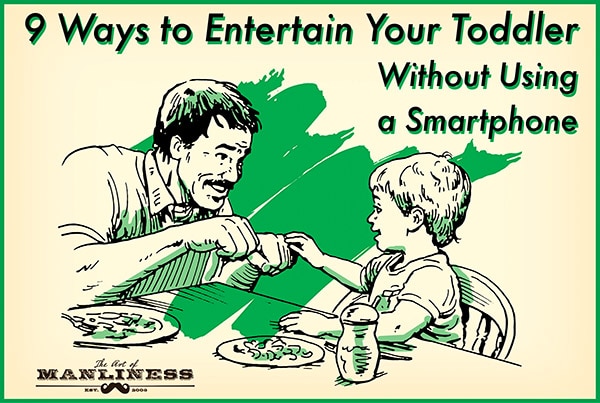 With our archives now 3,500+ articles deep, we’ve decided to republish a classic piece each Sunday to help our newer readers discover some of the best, evergreen gems from the past. This article was originally published in October 2015.

Well, with a few completely accoutrement-free games in your metaphorical back pocket, you can easily improvise some entertainments that’ll keep your little one happy and engaged before her chicken nuggets finally arrive. Here are 9 fun, brain-boosting ideas to keep on deck; some work better depending on age and ability, many can be modified to meet your toddler’s level of cognition (which is right around that of a golden retriever), and some will be equally enjoyed by the preschooler set on up. Experiment and see what captures your kiddo’s attention.

This is a great one to do at the table at a restaurant. Take a few objects — a fork, spoon, and sugar packet, for example — and tell your kid to take a careful look at the collection. Then cover the items with a napkin, and remove one of the items without him being able to see which one (lift the end of the napkin nearest you for cover as you withdraw the item). Now remove the napkin altogether, and ask your child to name which item is missing.

4. Touch Something That Is…

Classic entertainment that’s good for the slightly older kid who’s able to process the idea behind this guessing game. Pick an object both you and your kid can see, and then say, “I spy something, and it’s ____.” If your child has a basic understanding of the alphabet and a modest vocabulary, fill in the blank with a letter. “I spy something, and it begins with the letter C.” It can help to sound it out: “Ca-Ca-Ca.” For the preliterate set who knows only their colors or shapes, substitute those categories instead. You can also describe the object’s properties: “I spy something, and it’s rough and scaly/smooth and shiny.”

Come up with easy riddles for your child to solve. For example: “I have four legs and am covered in fluffy white wool. What am I?” or “I’m shaped like a circle, I have two hands, and numbers all around me. What am I?”

You can find a whole treasury of riddles for kids of all ages here.

Let your kid see your open, empty hands. Then put an object like a coin in one of your hands and close both of them. Put your hands behind your back and switch the object back and forth between them. Bring your closed hands back in front of you, and ask your child to guess which one is holding the object.