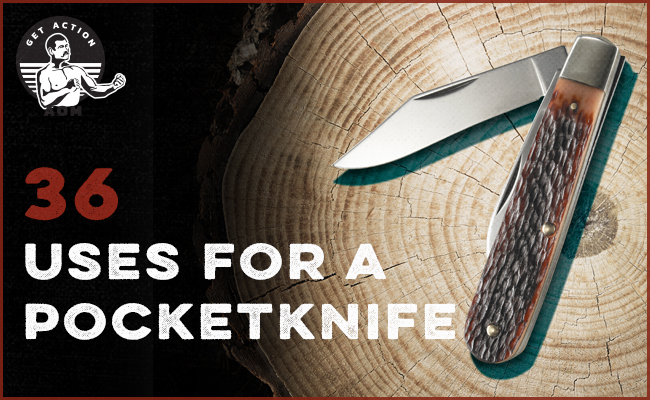 Way back in 2008, we proclaimed that every man should carry a pocketknife. If you haven’t made one part of your EDC yet, having perhaps remained unconvinced of its utility, below we list the many ways a pocketknife can come in handy on a daily basis. From making chores easier, to solving minor annoyances, to even saving a life, here are 36 uses for this timeless tool.

Note: Some of the uses listed are suboptimal for a knife and can potentially dull and damage it. Whenever possible, you should use the right tool for the job. But when you don’t have the right tool, and need to improvise in a pinch, a pocketknife can be clutch.

1. Open packages. Get at the umpteenth thousandth thing you ordered from Amazon with ease.

2. Break down packages. When you’re having trouble fitting that umpteenth thousandth Amazon box in your recycling bin, it’s time to slice through all its tape and fold it up.

3. Slice fruit. Then eat the sliced-off chunk right off the blade. Like a produce-consuming badass.

5. Cut a seatbelt. Free yourself or a loved one trapped by a jammed seatbelt inside a car that’s sinking into a lake or going up in flames.

7. Cut fishing bait. Two weems for the price of one.

8. Remove splinters. Sterilize the blade with alcohol; get digging.

10. Whittle. Carve yourself a nice little duck head to while away the time.

11. Strip/cut electrical wire. There are official wire strippers/cutters for this, of course, but a knife will work in a pinch.

12. Open a wine bottle. Takes a bit of finesse compared to a corkscrew; watch a video tutorial for the technique.

13. Cut open clothes to administer first aid. Whether you’re treating an impalement injury or gunshot wound, or applying AEDs to the chest of a heart attack victim, you first need to cut off the victim’s clothes around where you’ll be administering aid.

15. Open clamshell packaging. All packaging becomes frustration-free packaging when you open it like a heedless barbarian, stabbing and slashing with abandon.

16. Fillet a fish. For prepping your catch-of-the-day for the campfire frying pan.

17. Cut off clothing tags. You’re driving to work and realize you’ve still got one sticking out of your collar.

18. Sharpen a pencil. For when you want to feel like a real ar-teest.

19. Cut through zip ties. Which present themselves in packaging or wrapped around cables.

21. Open a letter. It’s rare to get real correspondence these days, but when you do, you want to avoid tearing through the envelope’s return address and contents by slicing it openly neatly.

22. Open a can. When you come upon a cache of delicious peaches during the apocalypse (à la father and son in The Road) and don’t have an opener.

23. Cut rope. Rope is handy for a variety of things, and sometimes you need to trim it down to size.

24. Pry out batteries. When they need replacing and are stubbornly stuck.

25. Untie a tight knot. Inserting an implement into a knot can get a tight one undone; a duller tool works best (you don’t want to cut the rope in the process), but a knife can get the job done too.

26. Cut loose threads. Those little danglers that mysteriously emerge from your clothes.

27. Perform an emergency tracheotomy. When someone’s choking and the Heimlich maneuver fails, an emergency tracheotomy may be needed, and doctors have indeed successfully performed them, using a pocket knife, in places like restaurants and airplanes (back when carrying a knife on board was kosher). The whole “being a doctor” part of these stories is of course an important consideration here.

28. Open a bottle. Use either the spine of the knife’s blade or the top scale of its handle to pry it up.

29. Cut a new hole in a belt. When you’ve gained (or lost) some weight, here’s the technique (along with some alternative ways to make a hole in a belt too).

30. Fend off a wild animal. This dude fended off a mountain lion attack with his pocketknife; this guy was able to stop a bear attack using a mere 2-inch blade.

32. Puncture and deflate those plastic packaging pillows. You know, the big bubble things you get in all those aforementioned boxes from Amazon.

33. Unscrew small screws. Not the most effective method, but works in a pinch.

35. Open a coconut. There are a variety of ways you can open a coconut, including using only a small pocket knife.

If you want to learn more about pocketknives — their parts, the different types, and much more — check out our complete guide here.