Editor’s Note: This a guest post from Will Black.

So you have started shaving with a safety razor like your handsome granddad and taking James Bond showers to stimulate your muscles with a frigid rinse at the end. Maybe you have been building your bug-out bag and practicing tying knots underwater like a Navy SEAL, all while building rituals of habit. What’s next? In answer to your questions on the title of this piece — yes, there is a way that you can visit the bathroom in the way of the masters of Bushido.

Years ago, when I was 12-15 years old, the Japanese cultural craze was starting to hit America and Samurai swords were all the rage. I would read anything I could on Japan’s ancient warriors. To this day I keep my bokken (木剣, bok(u), “wood,” and ken, “sword”), a wooden sword most commonly in the shape of the katana, as my weapon of choice by the bed.

During this period I got my hands on a copy of Dave Lowry’s book, Autumn Lightning. Dave Lowry has written articles for years for Black Belt Magazine (yes, I had a subscription at the time). In his book he chronicled his coming to hear about a Japanese sword master that lived in his neighborhood, and his subsequent work to become a student, along with many of the things that he had learned. 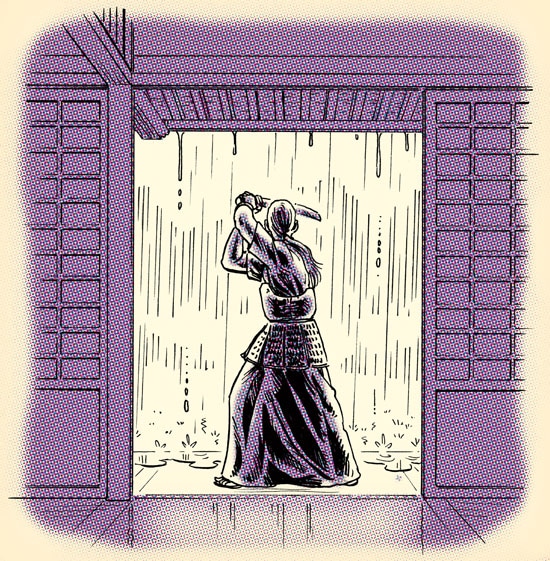 Lowry’s master never stopped training. This was due to his zanshin or “continuing mind.” Simply stated, everything he did, he did with great purpose. As he was a sword master, he continued in his study of the sword. When it rained, the master would go outside, crouch in the rain shadow under the house’s eaves, and cut rain drops dripping from the roof line as they fell. He never stopped studying what he did. Bushido taught zanshin as preparedness for battle, which could come at any time. Even, say, when one was on the toilet.

The method his master taught for relieving oneself had been passed down for generations untold. When one would go to the outhouse, he would remove his right leg fully from his clothes. This was to give him full mobility. Yes, it would be odd to fight someone off when you were on the john, but imagine your feet being tied together when you were attacked on said john vs. your legs moving freely. 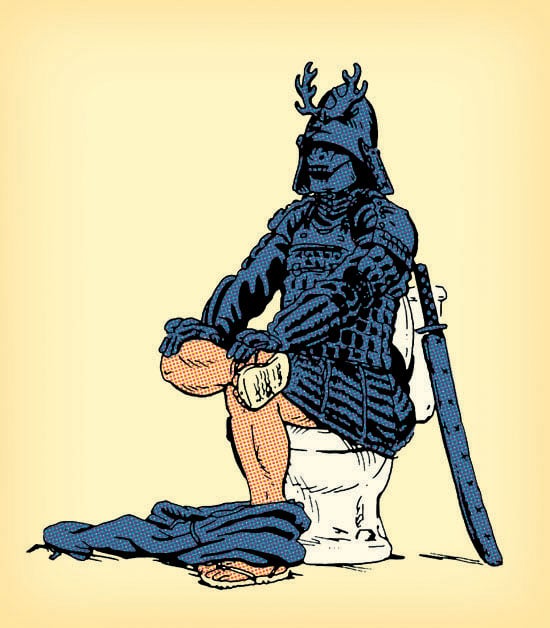 Secondly was body position and posture. The samurai would sit squarely on the seat, cross his leg so that his right ankle rested on his left knee (his left foot remained on the ground), place a hand on each knee, then straighten his back. Supposedly this aligns the bowels to help one from having to strain. You may think it seems like a bunch of malarkey, but this one actually works. If you have ever felt like there is a plumbing issue when you sit down, then pay attention. Take your time, have some patience, and you will get the yoga version of Draino on your system that has been passed down from samurai warlords of old. I have literally felt a swirling sensation during the act of evacuation. Try it out to see for yourself.

One downside is that our toilet seats are really geared towards sitting with both legs straight forward and on the ground. Another is that rarely is the seat exactly where your thigh is parallel to the ground. Most seats are too low for the average man, so it may be a strain just to get that leg up. Finally, if you really want to be technically correct in what you’re doing, you need to have a bokken in the bathroom with you. This is part of being prepared. Legs free is good. Legs free and armed is better.

Just remember these steps to help you bug-out to the bathroom next time nature calls.

Will Black runs The Meridian Foundation, a group passionate about helping businesses support the charities that inspire them by redirecting a portion of the fees that are paid to MC/Visa. If he is not in the water, he is under it, near it, or in his secret Lair hidden in his house which is his 2-year-old daughter’s favorite room.