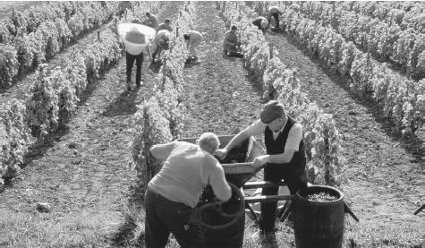 Editor’s Note: This is a guest post from Matthew Nagy. Matthew has worked as a vintage winemaker in California, New York, and New Zealand.

Let’s face it. Wine rarely conjures up the same aura of manliness that a good scotch or a great stout does. But many of the eminent men of history have enjoyed and delighted in a nice glass of red or white. From Caesar and Louis XIV to Jefferson and Franklin, men have been enjoying wine for thousands of years.

In this first segment of a two part series, we will be discussing the basics of production for both the professional and the amateur. In part two, we will turn our attention to the basics of wine knowledge–the key regions, history, and styles that will enable one to speak intelligently on the topic and make confident purchasing and tasting decisions.

It Begins with the Earth

Like all things that originate in nature, the earth where the grape is grown is the single most important aspect in our craft. The French refer to it as terrior, that little bit of je ne sais quoi that turns a good wine into a great wine. It’s true that science can offer no tangible explanation for why wine from one location can and will taste better than wine that comes from grapes grown 100 yards away, but the human taste buds do not lie and appreciable differences can often be found. Apart from soil, the three other major components that make the most difference to great wine are temperature, rainfall, and humidity. Working in New York is completely different than working in California, and the same seed of Merlot planted in both locations can yield drastically different results.

In early winter, the process starts. All of the shoots that bore last year’s fruit are cut back to the rootstock so that new vines will grow once again come springtime.  We prune so that we can control the amount of growth of each vine from the very beginning, helping to maintain the quality of the fruit that we will produce.

After lying dormant in the cold of winter, spring is possibly the most crucial time for the plant. Springtime is when the vines flower into what will eventually become the clusters of grapes that will produce the wine. We call this the fruit set, and this is where rainfall and temperature can wreak havoc on the year’s crop from its very onset. Excessive spring rain can lead to latent mildew spores that will lie dormant until fall, when they can multiply in a late heat or rain and have a damaging effect on the quality and flavor of the fruit that comes into the winery. A hard frost that hits the East Coast during the fruit set could halt the growth of over half of the grapes-to-be and ruin a vintage by May.  One of the reasons that California and the West Coast in general have taken hold of the American wine market is the moderate springs that generally bring fewer frosts and less rain than we see on the eastern seaboard.  Another benefit that California has is that summers are free of humidity (a cause of mildew and mold) and rainfall (too much rain causes the grapes to saturate with water and lose their flavor concentration).  Freedom from these variables makes the summer a relatively stress-free time in the vineyards, where only management of the canopy is really needed until harvest.

Harvest is the single most critical and stressful time for any winery or winemaker during the calendar year. Hours become longer and days off become non-existent for months at a time as the fruit begins to come in and the delicate process of fermentation starts in earnest. Nearly all wineries follow the same basic picking order for their production: sparkling wine first, then whites, and then reds. Because sparkling wines are fermented twice, they are picked with slightly higher acid levels than other white wines, so that they will stand up better to the added sugar of the second fermentation and still taste crisp and not too sweet in its final form. White wine grapes generally reach full ripeness faster than red wine grapes, and thus the end result is somewhat lower in alcohol than most of the reds that are made today. The longer grapes sit on the vine maturing, the more sugar is found in each individual berry. For the purposes of fermentation, Sugar=Alcohol.

Without getting too deep into the scientific details, fermentation for the winemaking process is where yeast, either introduced to the juice or wild, converts the sugar from the grape juice into ethanol and carbon dioxide gas.  The ripeness of the grape directly correlates to the amount of sugar that can be converted in this process, and that is one of the main determining factors in choosing when to harvest. 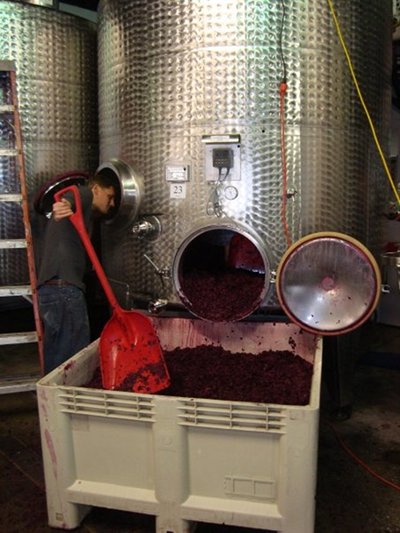 One of the biggest challenges of harvest is managing the intake of fruit into the winery. Too much fruit all at once and you will run out of vessels to store it in, but move too slowly and the grapes that are left on the vine can become susceptible to rot and over-ripening–essentially turning into raisins. So that means our job during harvest is to get the fruit in as quickly as possible while still maintaining the highest levels of quality. Days lasting longer than 15 hours per shift, or even 24 hour rotations at the bigger wineries are commonplace.  Let’s take a look at the harvest timeline for whites and reds:

That is the basic harvest process, and after its completion, it is off to the barrel room for the wines to be aged, and for the winemaker and their staff to get some much needed rest. This whole process can take as little as two stress-filled months, or last around four or five.

Patience Is a Virtue 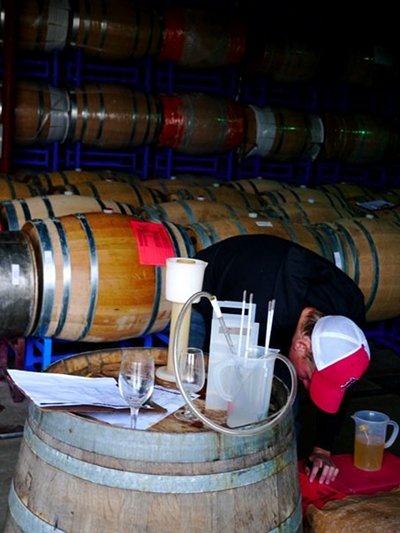 Matthew monitors the fermentation of white wine in barrel during the harvest.

After everyone has rested up and taken a holiday, the process of barrel aging begins. Many white wines will skip this step, like Sauvignon Blanc and lighter styled Chardonnays; instead, these wines will sit in a stainless steel tank until it is time for them to be blended and bottled. But, for some whites, and almost every red, the next step is to be aged in French, American, or Hungarian oak barrels for around 6 to 18 months–longer in rare cases. Introducing the new wine to oak will soften the tannins that were present in the skins and impart the flavor of the barrels themselves into the wine.

Barrel selection is a careful process, with many factors considered, such as the cooperage, the country of origin, and whether or not the barrel is considered “new.” Indeed, the most important element in barrel selection is old versus “new.” For the purposes of the winemaker, a new barrel is one that has been used once prior, or brand new from the cooperage. The old barrels are considered “neutral,” as they will not impart any wood flavors into the wine. The ratio of new and old barrels is a huge determining factor in the style of wine that is made.

Most of the work in the cellar during this time of the year is spent topping the barrels to ensure they are full, which prevents oxidation and ensures that the wine is properly sulfured. Sulfur gas or liquid is the main preservative used in wine, as it inhibits oxidization.  Attention this time of year will again be turned to the vineyard for pruning, fruit set, and canopy maintenance until it is time to blend and bottle.

The Fruits of Our Labor

Unlike fine scotches, which are almost exclusively single malt or even single barrel, the finest wines are usually a blend of the best fruit and vineyards that are available to each winery.  Almost no wine is made with 100% of a single type of grape, even if it says so on the label. Wine from every barrel or barrel type is sampled and tasted independently. After being given a grade, the best scores will be considered for the top flight blends and tasted and mixed again and again until everything is just right on the winemaker’s palate and nose.

A great palate and nose is akin to the golden goose for winemakers, and many reputations are made by the ability to blend masterfully and consistently. Smaller wineries will pay a small fortune to have a reputed winemaker consult for each vintage of wine they produce, sometimes paying him over six figures for just a few days work.

With blends done, the dirty and mundane work of filtering and bottling comes up later in the summertime. Often the bottling of a past vintage will overlap with the start of the current harvest and the winemaker’s year is complete.

I hope you enjoyed this primer on winemaking. In part two we will discuss the different styles, varietals, and regions in the wine world and give you an idea of how to start tasting and enjoying the fruits of our craft.