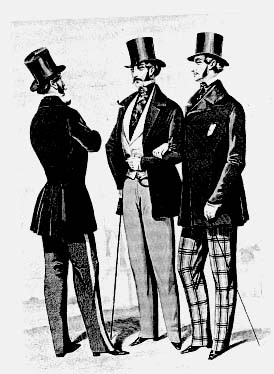 Editor’s note: The excerpt below comes from a book published in 1875: A Gentleman’s Guide to Etiquette by Cecil B. Hartley. Hartley’s rules may be over 100 years old, but they’re just as true today as they ever were. There are some real gems here — some of which truly gave me a chuckle.

1. Even if convinced that your opponent is utterly wrong, yield gracefully, decline further discussion, or dexterously turn the conversation, but do not obstinately defend your own opinion until you become angry…Many there are who, giving their opinion, not as an opinion but as a law, will defend their position by such phrases, as: “Well, if I were president, or governor, I would,” — and while by the warmth of their argument they prove that they are utterly unable to govern their own temper, they will endeavor to persuade you that they are perfectly competent to take charge of the government of the nation.

2. Retain, if you will, a fixed political opinion, yet do not parade it upon all occasions, and, above all, do not endeavor to force others to agree with you. Listen calmly to their ideas upon the same subjects, and if you cannot agree, differ politely, and while your opponent may set you down as a bad politician, let him be obliged to admit that you are a gentleman.

3. Never interrupt anyone who is speaking; it is quite rude to officiously supply a name or date about which another hesitates, unless you are asked to do so. Another gross breach of etiquette is to anticipate the point of a story which another person is reciting, or to take it from his lips to finish it in your own language. Some persons plead as an excuse for this breach of etiquette, that the reciter was spoiling a good story by a bad manner, but this does not mend the matter. It is surely rude to give a man to understand that you do not consider him capable of finishing an anecdote that he has commenced.

4. It is ill-bred to put on an air of weariness during a long speech from another person, and quite as rude to look at a watch, read a letter, flirt the leaves of a book, or in any other action show that you are tired of the speaker or his subject.

5. In a general conversation, never speak when another person is speaking, and never try by raising your own voice to drown that of another. Never assume an air of haughtiness, or speak in a dictatorial manner; let your conversation be always amiable and frank, free from every affectation.

6. Never, unless you are requested to do so, speak of your own business or profession in society; to confine your conversation entirely to the subject or pursuit which is your own specialty is low-bred and vulgar. Make the subject for conversation suit the company in which you are placed. Joyous, light conversation will be at times as much out of place as a sermon would be at a dancing party. Let your conversation be grave or gay as suits the time or place.

7. In a dispute, if you cannot reconcile the parties, withdraw from them. You will surely make one enemy, perhaps two, by taking either side, in an argument when the speakers have lost their temper.

9. A man of real intelligence and cultivated mind is generally modest. He may feel when in everyday society, that in intellectual acquirements he is above those around him; but he will not seek to make his companions feel their inferiority, nor try to display this advantage over them. He will discuss with frank simplicity the topics started by others, and endeavor to avoid starting such as they will not feel inclined to discuss. All that he says will be marked by politeness and deference to the feelings and opinions of others.

10. It is as great an accomplishment to listen with an air of interest and attention, as it is to speak well. To be a good listener is as indispensable as to be a good talker, and it is in the character of listener that you can most readily detect the man who is accustomed to good society.

11. Never listen to the conversation of two persons who have thus withdrawn from a group. If they are so near you that you cannot avoid hearing them, you may, with perfect propriety, change your seat.

12. Make your own share in conversation as modest and brief as is consistent with the subject under consideration, and avoid long speeches and tedious stories. If, however, another, particularly an old man, tells a long story, or one that is not new to you, listen respectfully until he has finished, before you speak again.

13. Speak of yourself but little. Your friends will find out your virtues without forcing you to tell them, and you may feel confident that it is equally unnecessary to expose your faults yourself.

14. If you submit to flattery, you must also submit to the imputation of folly and self-conceit.

15. In speaking of your friends, do not compare them, one with another. Speak of the merits of each one, but do not try to heighten the virtues of one by contrasting them with the vices of another.

16. Avoid, in conversation all subjects which can injure the absent. A gentleman will never calumniate or listen to calumny.

17. The wittiest man becomes tedious and ill-bred when he endeavors to engross entirely the attention of the company in which he should take a more modest part.

18. Avoid set phrases, and use quotations but rarely. They sometimes make a very piquant addition to conversation, but when they become a constant habit, they are exceedingly tedious, and in bad taste.

19. Avoid pedantry; it is a mark, not of intelligence, but stupidity.

20. Speak your own language correctly; at the same time do not be too great a stickler for formal correctness of phrases.

21. Never notice it if others make mistakes in language. To notice by word or look such errors in those around you is excessively ill-bred.

22. If you are a professional or scientific man, avoid the use of technical terms. They are in bad taste, because many will not understand them. If, however, you unconsciously use such a term or phrase, do not then commit the still greater error of explaining its meaning. No one will thank you for thus implying their ignorance.

23. In conversing with a foreigner who speaks imperfect English, listen with strict attention, yet do not supply a word, or phrase, if he hesitates. Above all, do not by a word or gesture show impatience if he makes pauses or blunders. If you understand his language, say so when you first speak to him; this is not making a display of your own knowledge, but is a kindness, as a foreigner will be pleased to hear and speak his own language when in a strange country.

24. Be careful in society never to play the part of buffoon, for you will soon become known as the “funny” man of the party, and no character is so perilous to your dignity as a gentleman. You lay yourself open to both censure and bad ridicule, and you may feel sure that, for every person who laughs with you, two are laughing at you, and for one who admires you, two will watch your antics with secret contempt.

25. Avoid boasting. To speak of your money, connections, or the luxuries at your command is in very bad taste. It is quite as ill-bred to boast of your intimacy with distinguished people. If their names occur naturally in the course of conversation, it is very well; but to be constantly quoting, “my friend, Gov. C,” or, “my intimate friend, the president,” is pompous and in bad taste.

26. While refusing the part of jester yourself, do not, by stiff manners, or cold, contemptuous looks, endeavor to check the innocent mirth of others. It is in excessively bad taste to drag in a grave subject of conversation when pleasant, bantering talk is going on around you. Join in pleasantly and forget your graver thoughts for the time, and you will win more popularity than if you chill the merry circle or turn their innocent gayety to grave discussions.

27. When thrown into the society of literary people, do not question them about their works. To speak in terms of admiration of any work to the author is in bad taste; but you may give pleasure, if, by a quotation from their writings, or a happy reference to them, you prove that you have read and appreciated them.

28. It is extremely rude and pedantic, when engaged in general conversation, to make quotations in a foreign language.

29. To use phrases which admit of a double meaning, is ungentlemanly.

30. If you find you are becoming angry in a conversation, either turn to another subject or keep silence. You may utter, in the heat of passion, words which you would never use in a calmer moment, and which you would bitterly repent when they were once said.

31. “Never talk of ropes to a man whose father was hanged” is a vulgar but popular proverb. Avoid carefully subjects which may be construed into personalities, and keep a strict reserve upon family matters. Avoid, if you can, seeing the skeleton in your friend’s closet, but if it is paraded for your special benefit, regard it as a sacred confidence, and never betray your knowledge to a third party.

32. If you have traveled, although you will endeavor to improve your mind in such travel, do not be constantly speaking of your journeyings. Nothing is more tiresome than a man who commences every phrase with, “When I was in Paris,” or, “In Italy I saw…”

33. When asking questions about persons who are not known to you, in a drawing-room, avoid using adjectives; or you may enquire of a mother, “Who is that awkward, ugly girl?” and be answered, “Sir, that is my daughter.”

34. Avoid gossip; in a woman it is detestable, but in a man it is utterly despicable.

35. Do not officiously offer assistance or advice in general society. Nobody will thank you for it.

37. A lady of sense will feel more complimented if you converse with her upon instructive, high subjects, than if you address to her only the language of compliment. In the latter case she will conclude that you consider her incapable of discussing higher subjects, and you cannot expect her to be pleased at being considered merely a silly, vain person, who must be flattered into good humor.