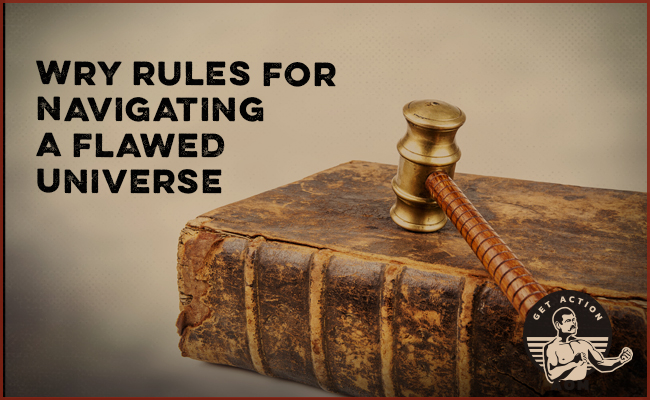 When we think about the principles which govern the universe, we typically think of laws which concern the realms of science and mathematics. Yet we also intuitively feel that there are equally universal laws unrelated to physics or calculus that explain the dynamics of social interactions, work, and the ordinary vicissitudes of daily life.

Writer Paul Dickson has been compiling such principles for forty years. Inspired by Murphy’s Law (“If anything can go wrong, it will”), Dickson decided in 1976 to start a collection of “odd mock-scientific rules and laws that helped describe our flawed universe.” At first he just filed bits of revealed truth — sourced from both eminent history-making figures and average pencil-pushing joes — into a cardboard shoebox he wryly dubbed “The Murphy Center for the Codification of Human and Organizational Law.”

With his own research and the contributions of others, the number of laws compiled at “The Murphy Center” grew. In 1979, Dickson published them in a book called The Official Rules. Thousands more such maxims were submitted to him by its readers, and incorporated into subsequent editions of the book.

A few years ago, I picked up the latest edition — The Official Rules: 5,427 Laws, Principles, and Axioms to Help You Cope with Crises, Deadlines, Bad Luck, Rude Behavior, Red Tape, and Attacks by Inanimate Objects. The book has since become a well-worn, dog-eared, and much-underlined part of my library.

The rules contained in this hefty tome are the kind of simple sayings that reveal truths that seem obvious once they’re spelled out, but which you hadn’t previously been able to put into words. They’re the kind of quotes grandparents hang up on their refrigerators and employees peg to a bulletin board to give their office mates a gallows-humor chuckle about corporate life.

The rules can be droll and satirical but also pack a serious insight. As you read through them, they can come off as pessimistic and cynical (many read like the writings of Machiavelli or Baltasar Gracián). But Dickson’s goal isn’t just to collect an assortment of curmudgeonly philosophies designed to inculcate a contemptuous and derisive view of life. Rather, these observations on the realities of living in a frail, frustrating world amongst flawed human beings are meant to function as coping mechanisms, helping the reader set reasonable expectations for navigating this crazy life and laugh at the setbacks inherent to inhabiting a universe headed towards entropy.

“The central principle of the [Murphy] Center,” Dickson writes, “was and is that the more one understood the imperfectability of things, the more one can get out of life.”

Below I share a sampling of my favorite entries from The Official Rules. I highly recommend getting a copy for yourself — it makes for an incomparable bathroom book.