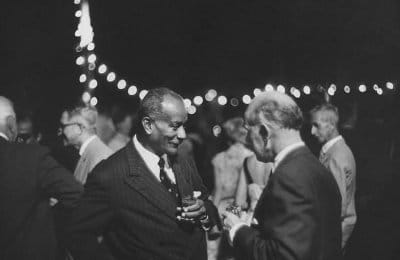 I think we’ve all encountered men who have a knack for good conversation. They can talk to anybody about anything in a laid-back, casual manner that sets people immediately at ease.  A complete stranger can walk away from these conversational maestros feeling like he’s known known them for years.

It’s easy to think that the art of conversation is a skill that the gods bestow on a happy few, while cursing most men with turbid tongues.

While it’s true that some men simply have a greater portion of innate natural charm, the art of conversation is a skill in which all men can become competent. You may never have a silver-tongue, but you can learn to converse in ways that make you a valued party guest, set you apart at company functions, impress the ladies, and win you new friends. Below, we provide some tips and guidelines as an introduction (or reminder) on properly engaging in conversation.

Listen more than you talk. Ironically enough, the key to the art of conversation is not in the talking, but in the listening. Avoid conversational narcissism. Ask those you converse with interesting and thoughtful questions. People love to talk about themselves. Don’t ask what someone does and leave it at that. Ask them what the hardest part of their job is, how the future of their profession looks. Then ask follow-up questions to tease out more details. Act genuinely interested by focusing on who’s talking, nodding your head, and adding “hmmms” and “uh-huhs” at appropriate moments.

Come to an occasion armed with topics at the ready. On the way to a party or dinner, I think about the people I will be seeing that night and brainstorm stories I can tell and questions I can ask. “George will like to hear about how the woodshed is coming along. Grace just got back from seeing her folks in Minnesota, so I’ll ask about that, and I’ll see what Tyler thought about that book he just finished.”

If you don’t know the people you will be conversing with, think about the things that will probably interest those you meet. Ask them about the unique aspects of their locale (“I saw an interesting statue in the way into town. What’s the story behind it?”), read up on the company they work for (“I hear you will be expanding into China soon; when will that be happening?), and ask those who do know the others better for some background information.

Tailor the conversation to the listener. It’s easy to say, “Don’t talk politics, sex, or religion.” And when in any doubt, don’t. But a much better rule is simply to tailor your conversation topics to those you are conversing with. Talking about politics, religion, and sex with new acquaintances can be awkward; arguing with the same buddies you’ve been arguing with for ten years at your weekly poker night can be the highlight of the week. Talking about motorcycles in mixed company will bore half the room; not talking about them with your riding posse would be unthinkable.

Take your turn. A conversation is a group project, with each person weaving in a tidbit here and there. It’s no time for monologues. If you notice that you have talked for a few minutes without any questions, comments, or general signs of life from other people, you are likely sucking up the air in the room. Cede the floor to someone else.

Think before you speak. Most foot-in-mouth moments occur because of a failure to think before speaking. You rant about the war and then remember your friend’s boyfriend just returned from Iraq. To avoid offending, don’t throw out statements laden with value-judgments. For example, instead of saying, “The mayor sure is a moron, huh?” Ask, “What do you think of the mayor’s rebuilding proposal?”

“The obvious one, interrupting the speaker in mid-sentence, is easy to avoid: just wait until the other has stopped talking before you start. (And don’t ever say, “Have you finished?” You might as well say right out that he’s a windy numskull and you thought he’d never run down.) The other kind of interruption, equally culpable, is often prefaced by “That reminds me…” or “By the way.” Such phrases usually signal a digression or irrelevancy. When you interrupt another’s train of thought, or send a discussion off into a tangent, you indicate that you are either stupid or rude, either unable or unwilling to stick with the speaker’s point.

Even if everyone observed these rules, telephones, doorbells and new arrivals would always conspire to interrupt you in mid-point. When you are interrupted, the politest thing to do is the hardest thing: shut up. Don’t go back and finish a story — don’t excavate a buried point — unless you are asked to do so. If a new listener has come up in mid-story, a polite someone else will brief him on the subject and ask you to go on; the polite newcomer will second the nomination; only then, with the briefest possible synopsis of what you said before, can you go on. If you are not given these cues, it may be because your story is not appropriate for the newcomer’s ears or because the situation gets beyond control; it’s not always because your audience was bored. So, if you get a chance to make your point later on, don’t air your annoyance with a petulant, “As I was trying to say a little earlier…”

Don’t talk to only one person when conversing in a group. This leaves the others dangling and awkward on the periphery. This is not simply a matter of whom you are physically conversing with — you can also ice people out by choosing subjects on which they have no interest or knowledge, such as the intricacies of your job that only your co-worker understands and inside jokes and “remember whens” with your buddy. Bring up topics on which everyone can chime in.

Don’t engage in “one-upping.” The one-upper not only makes a lousy friend, he also makes a highly annoying conversationalist. You say you just bought some new boots; he raises you one by talking about the shoes he cobbled together himself with leather he got by killing a deer with only a bowie knife. The one-upper believes that his stories show his superiority; on the contrary, they reveal his naked insecurity.

Don’t overshare. We’ve all met the man who pours out his life story as soon as you meet him. Within two minutes you know why his girlfriend dumped him, how worried he is about losing his hair, and why he’ll never be promoted at work. This instant unburdening reads as desperation and repels people faster than water off a duck’s back. You have to cultivate a little mystery; leave people intrigued and wanting more.

And at the same time, you don’t want to dig too deeply into the personal life of other people either. Respect the privacy of others. To avoid inadvertently touching on a sensitive spot, instead of asking someone about X, volunteer that information about yourself. A person who is comfortable talking about X will typically offer up their own experience in turn. If they don’t respond in kind, change the subject.

4 Things Not to Say

An embarrassing question — the person will never answer no, it comes off a bit accusatory (the person will feel as though they were looking at you with an uninterested expression), and even if you weren’t previously boring them, the power of suggestion will plant the idea in their head that the conversation had been rather tedious after all.

Instead of asking a question like that outright, simply pay attention to the person’s facial expressions and body language. If they look bored, they probably are. Time to switch things up.

Too abrupt. The speaker will feel awkward. Instead ask, “What was the last thing you said? I didn’t catch it.” And don’t nod and smile when you don’t know what was just said. Sometimes it works; sometimes the person just said, “A dingo made off with my baby last night.”

If grammatical mistakes make the hair on the back of your neck stand up, you may find it difficult to restrain yourself from correcting the errors of others. But a conversation is no time to be pedantic. You’ll come off as smug and patronizing and bring any rapport you were building with a person to a screeching halt. Don’t miss the forest for the trees.

Actually, if grammatical mistakes make the hair on the back of your neck stand up, you might want to look into taking up some new hobbies.

“Stop me if I’ve told you this story before…”

No one will ever stop you. So your question just prolongs the time they have to act like they’ve never heard the story of the time you almost ran over Barry Switzer while he was riding his fixed gear bicycle near the OU dorms.

Read up on 5 more things you shouldn’t bring up in conversation.

The Number One Rule of Conversation: Be Natural

As with most matters of etiquette and sociality, once you understand the ground rules, stop thinking about them so much and let things flow. You can follow all the above dos and dont’s, but if it seems to others like your conversating by a checklist, then you might as well be waxing poetic about your butt hair. It doesn’t matter how polite you are if you come off as a phony. Drop the affectations. Talk about things that you’re comfortable talking about; use words that you’re comfortable using. As Esquire Etiquette advises:

“You’ve often heard that what you say and how you say it is a first impression give-away to your character and your background — but there’s a sleeper in that bromide: It’s a bigger give-away to pretend to be something you are not than to be what you are without apology. No matter what the lady-books say about “cultivated speech,” a man’s speech had best not be cultivated; it ought first of all to be natural…The pretty politeness of speech you find in the girls’ books are not for you, sir. If you mean “Sorry,” say “Sorry” — not I’m so sorry,” not “I beg your pardon.” If you mean that the dinner was damned good say so; don’t mince around with uneasy words like “exquisite” or “lovely.” Leave the “my dears” to the aged, and “do comes” to the feminine gender. And forget about the supposedly gallant phrases like “Allow me” and “After you.” It is not etiquette to say things the long way or the fancy way. Be yourself. Be a man.”

What are your tips for mastering the art of conversation? Share them with us in the comments!