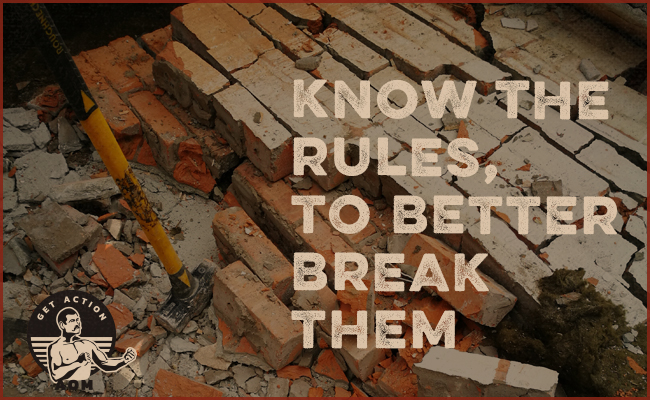 Though something of an iconoclast himself, Fr. Richard Rohr argues that “it is much easier to begin [life] rather conservative or traditional” than it is to be raised without structure and limits.

This observation is true not just of life itself, but every area within it. No matter the habit, project, or pursuit, it’s best to begin by first adhering to its most disciplined set of protocols.

It is difficult to create a path for yourself ex nihilo. When you start in a vacuum, you float and flounder. It’s easier to get going when you’ve got something to riff on and push off; when you’re working with a set of existent materials — which can then be added to, rearranged, discarded.

A new adherent to a faith who first follows the letter of the law, becomes better able to figure out the spirit of it.

A would-be sartorialist who first practices the norms of classic style, more deftly transitions to finding his own.

A novice writer who masters the guidelines of good grammar, earns the judgement to fiddle with proper punctuation.

While you may later come to be a little embarrassed by your “zealous convert” phase when you kept every guideline with fervent exactitude, passing through such a rigid period is not only healthy, but often necessary.

Learning the time-tested fundamentals creates confidence and a stable structure on which to build. As Rohr says, you transcend what doesn’t work, and include what does. You develop your own perspective, without losing sight of tradition.

If you “rebel” before you’ve ever adhered to a standard, you avoid conformity to it, but you’ll rarely find the energy and direction to produce anything original, either (and what’s more bourgeois than that?).

As a wise saying goes, “Know the rules well, so you may break them effectively.”