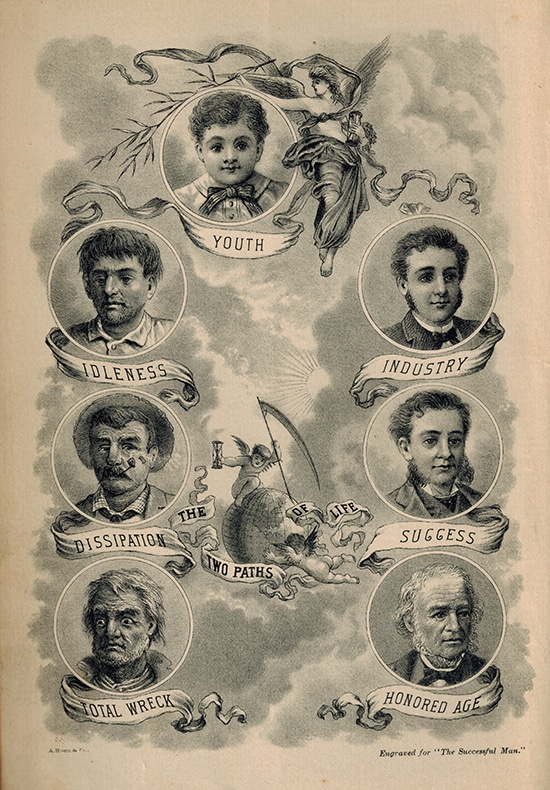 It’s a new year and people all over the world are making resolutions on how they’re going to improve themselves. Usually these goals consist of doing something new or adding a habit to their lives: get back into exercising, start journaling, launch a side hustle, adopt the Paleo diet, earn more money, etc.

But after a few weeks of motivated effort, most folks start to lose steam. They stop going to the gym, never sign up for that woodworking class, and go back to eating Pop Tarts and Doritos. And then they feel like crap because they haven’t made any progress on improving themselves.

There’s nothing wrong with making these types of positive goals, but they’re not the only way to improve your life. Just as effective as adding something to our lives, if not more so, is subtracting the things that might be holding us back.

In truth, oftentimes the path to becoming a better man is found in following the via negativa — the negative way.

Via Negativa Your Way to a Better Life

Via negativa is a Latin phrase used in Christian theology to explain a way of describing God by focusing on what he is not, rather than what he is; understanding Deity’s positive qualities is a task deemed impossible for the finite minds of humans.

Via negativa can also be used to describe a similarly “negative” way of improving one’s life; instead of concentrating on what you do, the focus turns to what you don’t do. This path has two main thrusts: stripping bad habits and situations out of your life, and avoiding bad habits/situations in the first place.

Getting Rid of Bad Habits/Downside

In his book Antifragile, Nassim Taleb argues that the best way for a person or organization to become antifragile (something that gains from setbacks and chaos rather than just survives) is to first decrease their downside. Downside consists of those things, people, actions, habits, or systems that make you vulnerable to volatility and risk. For example, debt isn’t much of a problem when you have enough money coming in to make your payments, but as soon as you lose your job, that debt becomes a really big problem, really fast.

But downside can create a handicap even when volatility doesn’t exist. Take the debt example again. Money you shunt over to your monthly payment is money that could have been used for more productive purposes like starting a business or taking a class to learn a new skill. Downside limits your options in life.

By focusing your efforts on eliminating that debt, you eliminate the risk of falling behind on payments and you free up money to be spent on increasing your upside in life.

Smoking is a huge downside to your health; removing the smoking habit from your life provides more benefit than adding more exercise to your daily routine and protein to your diet.

Toxic relationships are a downside to your emotional and psychological well-being. Just ask someone who has been in an abusive relationship how much every area of their life improved once they got rid of that interpersonal albatross.

Not only can eliminating bad habits be a highly effective way to improve your life, it’s also often a lot easier than creating a new, positive habit. Positive habits take a lot of motivation and willpower to cultivate. But not doing something is much simpler. For example, if you’re significantly overweight, switching to a low carb diet is going to shed those lbs for sure, but it ain’t easy to stick with. Eliminating soda, on the other hand, is comparatively a cinch. Dropping the sugar water habit isn’t going to turn you into a trim athlete, but it’ll get you on your way; once you’re closer to your goal, and feeling some momentum, you can start making more significant, positive changes to your diet.

“I have used all my life a wonderfully simple heuristic: charlatans are recognizable in that they will give you positive advice, and only positive advice, exploiting our gullibility and sucker-proneness for recipes that hit you in a flash as just obvious, then evaporate later as you forget them.” -Nassim Taleb

Taleb argues that removing downside is just one part of via negativa. The other part is to simply avoid downside in the first place.

Because we have a bias towards positive action, it’s hard for us to focus on how avoiding downside is a plus; we recognize when things go right, but fail to notice when something bad didn’t happen. This bias manifests itself in the way businesses reward success. Corporations will handsomely reward CEOs who substantially increase shareholder value during a boom time, but won’t provide the same sort of bonuses to the CEO who takes prudent measures that prevent the company from losing its metaphorical shirt during a bust.

However, in the long run, not going bust is the best path towards success – you can’t make any money if you’re bankrupt! As Taleb notes:

“In practice it is the negative that’s used by the pros, those selected by evolution: chess grandmasters usually win by not losing; people become rich by not going bust (particularly when others do); religions are mostly about interdicts; the learning of life is about what to avoid. You reduce most of your personal risks of accident thanks to a small number of measures.”

Or as Berkshire Hathaway Vice-Chairman Charlie Munger put it, “It is remarkable how much long-term advantage people like us have gotten by trying to be consistently not stupid, instead of trying to be very intelligent.”

I know a few very smart and talented individuals whose lives are in utter shambles despite their gifts. And it’s because they keep making stupid and avoidable mistakes. They consistently add wholly unnecessary downside to their lives.

If they had done nothing really positive, but had simply avoided the DUIs, the drug arrests, the out-of-wedlock births, the affairs, and the consumer debt, their lives would have been vastly superior to the ones they have now.

Let that sink in: doing nothing would have given these people a better life than they have now.

I sometimes hear people carp that the Ten Commandments or other religious edicts focus too much on restricting behavior, and don’t focus enough on positive actions. But perhaps there’s wisdom in focusing on the “thou shall nots.” If you can go through life not murdering people, not lying, not sleeping with your neighbor’s wife, and not filled with envy, you’re going to have a pretty good life.

Following via negativa may seem like a defensive and risk-averse way to live. But by focusing on what you don’t do, you actually put yourself in a position to be more aggressive with life. The man who has never been arrested, doesn’t have debt, and doesn’t have the drama that comes with bad relationships has more opportunities presented to him and more money, energy, and willpower to capitalize on those opportunities when they appear; the man who has gone though life making stupid mistakes, doesn’t. In other words, you’ll never get a chance to work on the “shalls” if your life’s been wrecked by ignoring the shall nots.

Invert. Always Invert, or What Kind of Man Do I NOT Want to Be?

The great German algebraist Carl Jacobi had a maxim on how to approach difficult math problems: “Invert. Always Invert.” Oftentimes the best way to gain clarity about a problem is to address it backwards.

I think you’ll be surprised at the insights you’ll get from the answers to these via negativa questions.

If you have stupid stuff in your life, remove it. Reducing the downside will have immediate and noticeable gains that you won’t get with positive actions.

If you’ve already eliminated a lot of bad habits from your life (or never started them in the first place), take via negativa to the next level by eliminating stuff that might be good, but takes you away from focusing on the best things in life. On his blog, Cal Newport shared an anecdotal story about Warren Buffet that illustrates the importance of choosing the best over the good:

“Buffett wanted to help his employee get ahead in his working life, so he suggested that the employee list the twenty-five most important things he wanted to accomplish in the next few years. He then had the employee circle the top five and told him to prioritize this smaller list.

All seemed well until the wise Billionaire asked one more question: ‘What are you going to do with the other twenty things?’

The employee answered: ‘Well the top five are my primary focus but the other twenty come in at a close second. They are still important so I’ll work on those intermittently as I see fit as I’m getting through my top five. They are not as urgent but I still plan to give them dedicated effort.’

Buffett surprised him with his response: “No. You’ve got it wrong…Everything you didn’t circle just became your ‘avoid at all cost list.’”

Steve Jobs said something similar in an interview a few years ago:

“People think focus means saying yes to the thing you’ve to focus on. But that’s not what it means at all. It means saying no to the hundred other good ideas that there are. You have to pick carefully. I’m actually as proud of the things we haven’t done as the things I have done. Innovation is saying no to 1,000 things.”

Eliminating obvious downsides like bad habits and debt will provide a good life; eliminating good things so you can focus on the very best will lead to a truly flourishing life.

Besides eliminating downside (and possibly good, yet best-distracting activities), resolve this year and for the rest of your life to avoid stupid mistakes; when you see red flags a-wavin’, turn and walk the other way. I promise your life will be much easier and filled with more opportunity if you do.

If you’ve already made a bunch of stupid mistakes in your life, don’t despair. Yes, you’ve dug yourself into a hole, but the first step to getting out of that hole is to stop digging. Resolve today that you’re going to avoid stupid life-altering mistakes whenever possible. After that, start working your way out of that hole by doing what you have to do to make things right. It won’t be easy and it will take time, but improvement and turnarounds are possible. Plenty of people have done it before and so can you.

What are your via negativa goals this year?