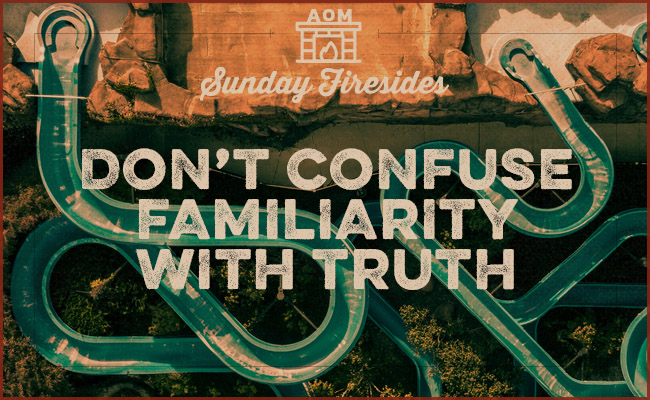 When navigating the world, our brains often use heuristics, mental shortcuts, to make decisions. One of these centers on familiarity. If we’ve used/known/seen something before, we’re likely to choose it over something novel/strange/untested.

People pick a surgeon based less on his credentials than the fact he’s a friend of a friend; invest in stocks based less on a company’s prospects than its name recognition; stay with a live-in partner less out of love than inertia.

A man raised in a traditional church who visits a modern one says that it felt like the wrong way to worship, and vice versa.

We figure that our current job, our current girlfriend, our current buddies are probably the best ones for us. We think being the fat funny guy, or the caustic skeptic, is who we really are.

A new political or philosophical idea seems heretical compared to our present beliefs.

The familiarity heuristic can be useful; what’s worked before often works again. Sometimes the right thing, and the familiar thing, do align. Sometimes, however, the familiar can feel good, can feel true, when really, it’s simply comfortable.

Sometimes we hold onto known quantities, long after they’ve stopped working for us. Our old ways of doing things fit us like a well-worn t-shirt . . . three sizes too small.

If you put a wolf who’d grown up in a zoo into the wild, the open, cage-free landscape would feel all wrong compared to one he was used to. Yet, it would be the environment in which he truly belonged.

We willingly confuse familiarity with truth because the former allows us to take an easy pre-carved route, while choosing something different involves bushwhacking a new path.

Sometimes a machete must be taken in hand, though. The devil you know may be comforting, but he’s still a devil.