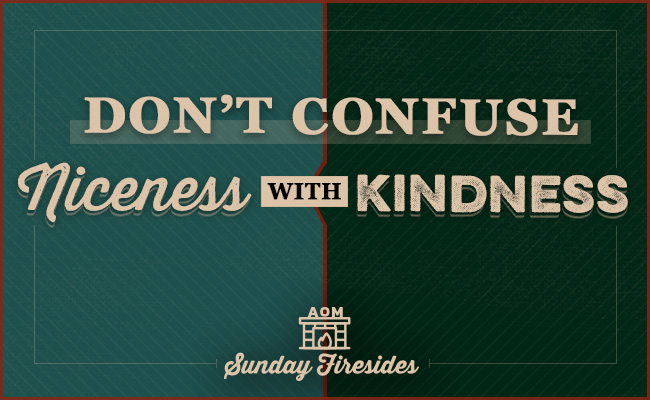 We often use the words “nice” and “kind” synonymously.

But it can be helpful to distinguish between the two qualities, as Eric Kapitulik, Marine special operator and leadership coach, does.

Being nice means making people feel good in the short-term. Behaving politely. Offering a smile and a pat on the back. Exchanging pleasantries. Avoiding arguments.

Being kind, on the other hand, means doing what’s best for someone in the long-term, even when it might not make them feel great in the moment.

Oftentimes, we can, and should, be both nice AND kind. But sometimes, the two qualities conflict.

Buying your kid a toy to soothe his tantrum might be nice, but depriving them of the chance to practice delayed gratification isn’t kind.

Not saying anything when a teammate starts slacking off might be nice, but allowing them to squander their potential isn’t kind.

Not breaking up with someone with whom you know there’s no future might be nice, but robbing them of the time they could be spending finding a better match isn’t kind.

Acting like you agree with a friend’s misguided beliefs might be nice, but tacitly encouraging them to continue down a destructive path isn’t kind.

It’s nice to be nice, but it’s more important to be kind. And as Kapitulik observes, choosing the latter requires sacrifice.

When we choose to be nice instead of kind, we’re choosing our own comfort over helping someone else find real happiness and become their best self. Which, when you think about it, really isn’t so nice after all.