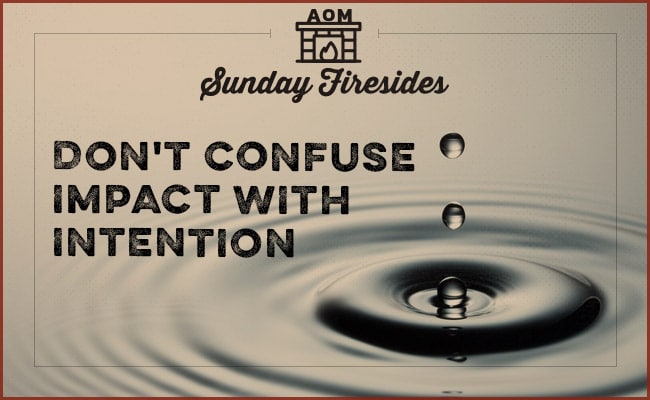 Someone says something (or doesn’t). You get a text (or don’t). And something in the message (or lack thereof) makes you feel bad/sad/angry/snubbed.

Very often we then make the perilous leap described by the authors of Difficult Conversations: “We assume intentions from the impact on us.” That is, we judge the intent behind someone’s action based on how that action made us feel. E.g., “If I feel ignored, then she intended to ignore me.” “If I feel insulted, then he intended to insult me.”

From this first perilous leap comes another: we assume someone’s bad intentions spring from their inherently bad character. “She ignored me because she’s self-absorbed.” “He insulted me because he’s petty and insecure.”

But these potentially relationship-unraveling guesses are frequently wrong. (They can also become self-fulfilling prophecies: you think she’s ignoring you, so you ignore her, so she starts actually ignoring you.)

You must separate intentions from impact by first being as charitable with others as you are with yourself. When you see someone driving like a madman, you think, “What an inconsiderate prick.” When you drive like a madman, you think, “I have to get to this job interview in time.” When someone else drops the ball on something, it’s because they’re thoughtless; when you do it, it’s because you’re crazy busy.

Then, instead of accusing someone of bad intent — “Why do you ignore me like this?” — which will only make them feel defensive, propose your interpretation as a hypothesis: “I might be wrong, but I get the sense that you’re ignoring me. Am I off base in thinking that?” Give the other person the opportunity to explain themselves before you jump to conclusions. There’s a good chance that the impact their actions had on you, wasn’t their intent at all.