Editor’s note: This is Part 1 of a 2 part series by Tyler Tervooren of Advanced Riskology.

It’s a rare man that doesn’t—at some juncture of his life—stop to question how things might be different if he worked for himself. Even a man who loves his job occasionally wonders what it might be like to strike out on his own and follow some crazy, half-baked notion.

Self-employment is a dream held by many men but acted on by few.

The reasons for this are many, but from my vantage point, most of the reasons practical men decide never to give themselves a chance to start their own side hustle is because much of what we learn about it—at least in The U.S.—comes from television shows, movies, and the media rather than people who actually run businesses.

In my short life so far, I’ve run four different very-small-businesses (I call them micro-businesses) and I can say, without doubt, that the way they came to be do not match any fairytale seen on TV.

They were small. They were incredibly cheap to start. And, to most people besides me, they were boring! No fancy business models, sexy offices downtown, or intriguing business cards—just a product or service that people wanted.

If you’ve ever entertained a dream like this yourself, I argue that most of the objections you have to just getting started may not be actual objections at all. Instead, they may be objections to what you think you have to do start something on your own.

The truth may be quite different.

Time to Confront Your Objections


In my experience so far, many men have three main objections when it comes to starting their own side hustle. Ask yourself if one (or more) of these complaints is what’s holding you back.

If any of those complaints come to mind when you think about starting a side hustle, then you’re in luck right now because we’re going to systematically debunk all three of them.

I don’t have the time to start a side hustle.

Creating a business from nothing is truly a labor of love, and one that takes some commitment. In fact, I don’t know anyone who’s started a business and found that things went far easier or faster than they expected.

If you have a demanding job, a family, a life outside of work, or all of the above, this is a real concern. Where are you going to find the hours and hours it takes to create a meaningful income with all of these commitments?

The truth is that you will have to make some changes to how you use your time, but probably not as drastically as you think.

Here’s the good news: A new business only demands a lot of time if you’re attached to the idea that it must be built quickly.

In the book, Outliers, Malcolm Gladwell talks about the 10,000 hours theory—that almost anyone can master a skill if they dedicate 10,000 hours to it. The same is true for your side hustle. If you put in enough hours—into the right places (we’ll get to this later)—then you can build a successful side hustle, too.

The rate at which you put these hours in is up to you. Yes, if you go slower, then it will take longer. But compared to your other option—doing nothing at all—what’s the hurry?

Here’s the tried and true technique I use to put the necessary time into any new project without overwhelming myself:

Set aside 20 minutes—no more!— every single day to work on your project, and protect those 20 minutes with everything you have. Never let anything get in the way of this time.

This does two things: 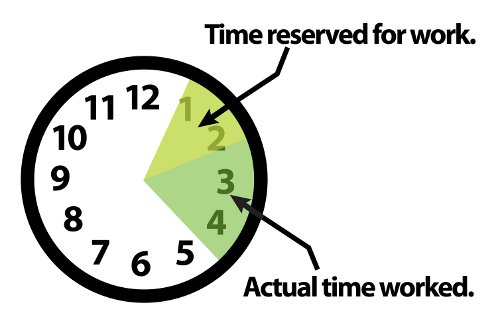 I’m too broke to start a business.

A micro-business, done right, should rarely cost more than $100 to get started. When you’re starting a business, the easiest thing to do is think about all the things you wish you had that would make running it easy and enjoyable—an office, lots of expensive electronics, maybe a few employees or expensive services that automate pieces of your business.

The funny (and sad) thing about all of these business “necessities” is that they are—at least in the beginning—much more effective at destroying a business than making it successful.

Why? Because these are the fun and sexy things about running a business. They’re the status symbols you use to tell others, “Hey, look at me. I have a business!”

They distract from the real important part of running a micro-business: making money. And, just like keeping up with The Joneses will probably get your family in financial trouble, it will jeopardize your little business, too.

We all love to hear stories about the risk-takers with a dream that sold everything they owned, took out massive loans, and started the “next big thing.”

These are the stories that catch our attention. But they account for an extremely small percentage of successful businesses. And the reason we love them is because the odds of success are so incredibly small. That makes them easy to keep in “fantasy mode.”

A micro-business does not need to be run this way. It’s possible to create a meaningful income with far less risk.

At the end of the day, the only things you need to make money in a micro-business are:

That’s it. No fancy bells and whistles. No complicated business techniques, strategies, or elaborate business plans. 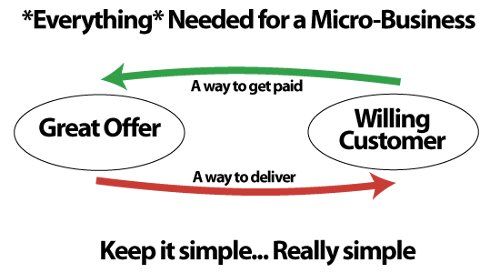 If you want to be a cobbler and sell handmade shoes, all you really need to get started are the raw materials for the first pair, enough tools to make that pair of shoes, and one single customer to buy them. You should be able to procure these things for less than $100.

If you can’t, you’re thinking too far ahead. Even the biggest companies in the world—think Coca Cola—needed very little to get off the ground: a few ingredients, something to put them in, and a place to sell the finished product.

I don’t have a good enough idea to start a business.

If there’s one thing I’ve learned and relearned (several times) in my career starting and building micro-businesses is that the idea—typically seen as the Holy Grail—is far less important than we like to make it out to be.

So far, I’ve been a landscaper with one client, a ticket scalper, a freelance farm hand, an amateur guitar dealer, and now a writer. Two things all of these little businesses have in common are:

A common characteristic I see in many people trying to start their first business is that they give far too much credit to the value of their idea. If it’s not an earth shattering, ultra-unique, never-seen-before business model, then it’s not good enough.

Don’t get me wrong, I used to think this way also. Sometimes I still do, and I need a reminder from someone far more accomplished than me that I’m “thinking wrong.”

Once you’ve started a few business projects, you begin to see that the idea you start with is far less important than what you do with it.

I credit Derek Sivers with explaining this concept much better than I could.

The truth about your business idea is that it’s virtually worthless. If you hold some sort of romantic notion about this, let me crush it right now with a simple challenge:

Take the greatest business idea you’ve ever come up with, and list it for sale on eBay. See how many bids you get for it and just how much cash it brings in. My educated guess is “none.”

This is because an idea is worthless without a multiplier—something to be added to it that exponentially improves its value. In this case, that multiplier is effort, or execution.

Once you bring your idea to life, then it’s worth something. Once you’ve proven that it works, then someone might be willing to pay for it.

The most brilliant idea in the world with terrible execution might fail miserably and make no money at all—it happens all the time. On the other end of the spectrum, someone with a strong work ethic and the will to succeed can take a very average idea and make quite a lot of money with it.

These days, when I hear someone say “I don’t have an excellent business idea,” my immediate response is, “Good! How about an average one?”

To successfully start your own side hustle, you eventually have to stop thinking about the idea and just get to work. An additional benefit is that the faster you do this, the less time you’ll spend convincing yourself you need a whole bunch of extra things to get started.

The First Step to Starting any Side Hustle…

Before work can truly begin on any side hustle, the first thing a man must do is slay his own objections.

This week, spend some time deliberately thinking about all the barriers you’ve created for yourself. Think about the legitimate concerns you have when you tell yourself you want to start your own micro-business.

Then, think about the many creative ways there are to get around them. You now have a work-around for some of the biggest ones. What’s left for you to confront? More importantly, how will you confront them?