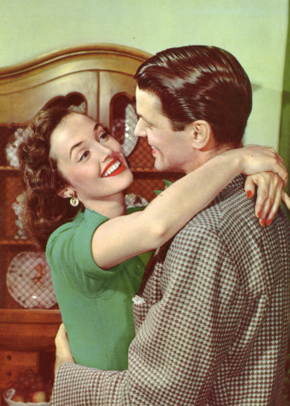 When we wrote 14 Ways to Affair Proof Your Marriage, several people rightly pointed out that the best way to obtain a happy and faithful marriage is to marry the right person. But how do you know when you’ve found the right woman to settle down with?

When it is comes to getting hitched, guys get cold feet for two reasons. Some guys are uber-picky.

The truth is that knowing you’ve found the right woman to marry is not rocket science. The decision to marry my wife was the easiest decision I’ve ever made in my life. Here are five guidelines that guided me on deciding my wife was the one for me:

1. The relationship goes smoothly from the beginning. The best relationships I have seen, including my own, happened completely naturally from start to finish. The couple meets, they get along swimmingly, they start dating, and then they get married. My wife and I never had a single dreaded “DTR” (Define the Relationship) during our courtship. Everything about our relationship felt like the most natural thing in the world. We never broke up and got back together. Or even considered doing so. In contrast, many couples break up and get back together numerous times. They fight and then make up and then fight again. I’m not saying that men in such volatile relationships should not get hitched. But the volatility will inevitably continue into the marriage. Whether that volatility is acceptable is up to each individual man and their sense of the strength of that relationship.

2. She gets along well with your family and friends. Now there may be exceptions to this rule: your girlfriend and one of your friends or family members may simply have clashing personality traits. But in general, it is a red flag if your girlfriend does not mix well with your loved ones. Think about it — your family raised you and made you who you are, and you picked your friends based on your common interests and values. If she doesn’t like them and they don’t like her, then it may mean you are not seeing something important about your girlfriend that they see. When you are in love, it often blurs your vision and judgment. Your loved ones have an outsider’s perspective on the relationship. This doesn’t mean you should break up with a woman just because your friends and family don’t like her. If you are sure of your relationship, be confident in moving forward with it. But it is wise to seek honest feedback from others.

3. There is nothing major you want to change about her. There will always be differences and conflicts in a relationship. But if there is something truly significant about your girlfriend that you wish she would change, then that is a red flag. In the initial stages of a relationship, when your brain is bathed with love chemicals, you may be willing to overlook the flaw or even find it strangely endearing. But after several years, when the love chemicals have ebbed, this flaw may begin to grate on your soul. Remember, people seldom change, and marriage won’t make her change either. If there’s something about your girlfriend that you know deep down you can’t live with, than it’s time to move on. You’re wasting both of your times.

4. She’s your best friend. Physical attraction and chemistry are obviously crucial to any relationship. But at the core of the relationship should be a strong and deeply rooted friendship. Forty years down the line you’re both going to be soft, wrinkly, and saddled with low libidos. What’s going to hold your marriage together when you are old and gray is your friendship. Therefore, if you feel like your girlfriend is your best friend in the world, there is a very good chance that she is the one for you. Do you want to spend all your time with her? Does she make any situation from going to a ballgame to doing your taxes more enjoyable? Do you feel like you could tell her anything and that she knows more about you than anyone in the world? Yes? Well then, she’s a keeper.

5. The thought of marrying her doesn’t scare you in the least. While the image of a man shaking in his boots and having second thoughts the night before his wedding makes for good TV and movie plots, the reality is that when you are marrying the “one,” you won’t be scared at all. Throughout the entire period of dating and being engaged, up until the night before my wedding, I never had a single second thought about my impending nuptials. The only thing I felt was happiness and excited anticipation. Like all of these tips, your mileage on this one may vary. I’m not saying that if you are nervous you shouldn’t get married. But if you go back and forth every week about whether you have made the right decision, you may want to do some serious soul searching.

Check out our podcast on how to avoid falling in love with the wrong person: