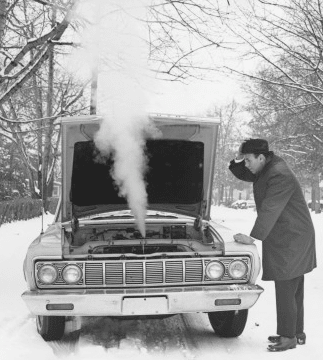 When I was growing up, I noticed that my dad kept the trunk of his car well-stocked with supplies. A lot of the equipment in his car was for his job busting poachers as a game warden, but most of the things he packed in his trunk were for emergency situations.

And there were plenty of times when my dad was able to put his trunk equipment to work.

For example,  about 20 years ago my dad was driving home to Oklahoma from New Mexico in his old burgundy Caprice.  Just outside of Groom, TX,  near the famous leaning water tower along I-40, a hellacious snow storm hit. It was a complete white out, so my dad had to pull over until things settled down.

But things didn’t settle down until a day later.

My dad had to spend the night in his car in the middle of nowhere while a blizzard roared outside. But because he had the forethought to prepare for situations like this, he was able to keep warm with some blankets and avoid ravaging hunger with some MREs

Many of you will be hitting the road this holiday season to visit family, so I consulted my dad, Tom McKay, and asked him what supplies he thinks every man should keep in his car. Here’s his suggested list.

1. Fully charged cell phone. Cell phones have significantly cut down on your chances of being stranded on the side of the road, but don’t count on it as your only line of defense. I’ve been in plenty of rural areas where my cell phone was only worthwhile for playing pong. In addition to you main phone, have a backup one that you can use to call 911. Any old cell phone will do, even if it’s not activated. Cellular carriers are required by law to complete 911 calls from any cell phone. Just throw that old Nokia cell phone from 1999 into your glove compartment and keep it there.

2. Jumper cables. You walk out to your car after a long day of work, stick the key into the ignition, give it a turn, and…. click, click. Crap! You’re going to be late to your kid’s football game! You then look up and notice you left the dome light on all day. It happens to the best of us. Car batteries die, so be ready with a set of jumper cables. And even if you never suffer a dead battery, it’s always good to have a set of jumper cables so you can help a damsel (or dude) in distress who needs their car jumped.

3. Flashlight. Good for providing light at nighttime when 1) putting on a spare tire, 2) jump starting another car, or 3) exchanging insurance information with the clueless driver that rear ended you at a stop light. Get a Maglite and you can also thump would-be car jackers in the head with it.

5. MREs. You never know when you’ll be stranded for long periods of times in your car. If you’ve ever driven out West, you’ll know that it can be hundreds of miles until the closest source of help. Unless you’ve built up a tolerance for extended periods of fasting, keep some MREs or granola/power bars in the back of your car to munch on while you wait for the tow truck to come.

6. Warm blankets. Tom can tell you firsthand why warm blankets are a must. It got pretty dang cold in his Caprice that night. But blankets have uses that go beyond emergency situations. It’s always good to have a blanket in the car for snuggling with your gal while you cheer for your team on a cold fall night or for laying it on the ground for a picnic.

7. Ice scraper. Don’t be the chump that’s out there scrapping their windshield with a credit card at 5AM in the morning. A good ice scraper will set you back just a few bucks, and it will make clearing your windshield much easier and much faster.

8. First aid kit. Whether you’re cleaning up a head wound filled with glass shards or fixing a boo boo on your two year old, it’s good to have a first aid kit. You can always buy one, but putting together your own in an Altoids tin is more fun.

9. Water bottles. For when you’re stranded in Death Valley in the middle of the hottest heat wave on record… or for any other time your car decides to break down on you. Or, for after you’ve left a concert and you’re so dang parched!

10. Tow strap. I don’t know how many times my dad saved my butt with this thing back in high school. Towards the end of my blue ’92 Chevy Cavalier’s (aka, “The Smurf”) life, it would just stop running and no amount of cable jumping would help get it started. For moments like these, my dad busted out the tow strap. You just attach one end of the tow strap to the front of the car that you want to pull  and the other to the hitch on the back of your car. The stranded driver stays in the dead car, puts it in neutral, and steers and brakes while it gets towed to its destination.

11. Folding shovel. There are a couple of instances where a folding shovel might come in handy. The first is when you get stuck in the snow or ice. You can use the shovel to dig some snow out and place some dirt under the tire to get more traction. The second situation is when a car tire gets stuck in a hole or something. You can use the shovel to dig about and create some ramps to help get your car unstuck. Also, it can be used as an improvised weapon, Green Beret-style.

12. LifeHammer. When you’re trying to escape from a sinking car, this little piece of plastic and metal can be the difference between life and death. Use it to break your window, cut your seatbelt and make your escape.

13. Portable air compressor. My dad feels like this was the best purchase he made for the car. When your tire is leaking but hasn’t totally blown out, instead of putting on a spare, you can use a portable air compressor to get back on the road. The compressor fills your tire up enough to allow you to drive to a repair shop to get it fixed. It plugs right into your cigarette lighter. Bonus use: no more paying 75 cents to fill up your tires at stingy gas stations.

There are kits you can buy that have a lot of this stuff in them, but I personally think it’s satisfying to assemble your own cache of supplies. And you can put together a better choice of things.

What do you think a man should carry in his car? Give us your tips in the comments! 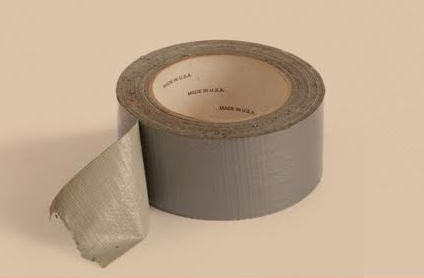