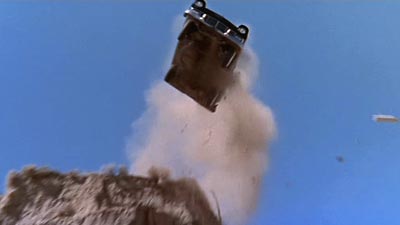 Sometimes when I’m driving, I’ll imagine scenarios that would require me to jump out of my speeding car. I know I can’t be the only one who does this. I do it mainly to pass time while in traffic, but I think there’s also a part of me who wants to be prepared if (in the unlikely instance) I actually have bail out of a moving vehicle to save my life. The scenarios that I usually come up with are 1) my brakes go out and my car is about to fly off a cliff Thelma and Louise style and 2) a criminal organization has put me in the backseat of a car and is transporting me to an abandoned warehouse to beat me with a baseball bat. In both cases, jumping from a speeding car is probably the best option for survival.

Okay, so my scenarios seem unlikely, but when I lived in Tijuana, two of my friends actually did have to jump from a speeding vehicle. True story.

After leaving my apartment one night, these two guys got on a calafia, or bus. Now calafias are pieces of crap. They’re essentially school buses from the 1970s painted different colors to correspond with their route. None of them would pass a vehicle inspection in the U.S. and a lot of the drivers are crackheads.

The area we lived in was super hilly. As the bus was descending one of these steep, long hills, my friends noticed that while the bus driver was repeatedly stepping on the brake pedal, the bus kept going faster and faster. The brakes had gone out on the bus.

My friends had two choices. Stay on the bus and see if they’d survive the impending crash or jump and take their chances with the pavement. They decided to jump. One my buds was a retired Mexican soldier and all around badass. While my American friend was screaming out the window for somebody to help, my Mexican friend took action. He went to the driver to see if there was an emergency brake. There was, but it didn’t work. So he went to the back of the bus and opened up the emergency door.

He told my American friend to hold his backpack in front of him to help soften the landing a bit and then to jump at an angle towards the shoulder of the road where there was dirt instead of pavement. His final instruction was to try to land on the shoulder and roll when they hit the ground. They tried to get the bus driver and the other passenger to join them, but they wouldn’t leave their seats.  The two men looked down at the black pavement moving underneath them at 50 MPH, took a big breath, and jumped.

They hit the ground hard and rolled for several feet. Despite landing on soft earth, their clothing was ripped to shreds. They laid there on the side of the Tijuana road, tattered, but alive. A few seconds later they heard a horrendous crash. The bus couldn’t make the sharp turn and ended up running into the side of a canyon wall. The driver and all the other passengers died.

I went to visit them the next day at their place. They were in surprisingly good condition. They had some wicked road rash and one of them had to get their head stapled shut. But that was pretty much it. No broken bones and no internal bleeding. They rested for several  days and were back to work the following week.

Now, these guys were lucky. Really lucky.  Not too many people can walk away after jumping out of a speeding car without a broken bone. In fact, many people have died from jumping from a moving car. But my friends did some things right that increased their chances of surviving.

How to Jump From a Speeding Car

Note: Jumping from a moving car is a last ditch effort. Serious injury and death can occur from jumping from a moving vehicle. Exhaust all other possibilities before you decide to make the leap. Also, before relying on the information in this article, please read our disclaimer.

Open the door completely. You don’t want the door to shut on you while you’re jumping out.

Try to land in a soft area. If possible, try to jump towards a soft place on the side of the road like grass and dirt. Anything is better than pavement.

Avoid obstructions. Time your jump so you don’t run run into a light pole or sign post.

Tuck. Before you hit the ground, tuck your body into a ball. Bring your chin to your chest and bring your arms and legs close to your body. This will prevent your brain canister from hitting the ground and spilling its contents on the pavement. Also, it prepares your body to roll.

Roll. Hit the ground with your shoulder and roll away from traffic. Rolling lessens the impact when hitting the ground.

Put on your shades and walk away from the exploding car like a badass. Just kidding. That’s what usually happens in the movies. In real life, you need to seek immediate medical attention for the bruises, scrapes, and broken bones you’ll likely have from jumping from a speeding vehicle. 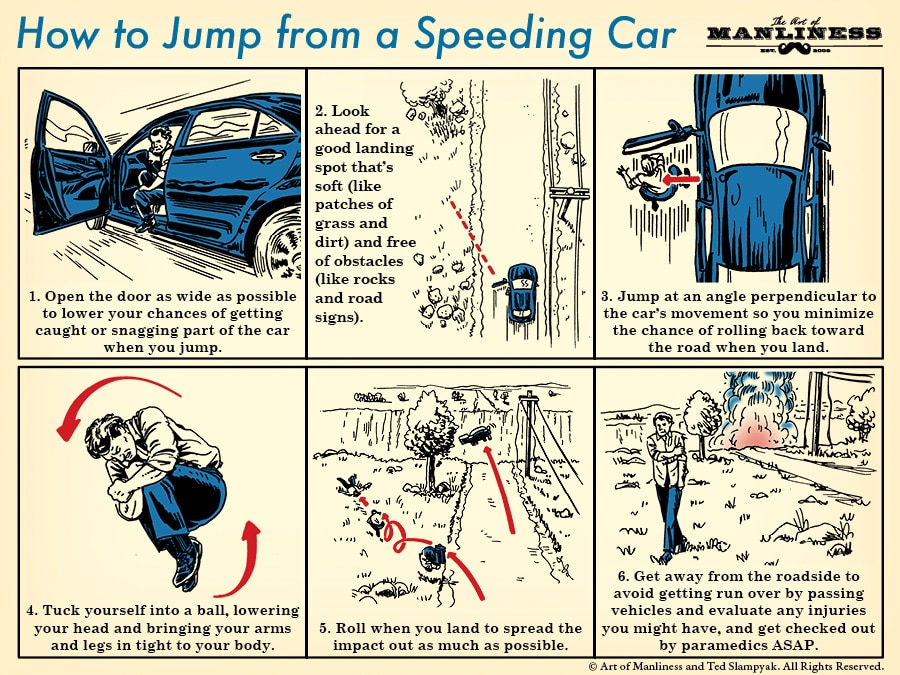 Build a Bug Out Kindle: A Digital Survival Library at Your Fingertips

How NOT to Use a Crescent Wrench