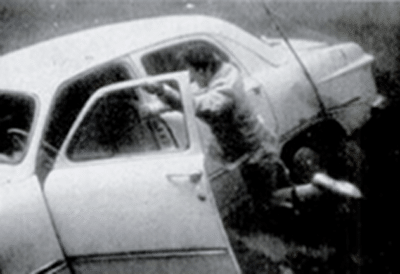 Editor’s note: This post has been revised since its original publication to reflect the best and most current research.

Last week, 3 college softball players in North Dakota drowned when the jeep in which they were riding became submerged in a pond merely 12 feet deep. While their deaths are still being investigated, authorities say that foul play was not a factor;  it was simply an unfortunate and tragic accident. What surprised me after reading the report is how frequently such accidents occur. According to some studies, over 10,000 water immersion auto accidents happen each year. Some people involved in these accidents survive; some do not. If you careened off the road and into a lake, would you know what to do?
While we all feel confident that we’d be able to escape, the reality of being inside a sinking car is far scarier than can be imagined. The car fills up with water much faster than you’d think, you may be upside down, it’s dark, you’re disoriented, and panic quickly takes over. You have to know exactly what to do before splash down. So memorize the following tips.

How to Escape from a Sinking Car 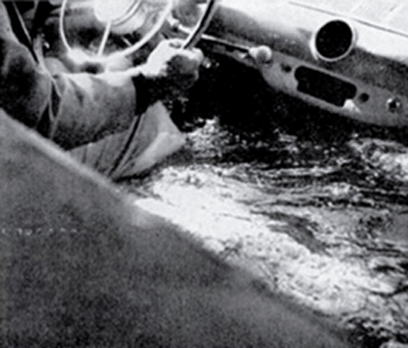 Stay as calm as possible. When you have gallons of water filling your car, it’s hard not to panic. But when the difference between life and death comes down to a matter of minutes, having a clear head is essential to your survival. Panic is often the reason people drown; they lose the ability to think straight and don’t know what to do. The women in the North Dakota accident called their friends on their cellphones! But panic=death. Hyperventilating and wasting your energy on ineffective actions closes off the easiest options of escape, wastes precious oxygen and shortens the amount of time you’ll be able to hold your breath when making an escape. Just concentrate on what you need to do.

Your best chance of escape is the first 30-120 seconds. In research done on the subject, it was found that in the vast majority of situations a vehicle will actually float for 30-120 seconds before sinking. This is your best chance at escape. Stay calm, but also act quickly. If you have your wits about you, 30 seconds is plenty of time to escape, even with passengers.

Do not wait for the pressure to equalize! When your car starts really sinking, the differential between the pressure outside the car and inside the car makes opening the door impossible. So people are commonly told to wait until the car fills completely with water in order for the pressure inside and outside of it to equalize, at which point you will supposedly be able to open the door. But two shows, Mythbusters and Top Gear have tested this theory and found it wanting. The inside/outside pressure will eventually equalize, but it won’t happen just as soon as the car fills up with water. It takes a bit longer, so long that you’ll likely drown before it happens. It is possible if you are patient, calm, and conserve your oxygen, but don’t count on it.

The door is an option, but not your best option. There are still some experts that say your best chance of escape is through the door right as you hit the water. In our research, however, this theory is losing steam. Sure, you have the ability to escape through a door if it’s done immediately, but there are a few serious downfalls. One, if you try and can’t do it, you’ll have exhausted much of your energy. Then you’ll be panicked, which is bad. Two, it requires a tremendous amount of strength to open a door, even in just a foot of water. You may be able to escape that way, but can your wife and kids? Third, if you escape through the door, the car will pretty much immediately sink, rendering it impossible for passengers to escape. If you’re a strong man, you can go this route, but only as a backup plan and if you’re the only passenger in the vehicle.

Roll down or break a window. Simply put, the window is your best chance for escape. If the waterline has not risen past the windows, try rolling down the window first. Contrary to popular belief, Mythbusters found that automatic windows don’t immediately short circuit underwater. But as the car sinks, the pressure of the water will prevent you from rolling them down. This is even the case with manual windows. Even if you’ve got Popeye-sized biceps, you won’t be be able to overcome the pressure and roll down the windows. You’ll probably just break the crank.

So if rolling down the window doesn’t work, you’ll need to break the side window to escape. This is actually harder than you might think as the windows are made of strong, tempered glass.  While the windshield is easier to shatter, they’re designed to be unbreakable and are laminated with a plastic sheet that could keep you trapped in the car. If you’ve been doing your push-ups and pull-ups, you might be able to break the side window with your elbow or fist. Aim for the corner of the window. But this is extremely difficult. The water significantly slows down the force of your movements. The Mythbusters were unable to break it with a kick from a steel-toed boot. Even if you are able to punch it through, your risk cutting up your hands on the broken glass. Remember the scene at the beginning of Karate Kid II when Cobra Kai sensei John Kreese punched through some car windows? Yeah, your hands could look like that. Wrapping your hand in something can help reduce the chance of slicing them up.

Your best option is to have some sort of device in your car at all times that allows you to easily break your windows in case of an emergency. The LifeHammer or the T3 Tactical Triage and Auto Rescue Tool are two tools you might want to consider keeping in your car. The former has a hardened steel tip while the latter has a spring loaded steel tip window punch, which allows you to break strongly tempered windows with the push of a button. They also have cutting devices that will cut through a seat belt if you find that you can’t unbuckle yourself. Keep them in a place that will be immediately accessible in case of an accident; you don’t want to be rummaging through your glove compartment as your car fills with water.

Swim to safety. Push off the car and swim to the surface. If you’re disoriented and don’t know which way is up, look for bubbles and follow the direction they’re going.

What to Do with Passengers

First, don’t open the door to make your escape. While you might be able to get out, the car will quickly fill with water and sink rapidly, possibly trapping your passengers in a watery grave. Instead, roll down or break the window.

Escaping from a sinking car is hard enough by yourself. But what if you have passengers? The first goal is to keep them calm. Take control of the situation by explaining exactly what you’re about to do. When people see there’s a plan, they’ll usually calm down. Make sure they can get out of their seatbelts. If the buckles don’t work, they’ll need a cutting tool. A child can escape from the rear window, but know that they are smaller than front windows. If it’s a small child, pull them up to the front and get them out of your window and follow after.