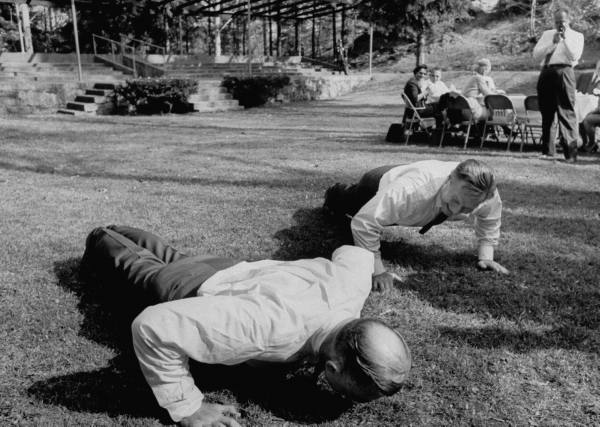 The humble push-up. Used by militaries all over the world to get their soldiers in fighting condition and middle school P.E. teachers to punish punk kids. The push-up is the ultimate bodyweight exercise. It requires no special equipment and can be done anywhere, anytime. The push-up often gets overlooked because many men find it too simple or too boring to perform. But by switching up your hand and feet positions and adding in a few twists, the push-up becomes a versatile muscle builder that will leave you begging for mercy. The Art of Manliness has compiled the ultimate resource on push-ups; here is a primer on every variation (with video) we could find. Your muscles will hate you, but they’ll never get bored.

If you struggle to perform a standard push-up and knee push-ups are too easy, try this one as a segue between the two. Elevating your hands makes the push-up easier. Place your hands on an elevated surface like a park bench or even a counter top. Place feet on the ground. Perform push-up.

It’s the one you’ve been doing since your days in middle school. The standard push-up works your chest and shoulder muscles. Lie down on the floor face down with your feet close together. Place your hands shoulder-width apart. While maintaining a straight body, lower yourself down until your chest touches the ground. Push yourself up. That’s one rep. Once you master this one, it’s time to expand your push-up horizons.

The wide grip push-up puts more emphasis on your chest. Place your hands wider than shoulder width apart and perform a push-up.

The diamond push-up is a triceps killer. Place your hands together so they form a diamond. You can either put your hands underneath your chest or your head to hit different muscles. Once your hands are in place, perform a push-up.

The Hindu push-up has been used by Indian wrestlers and physical culture enthusiasts for centuries. It consists of a dynamic full body movement that will build strength and flexibility in your chest, shoulders, back, hips, and triceps.

Get in position by standing with your feet slightly wider than shoulder width apart. Bend down and place your hands on the floor while keeping your arms and legs straight. You should look like an upside down human “v”  with your butt being the point of the “v” and your head pointing down to the ground.

To perform the Hindu push-up, you’re going to make sort of a swooping motion with your body. Bring your head down and forward by bending your elbows. When your head gets close to the ground, continue moving your torso forward by arching your back and lowering your hips. Your hips will now be near your hands. Make sure to get a good stretch in your back. The first time you perform a Hindu push-up you might find yourself falling on your face during the initial descent. Keep at it though.

Return to the starting position and repeat. The Hindu push-up is difficult to explain in words; you really have to see it to understand it. So make sure to watch the video.

The dive bomber push-up is performed exactly like the Hindu push-up, except when you return to the starting position, you follow the same swooping motion you make on the descent in reverse. It gives those muscles a bit more of a workout than Hindu push-ups.

If you want to focus more on your triceps while doing the Hindu push-up, just place your hands in the diamond position. This one is a killer!

Same as the dive bomber except hands are in the diamond position.

Feet on the Wall Hindu Push-ups

If you’re wanting to get a solid deltoids workout, try this variation of the Hindu push-up. But be warned, this one is super hard. Stand in front of a wall facing away from it. Lower your hands to the floor and bring your feet up the wall. You want to bring your feet high enough up the wall that your legs are perpendicular to the wall and your torso is parallel with it. Perform a Hindu push-up and return to starting position. You can also bring your hands close together for an even tougher exercise.

Same as above, except return to the starting position by following your descent movement in reverse.

The tiger push-up focuses on your triceps. Assume a Hindu/dive bomber push-up position. You should look like an upside down “v.” Place your hands close together in a diamond position. Now, lower your head to the ground by bending your elbows, but keep your butt up in the air. Push yourself back up.

The one handed push-up is a feat of strength that separates the men from the boys. Not only do you need brute arm, shoulder, and chest strength, but you also have to call on several smaller muscles to stabilize yourself as you lift your bodyweight with one arm.

Assume the normal push-up position, but spread your feet wider than shoulder width apart. Place one hand behind your thigh. Lower yourself slowly to the ground and press up. Repeat until you can’t do anymore and then switch to the other hand. The more square and level you keep your body, the more difficult the push-up will be. To make it easier, turn your torso and legs away from the pressing hand.

The Rocky push-up is a one handed push-up except you alternate hands on each rep. This is a must when you’re training to fight Apollo Creed.

If you can’t do a handstand yet, you can still reap the shoulder working benefits of the handstand push-up with the assistance of a wall. Stand near a wall facing away from it. Place your feet against the wall and slowly climb them up the wall until you’re straight up on your hands. Bend your elbows and lower your head towards the ground. Press up.

To perform the plyometric push-up, assume a normal push-up position. Lower yourself to the floor. With explosive force, push off the floor with enough force that your hands leave the floor. Repeat.

The clapping push-up is the same thing as a plyometric push-up. The only difference is that when you explode off the ground, you clap your hands while you’re in the air. In addition to the benefits of the plyometric movement, I’ve found that adding a clap in the middle can help increase hand speed. And it just makes you feel cool.

The triple clap push-up requires super agility and hand speed. Perform a plyometric push-up. As your body is coming up, clap once, when your body reaches its peak, clap behind your back, and before your hands hit the ground, clap one more time.

This is the ultimate push-up. Only the most athletic and strong will be able to perform this monster. The planche is a gymnastic movement used during floor routines. It’s also done by break dancers. Simply put, this is a push-up without the feet touching the ground and just balancing on your hands.

This push-up variation works your core. Assume the standard push-up position. Lower yourself to the ground and push up. As you come up, rotate your body so that your right hand comes off the floor and your right arm extends overhead. You should look like a giant “T” tilted on its side. Return to the starting position, lower yourself, push up, and rotate until your left hand points up.

The Superman push-up will work your abs more than doing 100 crunches. It’s also an amazing back exercise. Lie on the floor face down. Instead of placing your hands by your chest, place them further out in front of you head. Lift up. I thought this would be a cinch, but the first time I did it, I was struggling to do even one.

Assume the standard push-up position. As you lower your body to the floor, step your right leg through the space between your left hand and foot, and cross it all the way over to the left side, resting on the outer edge of your foot. As you lift your body back up, step your right foot back so you’re in the standard push-up position again. Repeat with your left foot. This counts as one rep.

These are insane. Do not attempt unless you are supremely fit. Start off in a standard push-up position. Lower yourself to the ground. Explode your entire body off the ground and perform a jack knife by touching your fingers to your toes in mid air. Return to starting position. Repeat if you haven’t killed yourself.

If you want to work on your forearm strength for your golf or tennis game, look no further than the fingertips push-up. This is definitely advanced, so proceed with caution. Instead of resting on your hands, rest your weight on your fingertips.

The Jack Lalanne fingertip push-up is essentially the Superman push-up on your fingertips. What’s amazing is that even though Jack Lalanne is almost 100, he can still bust this bad boy out. If that doesn’t inspire you to drop to the floor and start cranking push-ups out like a mad man, I don’t know what will.

Bruce Lee was an amazing physical specimen. Despite being a small guy, he had the strength of 100 men. His Herculean strength is evidenced by his ability to do multiple push-ups with only two fingers of one hand. That’s just crazy.

And who are we kidding? 98.7% of all men will probably never be able to do a one-handed, two-fingertip push-up. It’s just cool to know that it’s humanly possible.

Are you tired of being the 95-pound weakling who gets sand kicked in their face? Then crank out some Charles Atlas push-ups. To perform this push-up, you’ll need three chairs. Place one chair where your feet go and the other two chairs where your hands go. Assume the push-up position on these chairs. Lower yourself to the floor. Because you’re elevated off the floor by the chairs, you can go down further and get a deep stretch in your chest and shoulders. It also makes the going back up more difficult.

The one-legged push-up exercises your core and glutes in addition to your arms.

Assume a standard push-up position. Lower yourself to the ground,  and hold the position there instead of pushing yourself back up. Hold for 10 seconds, or longer if you want. Flex and unflex your muscles while you’re holding it for an even deeper burn. Push back up and repeat.

Knuckle push-ups are often used by martial artists to toughen their knuckles and strengthen their wrists and forearms in order to deliver more punishing blows.

To perform a a knuckle push-up, simply perform standard push-ups while resting on your knuckles instead of your hands.

Side-to-side push-ups allow you to focus on one side of your body. They’re a great push-up to do to segue into one armed push-ups.

Assume a standard push-up position. When you lower yourself to the ground, lean to your left. When you push back up, it should feel like your left arm is doing most of the work and your right arm is there only for stabilization. Return to the starting position. Lower yourself again, but this time lean right. 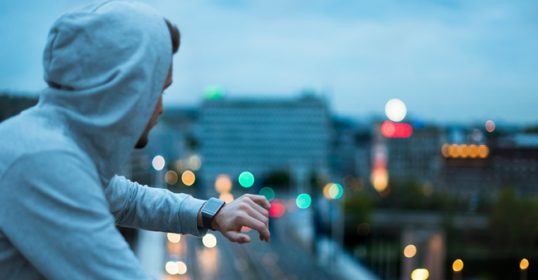