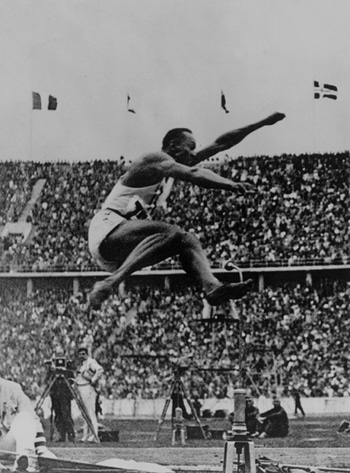 I’m always looking for ways to mix up my workouts in order to avoid the monotony of lifting weights and spinning my wheels on the elliptical machine. In my quest to diversify my fitness routine, I often turn to my high school football days for inspiration.

One of the routines my teammates and I underwent during summer conditioning was a series of exercises first developed by Soviet countries during the Cold War. Called plyometrics, these exercises were designed to increase speed, power, and explosiveness. After every plyometric workout I felt like battery acid was pumping through my veins. But the exercises worked. My teammates and I developed the speed and power we needed to explode off the line of scrimmage and dominate the other team.

While I no longer snap footballs, I figure I can still benefit from plyometric exercises and have started doing them once again. If you’re like me and looking for something to add to your fitness routine, today I provide a short primer on plyometrics and a simple routine to help get you started.

A Brief History of Plyometrics

Plyometrics were developed by Soviet Bloc scientists during the Cold War. The leading researcher of plyometric training was a Russian scientist named Yuri Verkhoshansky. Dr. Verkhoshansky developed a system of exercises called “Jump Training” that used repetitive jumping in order to increase the speed and explosiveness of Russian track and field athletes. He published the results of his studies on this new form of training in 1964.

During the 1960s and 70s, Soviet Bloc countries dominated the Olympics thanks in part to Dr. Verkhoshansky’s exercises. Seeing that the Americans were getting their asses handed to them by the Commies, American track and field coach Fred Wilt started to investigate how they were training. He saw that the Soviets were doing a bunch of crazy jumps from boxes and skipping around like school children. Wilt took some notes, went back to America, slapped the moniker “plyometrics” on these new exercises, and started implementing them with his athletes.

Since then, sports teams across the U.S. and the world have incorporated plyometrics into their training regimens to help their athletes become faster and more explosive.

The Benefits of Plyometrics

Plyometrics improve the functions of muscles, tendons, and nerves so that you can run faster, jump higher, and hit harder. In short, plyometric exercises can help you improve your pick-up basketball game or prepare your body for when you have to save your own life.

Benefits to tendons. In order to increase the power and speed of muscular movements, you need to increase the strength of your tendons. Moreover, stronger tendons mean fewer injuries. Many men I know have had to undergo surgery because they tore a tendon while playing soccer or basketball. They might have been able to avoid these injuries had they only worked on increasing strength and elasticity in their tendons. Plyometrics strengthen your tendons and boost their elasticity by placing stress on them in a controlled setting.

Benefits to nervous system. A final component in increasing power and speed is your nervous system. Every time you contract your muscles, a signal is sent from your brain to your muscles via your neuromuscular system. The more efficiently your neuromuscular system can transmit this signal, the faster you can contract and relax your muscles, which in turn increases your athletic speed and power. Plyometrics boosts this efficiency.

There are dozens of different types of plyometric exercises. In fact, you can find books filled with hundreds of pages of them. I couldn’t possibly include them all here in one post, so I’ve narrowed the list down to the ones a beginner could easily try. But before we get to the exercises, let’s discuss some general guidelines to keep in mind as you get started.

Safety First. Plyometrics are by their nature intense. You’ll be putting a lot of load on your joints and tendons. If you haven’t worked out in awhile, I recommend holding off on adding plyometric exercises to your routine until you’ve built up your strength and flexibility with regular cardio, weight training, and stretching.

When you first start off, take it slow and focus on performing the exercises in a controlled manner. You should always warm up with some light jogging and stretching before you begin. Allow adequate resting time between plyometric workouts. I usually only do two plyo days a week: one on Tuesday and another on Saturday.

Sets, reps, and rest. Perform all of the exercises listed below. With each exercise, I like to perform 3 sets of 12 reps with 1 minute rest in-between sets. In-between exercises I rest for 3 minutes.

Squat Jumps. Stand with your feet shoulder width apart. Squat down and jump as high as possible. Upon landing, squat and immediately jump up again.

Lateral Jumps. Stand next to a cone or another object that you can jump over. Jump sideways to the opposite side of the cone. Upon landing, immediately jump to the other side. Remember to make the jumps as quickly as possible.

Power Skipping. Remember skipping as a kid? Well, you’re going to do it again, but this time you’ll put a bit more oomph into it. Perform a regular skip, but jump and lift your knee as high as you can. Just like this guy:

Tuck Jumps. Stand with your feet shoulder width apart. Explode and jump as high as you can. As you rise, pull your knees into your chest. On the way down, straighten your legs and land softly on the balls of your feet. As soon as your feet touch the ground, perform another tuck jump.

Alternate Leg Bounding. Bounding is sort of like running, except your steps are longer and higher. Drive off your right foot and bring your left knee up. Try to stay in the air as long as possible. Land on your left foot and repeat with the right foot.

Box Jumps. Stand in front of a box or other suitable platform (like a park bench). Try to find a box that’s at least 18″ off the ground. As you get stronger, increase the height. Jump onto the box and immediately back down to the same position. Immediately repeat. Perform the jumps as quickly as possible.

Vertical Depth Jump. Start off by standing on top of a box or other platform. Hop off the box and land on both your feet. As soon as your feet hit the ground, jump as high as you can. Get back on the box and repeat.

Plyometric Push-up. Assume a normal push-up position. Lower yourself to the floor. With explosive force, push off the floor with enough force that your hands leave the floor. Repeat.