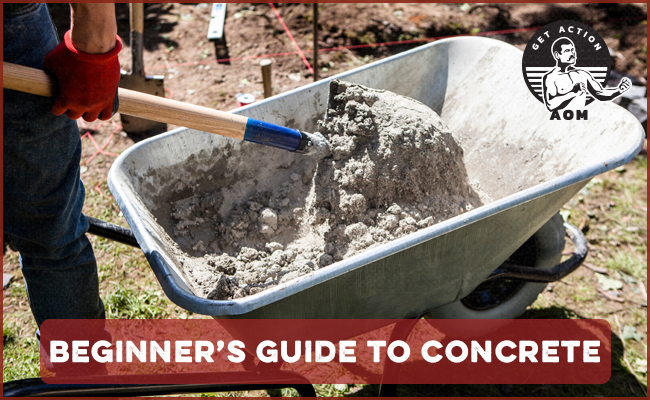 Concrete is the most widely used building material on earth. Humans have been using it for thousands of years and have built impressive structures with it that have stood the test of time. If you’re a homeowner, you’ll likely use concrete for some simple DIY jobs: setting a fence post or a basketball hoop, or laying a concrete slab for a patio.

Despite the ubiquity of concrete, there’s a good chance you don’t know that much about it. Let’s remedy that today by going over a few basics about this building material.

What Is Concrete Made Of?

Concrete is a composite material made of three main ingredients: cement, aggregate, and water.

Cement. People often use the words “concrete” and “cement” interchangeably, but they’re not the same thing. Cement is a component of concrete. It binds together the aggregate (more on that in a bit) and, when combined with water, gives concrete its solid and durable properties.

Most modern cement is Portland cement. To make Portland cement, cement manufacturers combine limestone with a silica source (like slag, fly ash, or clay) in a giant kiln. They then heat up the mixture to temperatures as high as 3,000 degrees Fahrenheit. This drives all the water out of the mix as well as the carbon dioxide from the limestone. The heat chemically mixes all the ingredients together to form a new compound called clinker. The clinker is then ground to a very fine powder and mixed with gypsum.

The ready-mix bags of concrete that you buy at Home Depot already have cement and aggregate combined. You just need to add . . .

Water. Water is the third and final ingredient of concrete. When you add water to your cement and aggregate mix, a chemical reaction occurs between the components called “hydration” or “curing.”

The hydration process results in calcium silica hydrate (CSH). CSH hardens and interlocks to give concrete its solid and durable nature. In short, water is what makes concrete hard.

Understanding that water is what kickstarts a chemical reaction in cement to give concrete its hardness should clear up a popular (yet erroneous) belief that concrete hardens by drying out. In fact, if your newly laid concrete slab dries out too fast, you’ll end up with a weakened concrete slab. This is why, as we’ll see below, properly laying concrete requires that you keep it moist for the first few days, as this is when most of the curing takes place.

Mixing concrete isn’t difficult. For most DIY projects around the home, you can simply use bags of the just-add-water concrete mix you can buy at Home Depot or Lowes.

It’s easiest to mix concrete in a wheelbarrow. The wheelbarrow’s ample tub makes mixing large amounts of concrete and moving your concrete mix to where you need it much easier. But you can also use a bucket or some other tub if that’s all you have.

First dump the dry concrete mix into your wheelbarrow or tub and push it all the way to one side.

Now comes the tricky part: Knowing how much water to put in: Too little and you won’t get the hydration process going; too much, and you’ll get a soupy mix that will result in weakened concrete.

Your ready-mix bag should tell you how much water you need to add, but you also need to apply your own eyeballs and judgement to this general recommendation. Fill a bucket with the recommended amount of water and slowly pour some of it into your dry concrete mix in the wheelbarrow. Don’t add all of the water right away. After you’ve poured some water in, mix it with the concrete mix using a hoe. Pour some more water in. Mix with the hoe. Pour some more water. Mix. Repeat the process until you’ve got a mix that’s neither too dry nor too wet.

Typically, concrete starts curing a few hours after mixing, so you should use your newly-created concrete within that time frame. For larger projects, you’ll want to look into renting a concrete mixer. This will not only make mixing large amounts of concrete easier, but the constant rotation of the mixer will keep the concrete in its liquid form and prevent curing from starting.

Be sure to clean up your wheelbarrow and tools as soon as you’re done with your job. You don’t want the concrete to cure and stick to them. The easiest way to get the job done is to rinse the concrete off with water and scrub with a stiff brush. As long as you’ve diluted the remaining concrete residue with plenty of water, it’s okay to pour it out in an inconspicuous place in your yard. Some people also just dig a hole, pour the residue in there, and then cover with dirt. Concrete is mostly limestone, so you’re just adding limestone to the ground. Won’t hurt anything as long as it’s not large quantities and it’s thoroughly diluted.

Concrete does most of its curing in the first few days. As mentioned above, water is a necessary component of that curing process. That’s why it’s a good idea to keep your newly-poured concrete damp for a few days after you’ve poured it. Simply mist it with a hose. That’s it.

Because concrete requires water to cure and harden, you’ll need to consider the weather when working with concrete. If it’s too hot outside, the water in the freshly-made concrete can evaporate too quickly for the hydration process to occur. If it’s too cold, the water can freeze, disrupting the curing process.

Ideally, work with your concrete when the temperature is between 40 degrees and 90 degrees Fahrenheit. You’re less likely to have issues within that range.

With that said, you can still work with concrete above and below that range; you’ll just need to take extra precautions. If it’s really hot outside, be especially vigilant about keeping your concrete damp.

If it’s freezing outside, you can add a chemical accelerant to your concrete so that the curing process speeds up. You can also keep heaters near your concrete or put tarps over your newly poured concrete to keep it warm.

The above is a basic intro on how concrete works and how to mix it. You’ll be able to set a post or basketball hoop or even make some concrete weights with the above instructions.

If you’re looking to pour a concrete slab or make concrete stairs, you’ll want to check out all the fantastic video tutorials that exist on YouTube.

At the least, you now know not to call concrete cement.