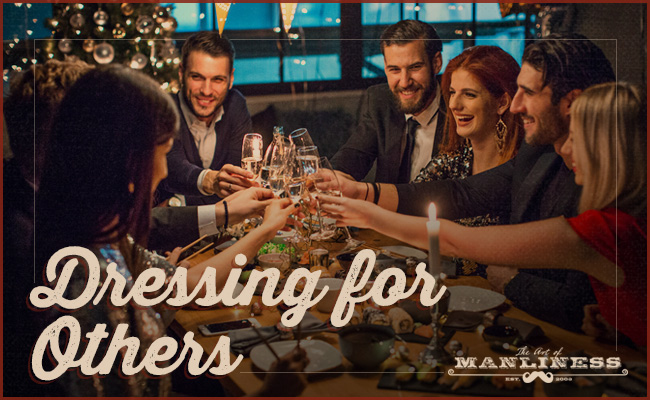 “Eat to please thyself, but dress to please others.” —Benjamin Franklin

“think of your appearance as a gift to others.” —Russell Smith, Men’s Style: A Thinking Man’s Guide to Dress

There are many ways that dressing well will benefit you personally. When you look sharp, you feel better about yourself, make a great first impression, and interact with others more confidently, all of which helps you build relationships and become a more influential man. Research shows that when people perceive you as more attractive, they assume other positive qualities about you as well (the so-called “halo effect”), and even find you more persuasive. One’s style is also simply a chance to express one’s personality and taste.

While dressing well can thus be self-serving (and there’s nothing wrong with that), there are also more altruistic reasons to care about one’s appearance. Dressing for other people can in fact be just as, or an even more compelling, reason to do so.

The idea of dressing for others is not likely to strike the modern mind very agreeably. As we pride ourselves on believing we are individualists, who don’t care what anyone else thinks, the idea of choosing clothes with reference to other people may smack of conformity.

But when I speak of “dressing for others,” I do not have in mind acquiescence to societal codes (which hardly still exist), where the end is merely fitting in.

Rather, I am forwarding an idea of dressing well as a freely chosen service — a gift one willingly gives to others.

The Way How You Dress Enhances Life for Everyone

When it is popularly asserted that “men don’t care about how they look,” it is invariably implied that this is an ancient, even eternal principle — that men have ever disdained a concern for personal appearance.

Of course, even the most cursory glance at history easily contradicts this claim. One need only look at the debonair suits worn by men seventy-five years ago, or the wigs, tight breeches, and lacy collars worn by men several centuries ago, or the ornamental headdresses and decorative buckskin clothing worn by native tribesmen several millennia ago, to see this is clearly not the case.

In fact, if you look at tribes of isolated, indigenous people who still exist today, peoples who’ve had little contact with civilization and the social mores and consumerism that go with it, you still find men who evince a concern for their appearance. Take the Yanomamö, for example. In the 1960s when anthropologist Napoleon Chagnon studied the tribe, they had been virtually uncontacted by outsiders, and continued to live a violent, honor-driven, “primitive” lifestyle, including in how they dressed, or didn’t dress; men typically wore only a string around their waist, to hold up their penises. Yet, though the tribesmen didn’t have many materials to work with, there were still times when they took pains to care for their appearance, as Chagnon reports in detailing a hike they took to visit a neighboring settlement:

“Eventually one of them turned around and whispered to me that we were getting close to the village. My companions stopped talking and began walking slowly as if they were stalking some game animal—silently, attentively, and cautiously. They stopped and quickly tended to their coiffure and decorations. They combed their pudding-bowl bangs with their fingers, donned their monkey-tail headbands, washed their legs and arms in the stream, and quickly applied the red nara paint and a few brilliant feathers they carried in the bamboo arrow point quivers (toras) that dangled down their back. Then they urged me, with whispers and gesticulations, to “clean myself up”—wash the mud off my legs and put on a red loincloth to make myself presentable as a visitor. I obliged, somewhat dumbfounded at this hasty but ceremonial preparation for a short visit to a group of people they already knew quite well and had seen very recently, and who were their close relatives.”

What accounted for the tribesmen’s concern for their dress and grooming?

“The Yanomamö love drama, ceremony, and the attention they command on just a mere visit to a village.”

Even though we live in a very different culture, this need for attention, and for drama and ceremony, remains with us just as acutely. Though we do our best to thwart and ignore it!

While well-to-do men of the past had many different dress codes for every conceivable time and occasion, and thus would change their outfits multiple times a day, in the modern age we tend to wear the same kind of clothes for most everything — sometimes not even needing to dress up for work — and to let it all hang out. While this approach is certainly comfortable and convenient, and few are aching to return to a time when you wore something different to breakfast, lunch, and dinner, this uniformity in dress contributes to our lives running together into an indistinct blur. It contributes to the horror of the Same Old Thing. Supposedly special events don’t feel so special, and in the absence of any true deviations from our ordinary routine, our lives feel devoid of texture.

How you dress contributes to the ambiance, to the weight of an event — to how significant the occasion feels. Just as a dinner with paper plates and cups feels different than one with fine china and crystal, an event where everyone is dressed in something other than their everyday duds feels different than one where everyone’s in their daily uniform of t-shirts and jeans. Not only does your manner of dress add to the overall “ethos” of an occasion, it enhances the aesthetics of its “backdrop.” As Russell Smith observes in Men’s Style, “Physically attractive people are pleasant to be around, just as beautiful buildings are pleasant to live in, and warm rooms are preferable to cold.”

Yet we’ve lost this idea that the creation of atmosphere is a cooperative endeavor; trained to be passive consumers, we expect to show up and have the atmosphere served to us, as if we existed completely apart from it, and have no role in its manifestation.

But ambiance is like orchestral music; when each of the players harmonize their sound, something magical is created; when someone is playing out of tune, the discordant notes throw the whole thing off.

This is to say, that when everyone is dressed nicely at a fancy restaurant, party, dinner, play, wedding, funeral, etc., this elevates the occasion for everyone — makes it feel more like a time out of time, an experience that’s more significant, set apart, and memorable. When you show up dressed well for something, it contributes to everyone feeling like they’ve momentarily escaped their everyday lives. Conversely, people who don’t dress special, for a supposedly special event, degrade the illusion, pop the bubble.

Ultimately, how you dress can enhance or detract from special occasions: it’s a way to show respect for the hosts or the people being celebrated — to show you recognize the event’s overall importance — as well as to your fellow guests. In doing so, of course, you benefit from the heightened sense of “drama” too.

Giving the Gift of Style

When it comes to dressing, I’m not a real style guru and you’ll usually find me in a t-shirt and jeans. I like to express some personality with my clothes, sure, but don’t feel a strong drive to do so. I would dress well to enhance my confidence and influence when having an important meeting, but as I am self-employed and work from home, these are few and far between. So when I do “dress up,” it’s largely in the service of other people. That doesn’t mean I get guzzied to add an element of beauty to a trip to Wal-Mart, but, that on more special occasions I like to do my part in actually making them feel special. I find it motivating to think of my dress in that more altruistic vein; perhaps you will too.