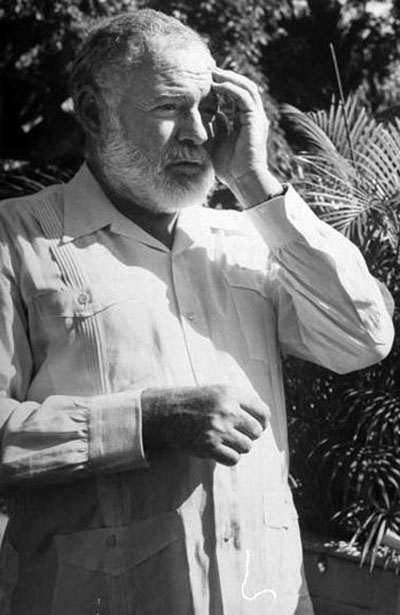 About three hundred years ago a farmer’s wife took a needle and thread to her husband’s work shirt. She sewed four large pockets onto the front of the shirt, enabling her husband to easily pick and carry guayabas (guavas).

Past this — well, that’s where the arguments start.

The Cubans claim it originated near the Yayabo river in Sancti Spiritus, Cuba.  The Mexicans believe the Yucatans invented the shirt and the Cubans copied it.  Then there are other stories of it originating in Thailand or the Republic of the Philippines, and then making its way to Central America via Chinese slave traders.

I will only say this: The guayabera is a functional and stylish hot weather garment that should be in more men’s wardrobes.

The purpose of this article is to introduce you to this classic men’s shirt — and hopefully help you see it’s something you can wear on those sweltering hot summer days.

What Is a Guayabera?

The guayabera is a traditional Latin American garment.  Most of the guayaberas in the United States originate from factories in and around Miami, Florida, which are often owned by Cuban-Americans.

The basic features that define a guayabera are: 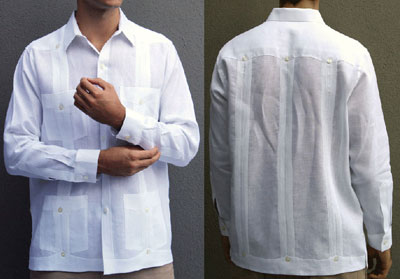 Different artisans over the years have taken the liberty to create variations of the garment, such as adjustable buttoning slits at the sides of the shirt, french cuffs, short sleeves, and even no pockets.  For the purposes of this article, I will include them all.

As for color, white and light pastel colors are the most common and traditional, but like any shirt, guayaberas now come in both traditional and brighter colors as young men have asked for more variety.

100% cotton or 100% linen are used to make the highest quality guayaberas. Light weaves are prized in hot, humid climates. A thriving tourist market has led to production of lower-cost, part-synthetic guayaberas that are sold as affordable souvenirs; depending on the weave, they are fine for most men, but if you can, try to find one made from natural material. 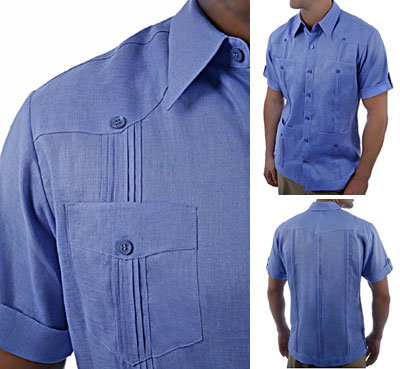 In the United States, the guayabera is mostly used for a casual shirt, worn without a jacket. The long, even hem is meant to hang over the trouser waist and belt.

There are no real rules on what you can and can’t wear with a guayabera. Jeans or other tough work pants are a nod to its working-class origins. Cotton slacks are typical dress-casual antecedents. Shorts look a little touristy, but it is a popular tourist shirt. You can do that look if you’re comfortable with it.

The kind of guayabera you buy will affect which pants and other garments it goes well with. You can loosely break guayaberas down into three broad categories: 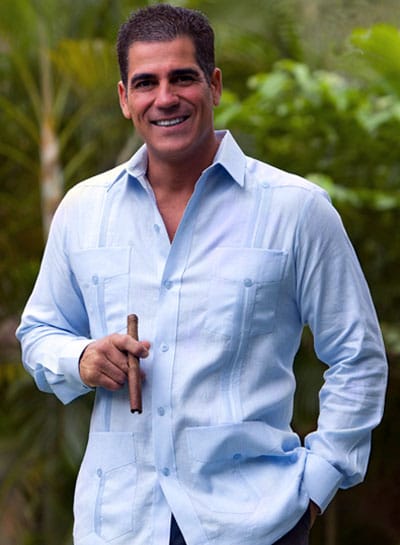 Working guayaberas complement jeans or cotton slacks. Festive guayaberas do as well, but can also be paired with more colorful pants or with dress slacks made from tropical weight wool or linen. Tourist guayaberas can go with anything you wear on vacation — they’re going to look loud and silly no matter what, so go ahead and wear them with shorts.  Need help with how to wear shorts? Here’s an older AoM article on the subject.

The overall theme here is versatility: men have been wearing guayabera-style shirts for centuries. At one point or another they’ve been paired with everything. Be assertive and wear yours with whatever looks good.  Here’s a great example of guayaberas being worn in a more fashion-forward way.

And age?  Doesn’t matter if you’re seven, seventeen, or seventy.  They look great and are incredibly comfortable.   In fact in this interview, master guayabera-maker Rafael Contreras discusses why more US men should embrace this simple and masculine garment. 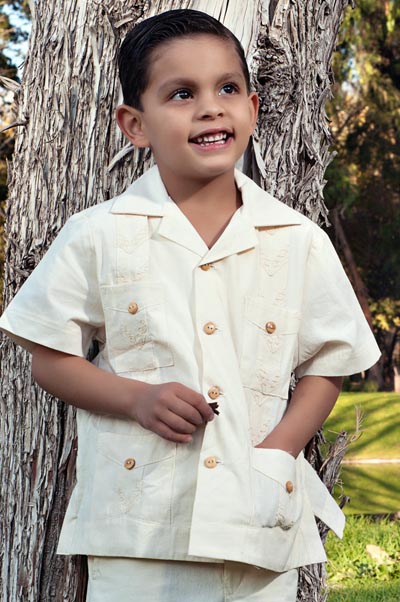 The Guayabera as Business and Formal Wear

It’s not widely known in the United States (at least outside of Florida), but several Latin American and Caribbean island nations have adopted the guayabera, formally or informally, as a form of national business wear.

Mexico, the Dominican Republic, Puerto Rico, and Cuba (where it is the official dress garment as of 2010)  all recognize the guayabera as a form of “national dress.” Their political leaders often wear them at public events.  Just type in Summit of the Americas and you’ll see dozens of Latin American leaders wearing guayaberas alongside counterparts wearing full suits and ties. 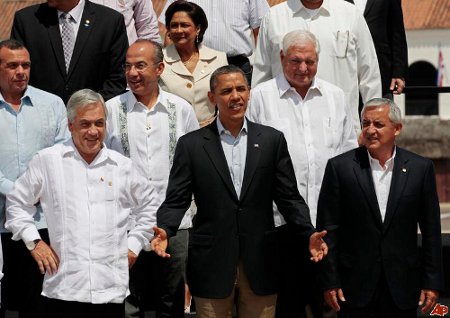 Obama: “I’m hot in this jacket! Where can I get a guayabera?”

Outside of beach weddings, it’s unlikely that most North Americans will need to wear the guayabera in a formal or business setting.  However, if you’re interested in doing so, the standard formal style is:

Like all things pertaining to style, there will be the occasional exception, but leave them to men who wear guayaberas regularly and need a little variety in their lives. Most of us will look better sticking to the conservative white long-sleeved style in business settings where we would normally wear a suit. 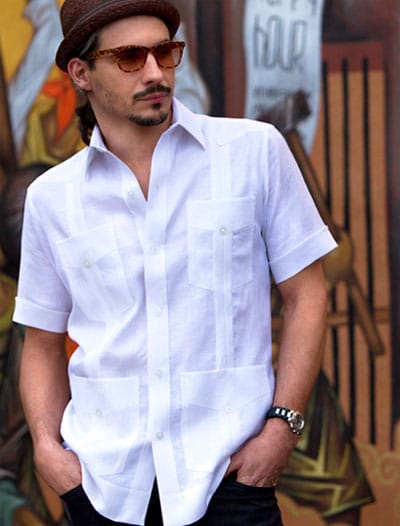 So what makes a high-quality guayabera?

More than anything, the material. Guayaberas are hot-weather clothing. (You can’t really get away with wearing them outside of summer in places like the United States or Western Europe.)

For comfort’s sake, that means either 100% cotton or 100% linen, or something very much like it. A small percentage of synthetic fiber can help with mildew resistance, but anything more than 5% or so of the blend is a cost-saving measure rather than a sign of good construction. Synthetics don’t breathe well and become sticky quickly in humid weather, so stick to natural fibers.

A few South Asian countries make guayabera-style shirts from plant fibers like bamboo, ramie, or hemp. While sometimes heavier than cotton, they do typically hold up well in humid weather, and are very resistant to mildew and the bad-smelling bacteria that colonize human sweat. 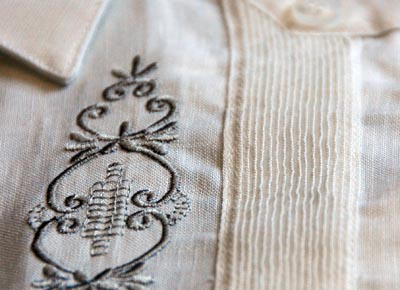 Other considerations beyond the material to look for include:

The latter point is important in keeping the guayabera from flapping like a sail in the wind. You want it to hang off the body for comfort, but not very far. Slim men will need more of a taper than stocky men, and can look quite absurd without it.

Travelers to Miami, Cuba, or Mexico’s Yucatan Peninsula can have a guayabera custom-made if they have a few days to spare. Exchange rates favor United States or European travelers heavily, so it’s possible to get high-quality, custom-fitted clothing for pennies on the dollar. Non-Spanish (or Portuguese in the case of Brazil) speakers can expect to pay the usual “tourist tax” mark-up from most merchants, but you still tend to end up paying less than you would buying off-the-rack in the United States or online.

For men who don’t regularly travel to Latin America or South Asia, there are a few tailors selling custom guayaberas online. Expect to pay much the same prices that you would for a custom-made dress shirt, and for the same reasons.

It’s best to start with a plain white or off-white guayabera and build your collection from there. The hotter your climate, the more reasons you’ll find to wear them, but even men in temperate climes will find use for the guayabera’s versatile style.

Watch this video to have me talk you through the post:

I would like to thank Rafael Contreras, owner of D’Accord American Made Guayaberas for consulting with me on this article.