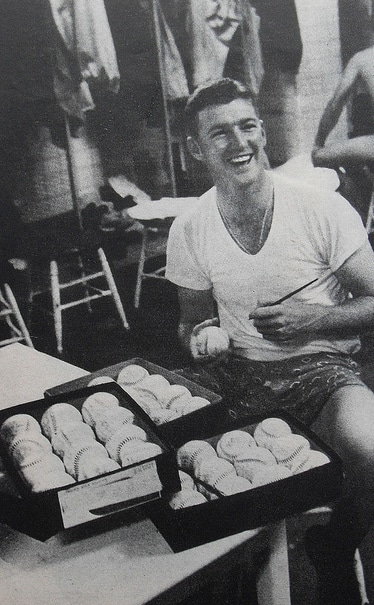 Well, it’s summer now, and pretty soon we’re going to start seeing guys’ undershirts whether we want to or not. When it heats up outside, you see outer layers come off and occasionally even see someone wearing a white t-shirt or tank top out and about around town. Just last weekend I was at a bonfire as part of a wedding festivity and came across at least one fella rockin’ just his undershirt.

So, you’re all surely wondering, where’s the line between an “undershirt” and a “shirt you sometimes wear under other shirts,” and what are the options?

Fear not. We’ve crammed all the essentials about undershirts into one short post for you.

So grab a cold beverage and prepare to learn everything you’ll ever need to know about a man’s undershirt.

History and Origins: Whence the Undershirt?

It’s impossible to give original credit for the undershirt.

Somewhere back in our early human history, someone presumably decided to stick a thin layer under the rest of their clothing to soak up sweat. That was an undershirt.

Roman soldiers certainly wore them, in the form of very light, thin tunics layered under heavier cloth and armor.

But if we want to talk about the modern undershirt, we’re looking at the evolution of the “union suit.” You’ve probably seen those one-piece undergarments in cartoons and old movies — they’re the lightweight “long johns” with the butt flaps in the back that make for such great toilet jokes. 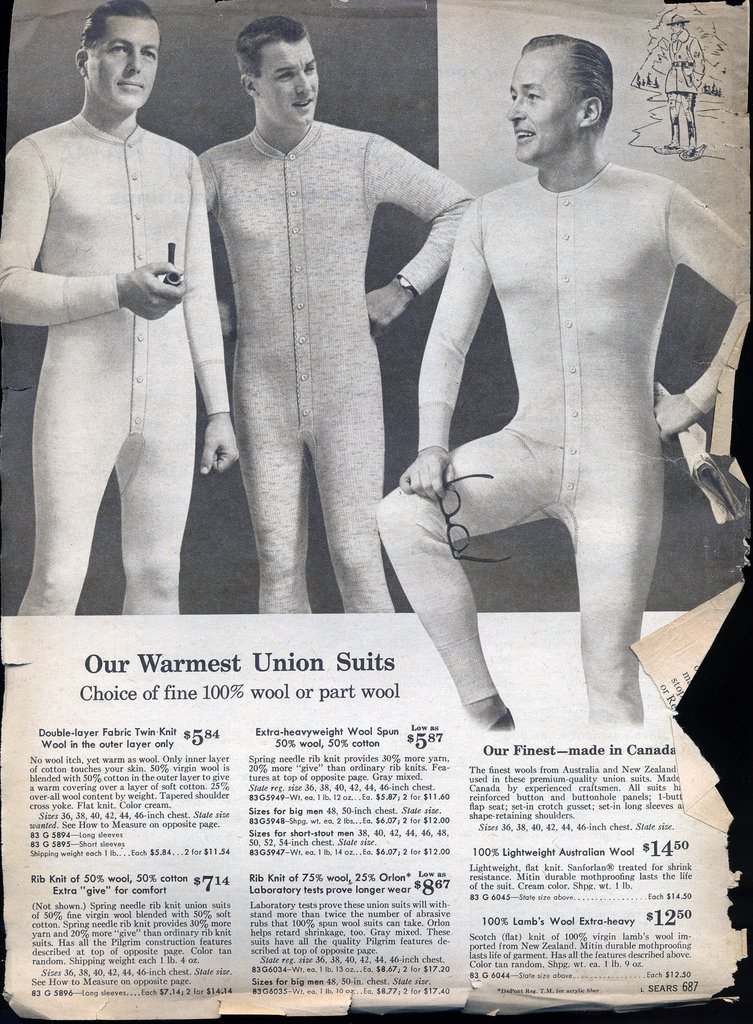 Union suits emerged in the late 19th century as part of a widespread “clothing reform” movement, which attempted to apply modern manufacturing and scientific knowledge to the fashionable garments of the time in an effort to make them cheaper and more comfortable. Most clothing reform happened in the realm of women’s fashion, but it was the first time that manufacturers and advertisers really began pushing the benefits of an under-layer for men as well.

A lot of those late-19th and early-20th century arguments were actually right on the mark. We still wear undershirts for about the same reasons that Victorian men took to wearing their long johns: they save wear-and-tear on the layers above them, and can be used long after a visible garment would be considered too stained or worn for public display. 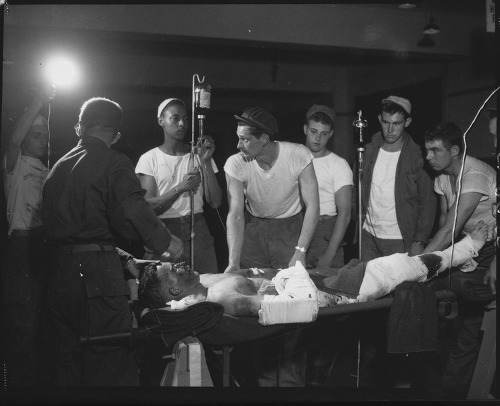 In WWII and the Korean War, military men started wearing the undershirts they had been issued to don under their uniforms as outerwear.

By the early 20th century, the U.S. Navy was issuing T-shirts as undershirts to its crews to wear under their uniforms, and many dockworkers and stevedores adopted them in place of long johns as well. To beat the heat in tropical climates and aboard submarines, and to avoid soiling their uniform while doing dirty jobs, Sailors and Marines took to wearing just their undershirts when they could. 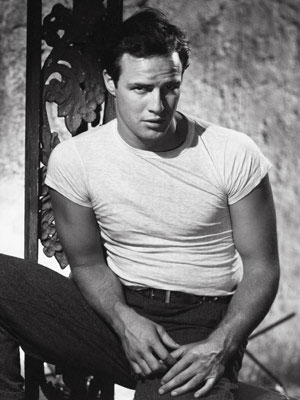 After WWII, actors like Marlon Brando and James Dean popularized the undershirt as outerwear, a trend which gave birth to the modern T-shirt.

After World War II, veterans continued to wear their uniform pants and undershirt as casual wear. From that practice evolved both the modern T-shirt and the modern undershirt — which are sometimes, but not always, the same thing, as we’ll explore in the next section.

Function of an Undershirt 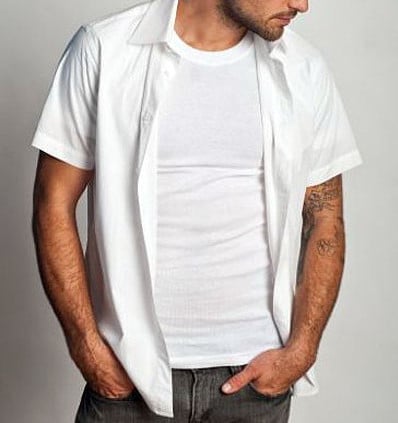 The basic purpose of an undershirt is to absorb your sweat. It’s there to provide a defensive layer between your body and your more expensive clothing.

A good undershirt can also provide insulation when needed, and some are worn to “compress” the figure in a slimming attempt. But for the most part it’s a sweat rag. Don’t shy away from thinking of it as such.

The easiest way to explain undershirts is to say that it’s pretty much exactly like underwear for your upper body. Some guys go without it entirely, and lots of guys have their own preferred style, but for most of us it’s a basic necessity that keeps the rest of our clothes from getting gross.

The reason we have so many different styles is that climates and the clothing worn in them can vary widely. A thick, knit undershirt with long sleeves and a high collar makes sense in a snowy winter, but the same wearer might want a short-sleeved variety with a deep V-neck or scoop neck in the summer, so that he can wear short sleeved shirts with the top couple buttons undone.

Add in the really high-tech ones — athletic gear and compression shirts, mostly — and you’ve got a wide range of products. Some are as plain and utilitarian as you can get; the upper-body equivalents of plain white cotton briefs. Others are stylishly designed for visible wear, especially in the athletic sector.

But at the end of the day, they’re all there for the same reason: your body eventually makes the clothes it’s touching pretty gross, and an undershirt is a lot cheaper to wash and eventually replace than your nice clothes.

Most readers here probably know that showing your undershirt is considered a bit gauche.

But the lines have blurred in modern fashion. High-performance athletic garments are functionally “undershirts,” but are also made in stylish cuts with designer patterns, in the assumption that they’ll be worn as the top layer. Actors in major motion pictures routinely strut around in light knit shirts and nothing more on their upper bodies — think Robert Downey Jr. in all the recent Iron Man films, or Daniel Craig in Skyfall.

So what should you be wearing as an undershirt, and what can you wear as a lightweight outer layer on warm days? 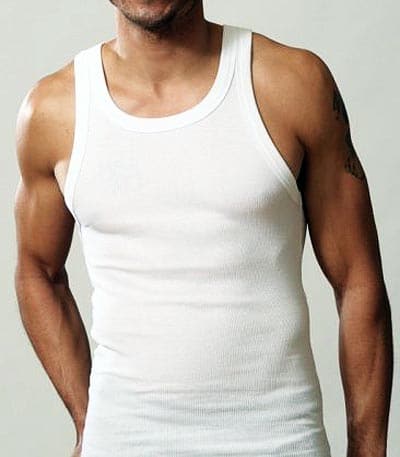 Meet the lowest rung in the style ladder — the white cotton tank top.

You can get these for about as cheap as clothing comes — maybe $10-15 for a pack of three at places like Walmart and Target.

The flip side of that, of course, is that they’re not actually all that useful. Most have armholes cut much too large (to make sure the product fits as many men as possible), meaning that you don’t have any underarm protection at all. It’ll soak up a little sweat on your back and that’s about it.

These are really only useful for those who don’t sweat a whole lot, or for men who want to wear very short-sleeved and low-necked summer shirts. 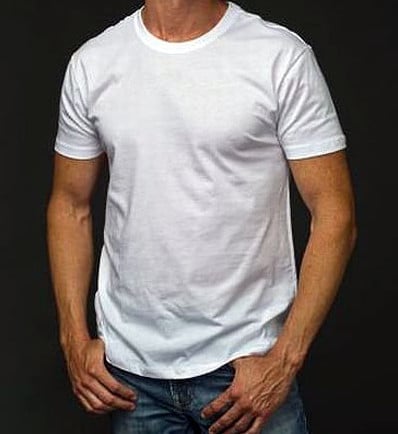 The original T-shirt style began as an undershirt, but became an ubiquitous youth garment by the 1950s. You can go either way with yours — it’s not very classy to go around in just a white T-shirt, but if it’s closely-fitted and you’re in good shape, the look can work. (If it’s a light-colored shirt, be sure the armpits aren’t stained. Visit this post to see how to remove these stains.)

Mostly, though, these are also best as undershirts. They provide good sweat protection, especially if they’re fitted close in the chest and under the arms.

The big disadvantage of the classic crew-neck style is its high neckline. If you’re planning on wearing a dress shirt or similar button-fronted shirt, you’ll need to keep it buttoned up all the way to hide a crew-neck undershirt. Depending on the height of the T-shirt and the cut of the dress shirt, you may even find undershirts that can only be worn with a buttoned collar and necktie, which are of obviously limited use. 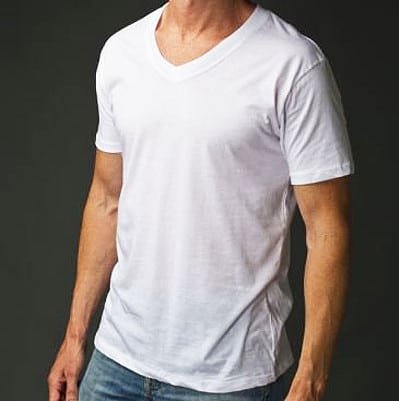 Replacing the crew neck with a V-neck is the obvious solution for men who want to wear a shirt with a few buttons left undone. The depth of the V-shape can vary, but most are cut so that you can wear at least one button (besides the collar button) of a typical dress shirt open without showing your undershirt.

These are a more practical option for undershirt purposes, and retain the same good absorbency of the T-shirt style, but they’re even more casual (we might go so far as to say tacky) when visible. Don’t wear them as a visible layer, at least not in plain white or heather gray. If you must have a visible V-neck T-shirt, make it a brightly-colored layer. 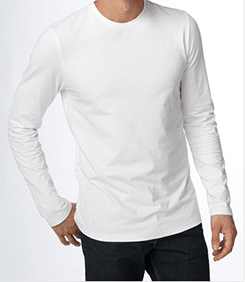 These are the closest direct descendent of the union suit, and sometimes even come with a few buttons at the collar, which can be opened for a little breathability if the wearer feels overheated.

A lot of mid-range American stores (Gap, Old Navy, etc.) sell these in a wide range of colors. These can be used in layered outfits, much like a colored T-shirt. On their own, they still make the wearer look a little underdressed — but that hasn’t stopped the style from becoming popular.

If the long-sleeved T-shirt look is your thing, you can safely consider it permitted these days. Around here we’d still recommend throwing another layer on top, unless you’re wearing it as workout gear (see “Athletic Undershirts,” just below). 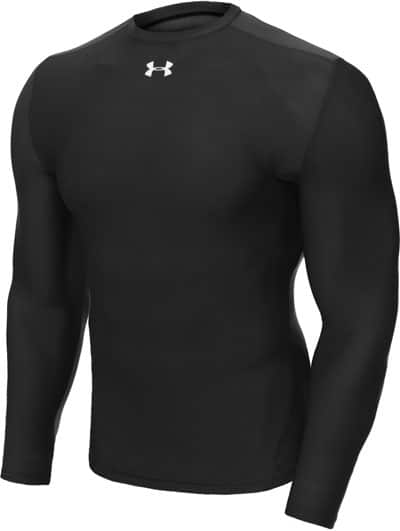 Under Armour is probably the most visible example of a recent trend in light, moisture-wicking athletic shirts that are cut much like traditional undershirts. These use microfiber and synthetic material to create a garment that stays light and dry much longer than a basic cotton shirt.

The high performance of a lot of these tops is offset by a style that’s not really designed for “under” wear. Most male versions come in dark or vividly bright colors, with logos and patterns that are meant to be seen. Even many of the white or light gray ones come with dark logos that will show through light shirts.

You can wear these when you’re exercising — that’s what they’re for — but it’s challenging to work them into dressier outfits. Look for ones done in plain white or heather gray, to keep them discreet beneath dress shirts, and opt for V-necks if you plan on undoing any buttons. 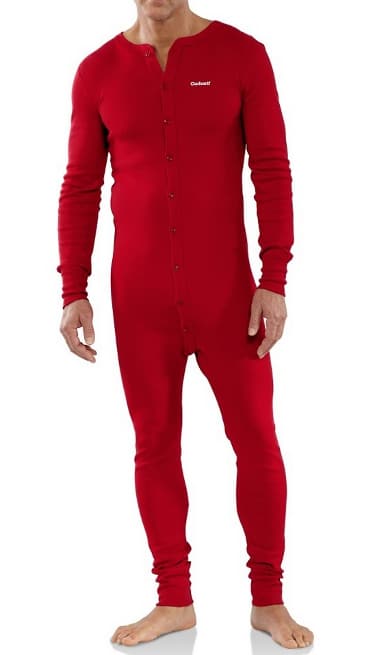 Before we move on, we would be remiss not to mention that while it’s not an undershirt, the union suit lives on and continues to have ardent fans. It serves as a toasty and comfortable layer in the winter.

The best undershirt is one that does everything you want it to.

What that might be depends on your needs and your tastes.

For someone who prizes value and convenience, cheap cotton tank tops or V-necks from a bargain store are the way to go. They’re unglamorous but functional — capable of soaking up sweat to protect the rest of your garments, and infinitely washable until their fabric wears out.

For a park ranger whose uniform covers his arms and collarbone, and who does real physical labor in extreme conditions on a regular basis, a long-sleeved athletic undergarment provides insulation, protection, and moisture-wicking.

For a young man in the summer, a white short-sleeved shirt with a low V-neck hides neatly under casual clothes and allows him to expose a lot of chest.

It all comes down to what you want. If you shop with your needs in mind, you can find exactly what you need pretty easily.

Which type of undershirt do you prefer? Of course some men think you don’t need to wear one at all. Can you get away without wearing an undershirt? Let’s hear from you in the comments!