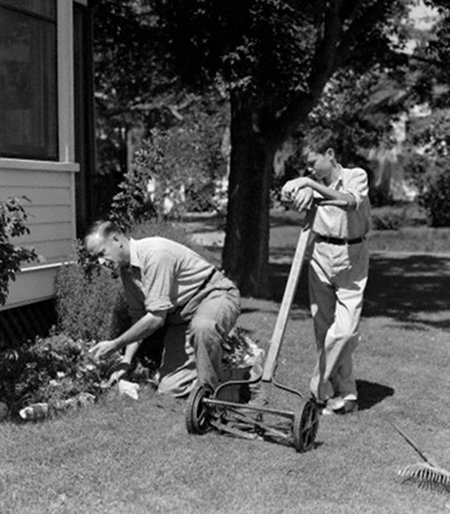 It’s 1968. I’m sitting on the front step of my grandfather’s little house in San Diego. Gramps is pushing a reel mower across his front yard, wearing a Pendleton shirt and a pair of khakis. I hear the snickety-snickety-snickety of the blades. I smell cut grass. He lets me carry the grass catcher and dump it in the trash (this is pre-compost era).

Drive around on a Sunday morning nowadays and in the place of church bells, you’ll hear a chorus of lawnmowers. Gas-guzzling, air-polluting lawnmowers. A gas-powered mower spews more pollution than eleven cars and is responsible for 5% of the greenhouse gases produced in the U.S. Just as bad, homeowners spill more than 17 million gallons of gas a year topping off their lawn and garden equipment. That’s more than the Exxon Valdez.

Reel mowers are also better for your lawn. Instead of rotating blades that chew up and whack off the top of the grass, the reel mower’s blades act like a pair of scissors that snips off the top. Check out the difference between a rotary mower’s cut on a blade of grass vs. a newly-sharpened reel mower: 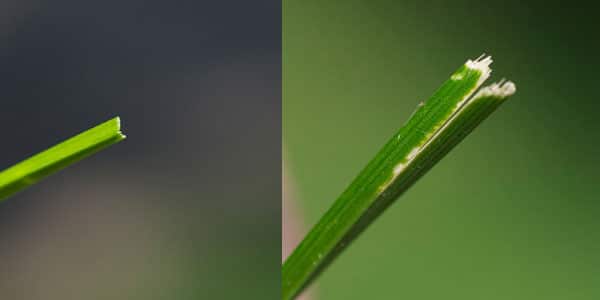 On the left; surgical precision from the reel mower. On the right, well, not so much. A clean cut heals faster and reduces the chances of disease. No kidding.

I believe smaller lawns and larger flower beds and gardens are a good thing. Then, reel mowers make a lot of sense. They’re smaller, easier to store, quiet, require very little maintenance, and have a genteel aesthetic sitting in your garage or garden shed.


If you’re looking to buy a new reel mower, Brett’s guide here is quite handy. But another option is to recycle an old reel mower by giving it a tune up. The good news is that old mowers are usually built like Sherman tanks. Quality steel blades retain their strength; all the mower needs is a good cleaning and honing. 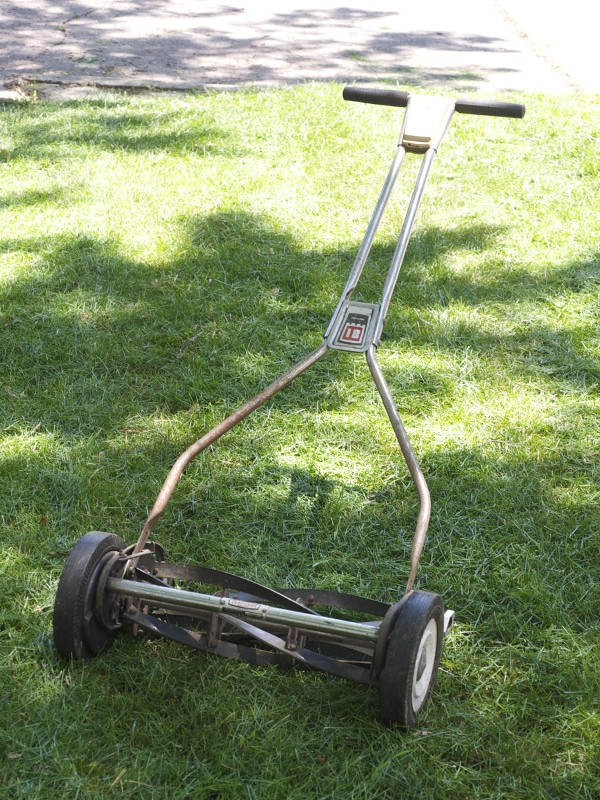 Above is Exhibit A: a Craftsman Reel Mower, about 40 years old. I bought it from an old guy who had it at a garage sale. It hasn’t been used in at least 15 years, but the parts were sound and he was willing to let it go for $25. He wanted $35 but there weren’t many takers. I took it home and stuck it in my garage to acclimatize to its new home.

A few days ago I pulled out the Craftsman 18, hosed it off to get the cobwebs and dirt off, and started the sharpening process. Today, I’ll walk you through how it’s done whether you’re restoring an old gem or maintaining one you’ve had awhile.

How to Sharpen a Reel Mower

There are two critical parts of a mower: the blades and the bed knife. The rest of the mower exists to support these two parts. Wheels drive a gear that spin the blade mechanism, which consists of a series of 5 to 7 blades mounted in a helical fashion. The angle helps snip the grass better. A roller behind the bed knife allows you to adjust the height of the cut. 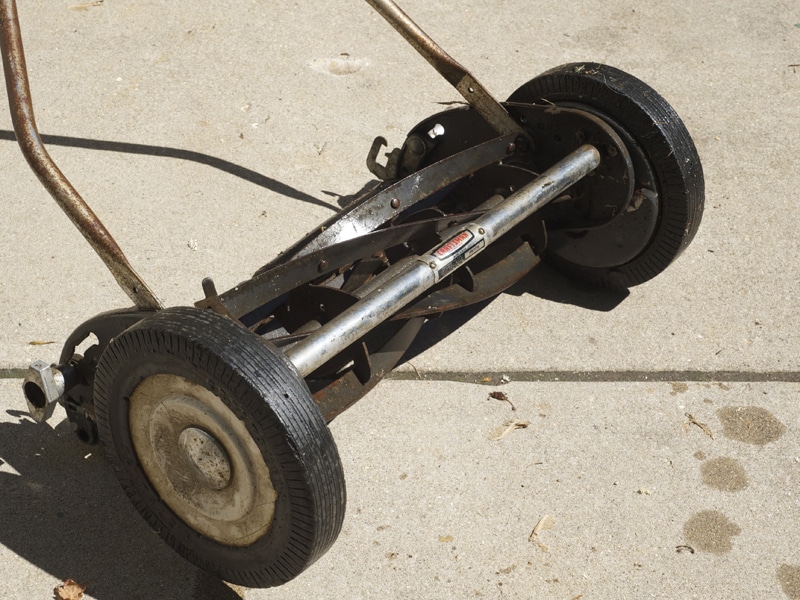 Now it’s tempting to pull out the files, angle grinders, and just start grinding and filing. Not only is this not necessary, it has the ability to ruin the mower. You need a tight clearance to cut. Filing blades and bed knifes is like trying to sharpen scissors in the same manner. No bueno. Since reel lawn mower blades work like scissors; they’re not necessarily as sharp as they are exact. The edge of the blade needs to be true and close to the bed knife. That’s what lapping does. 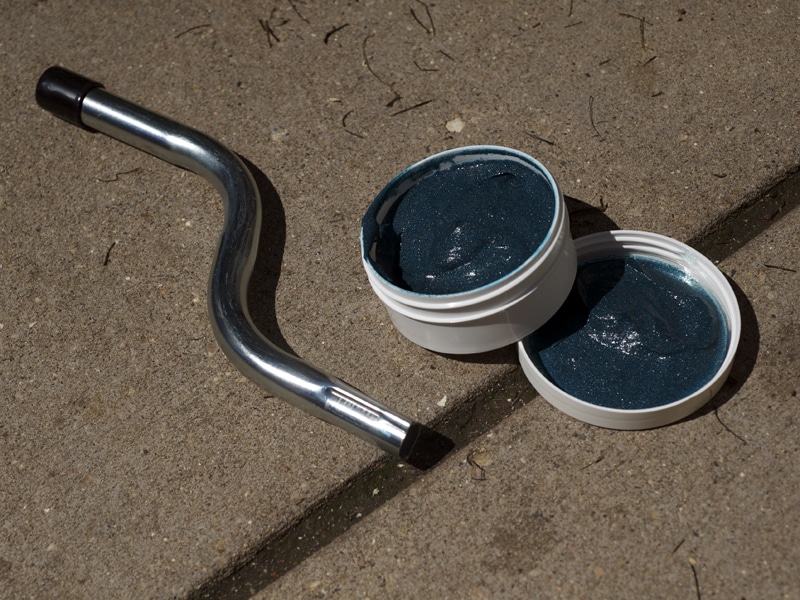 To lap your blades you need two things; lapping compound, an abrasive, and a way to turn your blades. A lapping kit consists of a container of lapping compound and a crank. The lapping compound is basically a heavy duty abrasive, but suspended in a thicker goo so it doesn’t come flying off the blades when you spin then. The handle fits the shaft of most mowers…except in my case, which is fine, as I had other ideas. You’ll see. 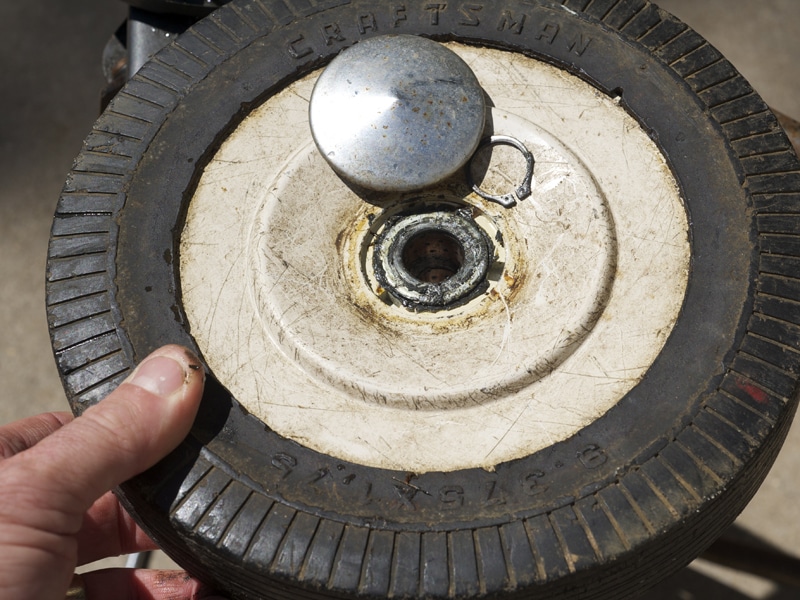 So let’s lap! Start by removing the drive wheel, which is usually the left one when you’re standing behind the mower facing forward. Remove whatever covers the attaching mechanism. Sometimes it’s a nut, sometimes a cotter pin, and in my case, a retaining ring. Whatever it is, remove the wheel and you’ll see the gear that drives the blades. 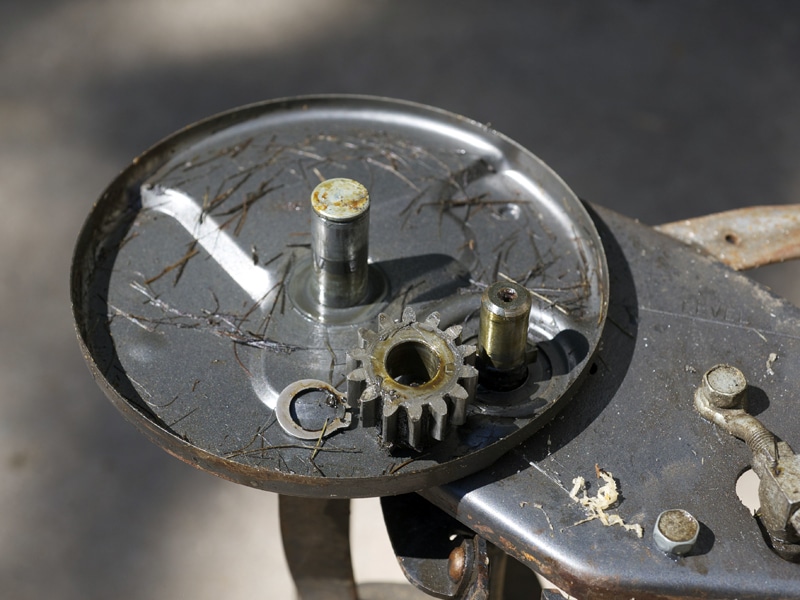 Remove the gear as well, removing whatever is retaining it. Now you will see the shaft that drives the blades.

You want to adjust your blades so that they are in contact with the bed knife. This is done several different ways on different mowers. Usually it’s some sort of combination of a threaded rod and a bolt, although some use a screw and a retaining bolt. Whatever it is, adjust the blade so that it contacts the bed knife equally across the whole width of the blade. Note: if a blade is bent badly so that it hangs up on the bed knife when the others spin freely, a few taps with a hammer or a twist with a pair of pliers can restore the blade, but avoid it if possible. Most of the time the engine (you) can’t generate enough power to bend the blades while moving, so they’re usually straight.

If you spin your blades now, there should be a little resistance and a scraping noise. That’s good. It means the blades are a little too close to the bed knife. Time to change that. 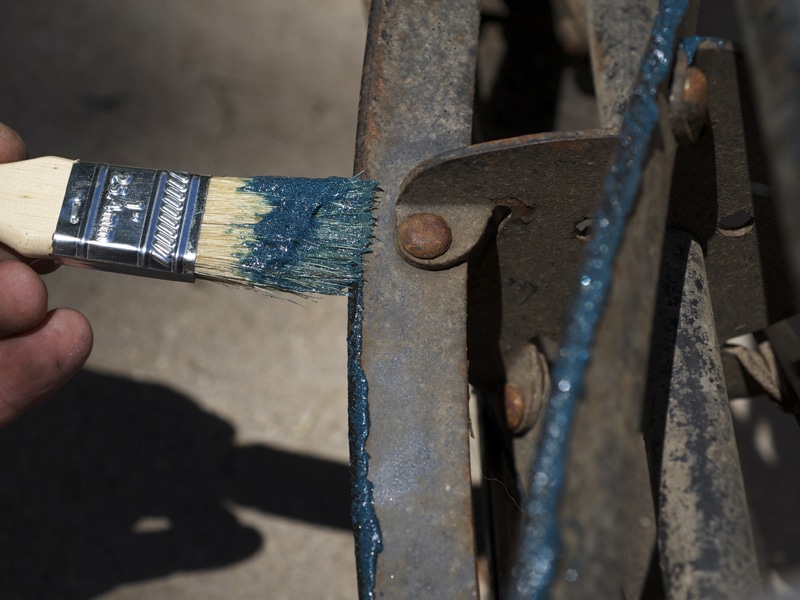 Once coated, start cranking…but do it backwards. That’s right, you want to knives to sharpen backwards. The lapping compound between the bed knife and blades does its job as the blades run so the cutting edges never meet.

Crank for a long time. Ten minutes, maybe. Re-apply lapping compound. Crank some more. You’ll start to see a flat, shiny surface on the blades where the compound has abraded away the surface and created a precise edge matched to the knife bed. Add more compound, keep cranking. At this point (below) you can see the start of a shiny edge, even though there’s still some corrosion showing. That’s okay. 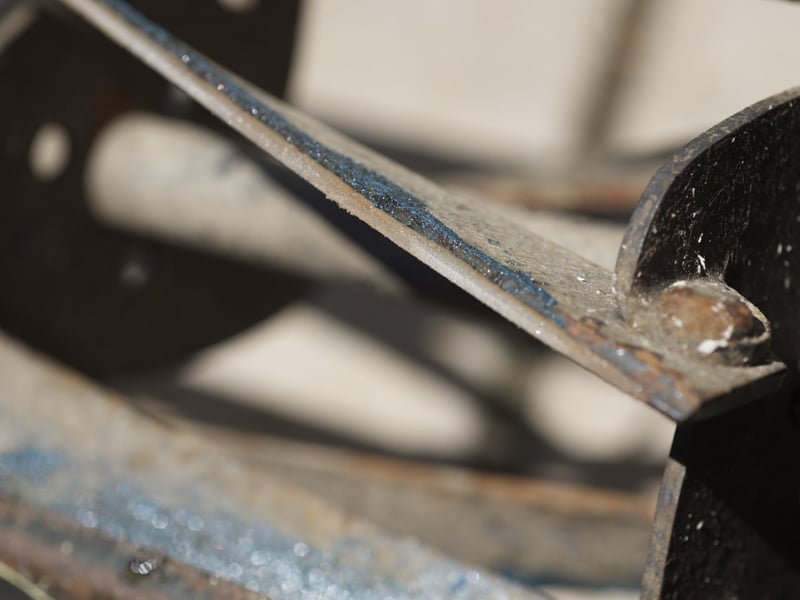 Your arm will probably start to hurt. Reconsider your cranking abilities. I did, and rigged up a cordless drill with a little jury-rigged socket and a piece of inner tube. Whatever works. Making sure the drill was on low and running backwards, I started slow and ran the blades for a minute, added more compound, and ran the blades for a little longer and a little faster. You’ll hear a difference as the lapping progresses; the scraping sound lessens as the blades are honed and material removed. 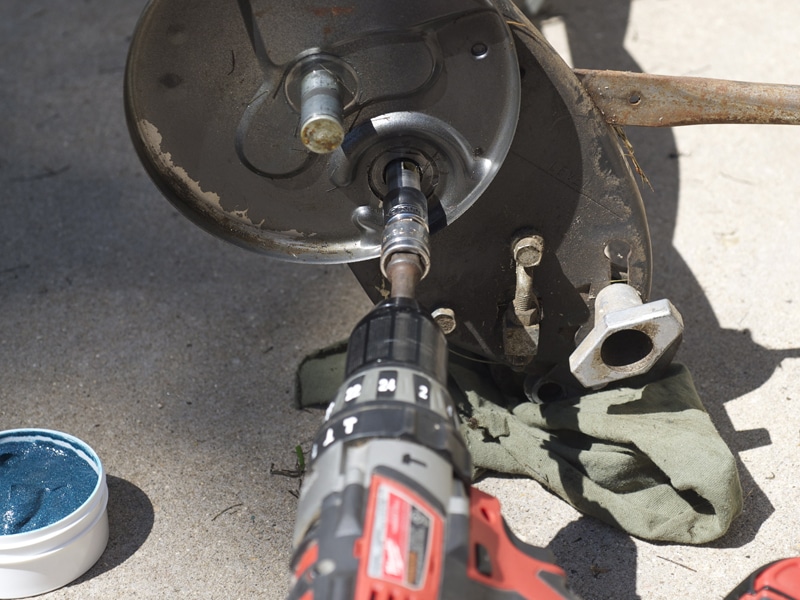 I think I ran the drill for a total of five minutes, adding compound just a few times. Once I saw a shiny finish along each blade, I was done. 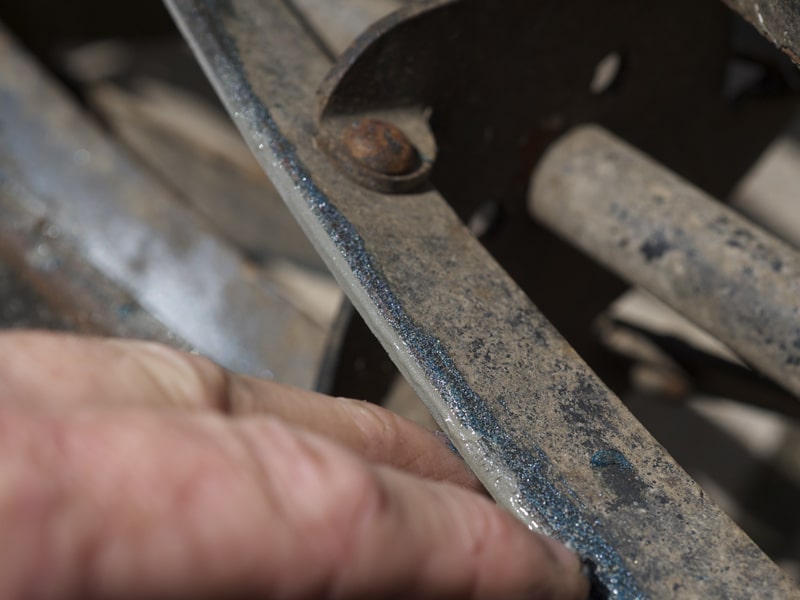 Clean off the compound as best you can, and examine your blades. If there are any spots that look like they’re not quite as clean as other surfaces, you can add more compound and adjust the bed knife so it is closer to the blades. Don’t worry, you’re not going to run out of blade. My mower didn’t need a second lap.

I then backed the blade off just a tiny, tiny bit. You want the gap between the bed knife and the blade to be less than a piece of grass or it won’t cut anything. I’m talking very small back-off, maybe a few thousands of an inch. 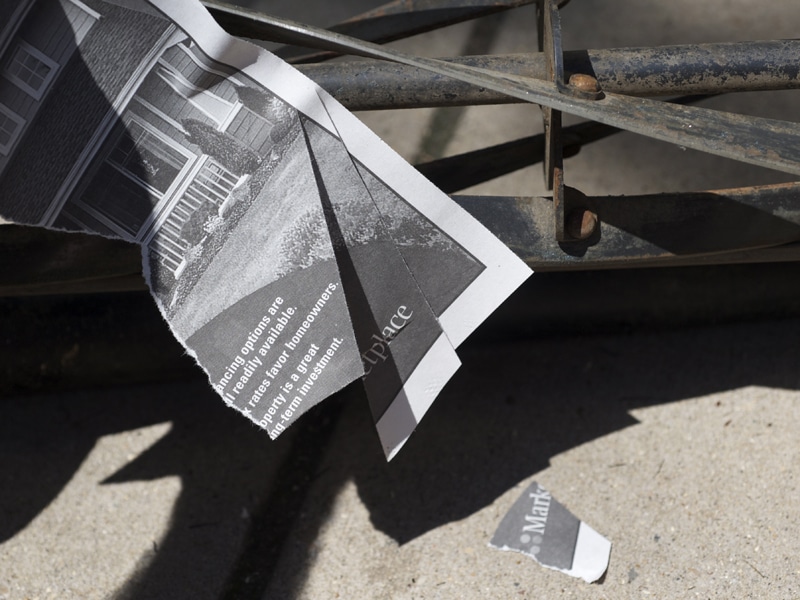 Test your lapping job with a piece of paper. It should cut like scissors. If it doesn’t, adjust the knife bed until it does. 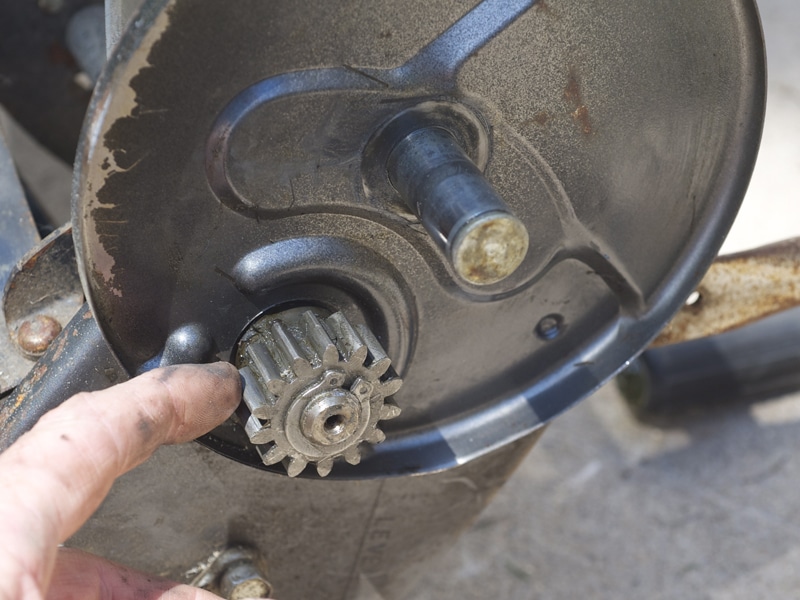 Now reassemble your mower in reverse order, cleaning up as you go and re-greasing anything that needs it.

If you’re restoring an old mower, after sharpening the blades you can spruce it up further if you want a fun little project. Chrome polish, steel wool, and a little gun oil on the blades, and a good old toothbrush with some Simple Green can clean it up real nice. Paint the fenders and bars if you want to. Replace the grips on top. Use motocross hand grips if you want to be bad-ass. 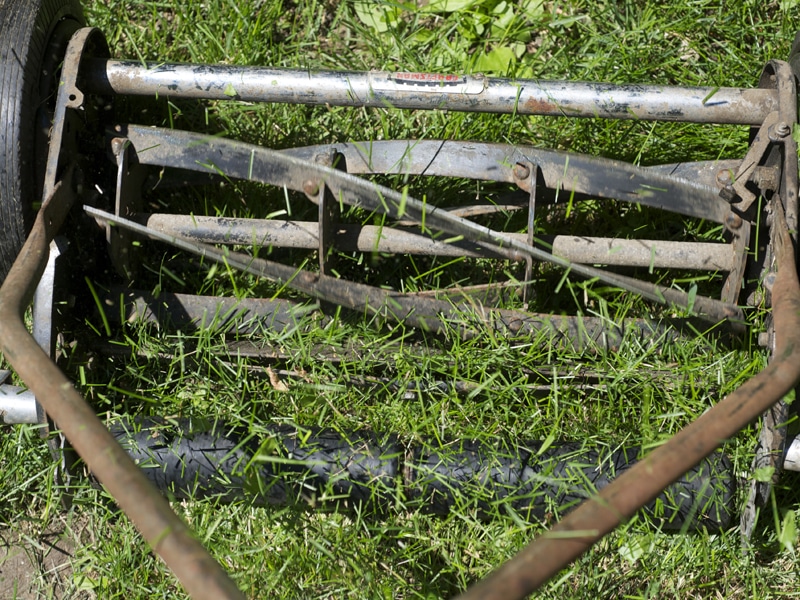 Adjust the roller in the back to its highest setting. Push it across some nice green grass, listening for the snickety-snickety that was so familiar to Gramps. A Pendelton shirt and khakis might just complete the picture.