The first thing we’re going to cover in this series on 31 bits of know-how you should learn before heading out on your own, is really more of a mind-set than a skill-set, but it’s a crucial building block that will lay the foundation for the rest of the “harder,” more practical skills we’ll be covering throughout the month.

Part of being a grown man is taking care of yourself and making your own decisions. It isn’t until you’re on your own that you realize how much you relied on adults to make your life run smoothly. From doing your laundry to calling the doctor when you’re sick, your parents likely did a lot of things for you.

While you might not be completely self-sufficient right when you move out (many young people rely on their parents for varying degrees of financial support well into their twenties), you can certainly be self-reliant in a number of areas in your life. For example, you shouldn’t need your mom to remind you about important appointments or your dad to bug you about taking your car in to get its routine maintenance. You should be able to remember to do those things yourself. A man with a self-reliant mentality doesn’t wait around for someone else to take care of things that need to be taken care of. If he encounters a problem, he takes the initiative and tries to figure out how to resolve it himself.

So how does a man develop a self-reliant mentality?

One of the best answers I have found to this question actually comes from a great, albeit endearingly cheesy, 1950s educational film called “Developing Self-Reliance.” It’s ten minutes long and definitely worth watching:

In the film, a kind-hearted teacher lays out the four principles of building self-reliance for one of his young students: 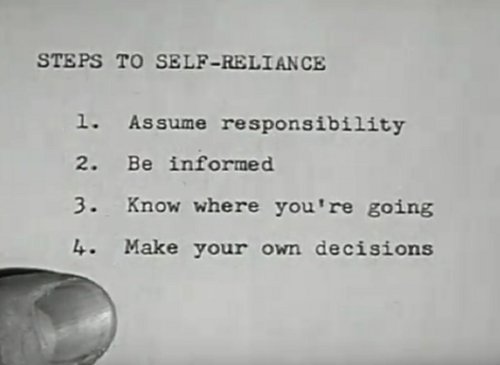 1. Assume responsibility. Start taking responsibility for your life and the things in it. If you’ve relied on your mom to wake you up every morning so you weren’t late to school, it’s time to make friends with the alarm clock on your smartphone. Start using a calendar to keep track of your appointments and important due dates. When you notice your apartment or dorm room is looking messy, clean it up. Don’t blame your teacher or your boss if you’re not doing well in a class or at work. If you make a mistake, own up to it, and try to make it right yourself instead of immediately running back to mom and dad so they can fix it for you. When you come home to visit your parents, don’t fall back into old routines, and let mom do your laundry for you. Parents sacrifice much in taking on not only their own burdens, but the burden of responsibility for each of their children as well. But they should not have to carry more than their own burdens indefinitely; when a child is able, he, in gratitude to the unselfish care he received for many years from his parents, should begin to transfer his load from their shoulders to his, as soon as he possibly can.

I’ll be honest with you. Taking responsibility for your life isn’t all that fun. It requires doing things that are often boring, tedious, frustrating, and time-consuming. You’ll feel the burden of weighing a hard decision and accepting the consequences, even if they’re not favorable to you. You’ll often go un-praised and un-rewarded for being responsible.

But taking responsibility for your life is satisfying. You’ll gain a quiet confidence in yourself as you take control of your own life. You’ll feel empowered. Instead of feeling like life is simply happening to you, you’ll begin to feel like the captain of your destiny and master of your soul. As you assume responsibility for your life, you’ll notice doors open up to new and better opportunities. While you may notice that other young men who don’t take responsibility for their lives seem to enjoy a life of worry-free ease, give it a few years: those same men will probably have progressed little and seem stuck in neutral. You can have little responsibility, a ton of fun and pleasure, and few life options, or a healthy amount of responsibility, a healthy amount of fun and pleasure, and a ton of life options. I personally endorse the latter option. As the video above puts it, while it’s easy to get by by having other people do everything for you, “the trouble is, when you’re not self-reliant, you’ll never do more than just get by.”

2. Be informed. Of course in order to take on more responsibilities, you have to know how to carry out those responsibilities. Some young men continue letting mom and dad do things for them, with the excuse that they just don’t know how to do those things themselves. They often turn to their parents to make decisions for them for the same reason. But the truth is, they’ve never actually tried to figure things out on their own.

This excuse is especially weak in the age of the internet, with answers to many of life’s questions just a Google search away. Need to figure out how to apply for financial aid? Don’t pawn the job off on mom — get on the computer and start researching it yourself.

This isn’t to say that you should completely avoid mom and dad or other adults for advice and counsel. There are some problems or decisions Google just can’t help with. You should definitely take advantage of the practical wisdom older people have acquired by asking for their input when making an important decision or trying to solve a problem.

However, I’d encourage you not to always make your parents a resource of first resort. We frequently turn to our parents when we don’t really want input — we want to be told what to do. And when parents hear about your problem, they often want to take care of it for you, even when you protest. So investigate yourself first; try figuring things out on your own. Experience can be the best teacher. Once you’ve reached a wall, then go talk to your parents. Because you’ve gotten your hands dirty with your issue, so to speak, you’ll be in a better position to ask them effective questions. Instead of feeling like a kid, you’ll feel more like a fellow traveler in the land of adulthood who’s simply looking for advice from someone who has already been there.

In situations where the stakes are high, turn to others sooner rather than later; oftentimes it’s better to learn from the mistakes of others, rather than making them yourself. But by always taking at least the first steps of intelligence gathering yourself whenever you can, you’ll grow and make discoveries you wouldn’t have otherwise.

The self-reliant man is always looking for a chance to learn and expand his knowledge and skills. He reads books for his classes not because he has to, but because he wants to. And whether he’s in college or on the job, he also reads regularly for pleasure. He keeps up with the news and current events. He talks to others and really listens to them. He’s very observant wherever he goes. In this way, he builds up a library of information that he can draw upon when making a decision or solving a problem.

3. Know where you’re going. A self-reliant man has goals that he has set for himself. His aims are not merely those things other people think he should do.  The self-reliant man is autonomous and doesn’t overly rely on others to validate his decisions. A self-reliant man works with an end in mind. He has created a blueprint for his future. When he runs into a problem, he informs himself on what an ideal resolution would be and then works to make it a reality. He plans out his weeks and ensures tasks that he’s responsible for are completed.

4. Make your own decisions. One thing I’ve learned the hard way is that life is actually much easier and a lot less stressful when you proactively make your own decisions.  It’s tempting when you’re younger to simply let life happen to you and hope that decisions and problems will magically resolve themselves. They won’t. In fact, problems and decisions often get bigger and harrier the longer you wait to take action on them. Make proactive decision-making a habit. With any choice or problem you may face, decide on an action plan quickly, and execute it immediately.

Also, while you should certainly seek advice from others to inform your decisions, don’t rely on them to make your decisions for you. It’s your life. Don’t let others live it for you.

Learning to be self-reliant takes time; you’re not magically transformed into a sage, totally autonomous adult the moment you turn 18. Rather, self-reliance is something you develop in stages as you get older, learn from experience, and become more and more independent.

I often get questions from readers like, “When my parents come and visit, is it okay for them to buy me groceries?” “Is it okay for them to pay for my rent?” These men want to know where a young man should draw the line in being self-reliant and receiving assistance from their parents. Unfortunately, I don’t have any easy answers for such queries, and I don’t think there are any hard and fast rules either. I would recommend asking yourself this question: “Will this support lead to more independence down the road or will it lead to greater dependence?”  For example, a recent study showed that college students who get less financial support from their parents think of themselves as adults sooner, drink less, and may be more career-oriented, while those whose parents give them a free ride are more likely to engage in risky behaviors like binge drinking, and may be less motivated in their studies. But students with parents who provide no assistance, are more likely to take longer to graduate and drop out altogether. Basically, what the study found was that either too much self-reliance or too little can lead to a compromised college career, and less independence in the future; thus, the authors of that study recommended a balanced approach in which parents provide some assistance, while the student is responsible for other expenses. All of which is to say, it’s best to grow into self-reliance in stages — concentrate on becoming self-reliant in whatever you can, wherever you’re at in life, in ways that don’t compromise your ability to gain more independence in later stages.