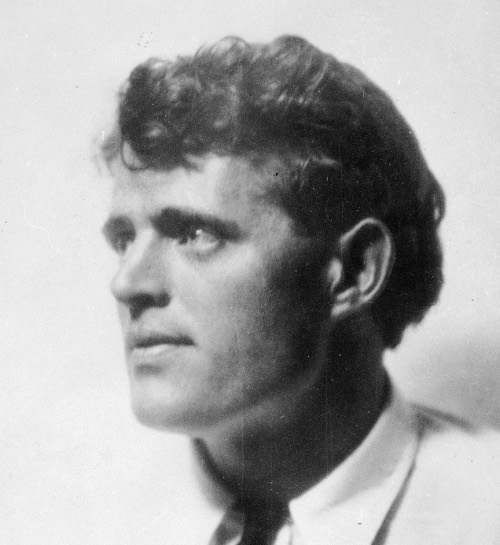 Editor’s note: The following is an excerpt from an article Jack London wrote for a journal on writing. But the principles he outlines can be applied to all, writers and non-writers alike.

“On the Writer’s Philosophy of Life”
By Jack London
The Editor, 1899

Now this phrase, “a philosophy of life,” will not permit of precise definition. In the first place it does not mean a philosophy on any one thing. It has no special concern with any one of such questions as the past and future travail of the soul, the double and single standard of morals for the sexes, the economic independence of women, the possibility of acquired characters being inherited, spiritualism, reincarnation, temperance, etc., etc. But it is concerned with all of them, in a way, and with all the other ruts and stumbling blocks which confront the man or woman who really lives. In short, it is neither abstract nor ideal, but an ordinary working philosophy of life.

Every permanently successful writer has possessed this philosophy. It was a view peculiarly his own. It was a norm, or a series of norms, by which he measured all things which came to his notice. By it he focused the characters he drew, the thoughts he uttered. Because of it his work was sane, normal, and fresh. It was something new, something the world wished to hear. It was his, and not a garbled mouthing of things the world had already heard.

But make no mistake. The possession of such a philosophy does not implicate a yielding to the didactic impulse. Because one may have pronounced views on any question is no reason that he assault the public ear with a novel with a purpose, and for that matter, no reason that he should not. But it will be noticed, however, that this philosophy of the writer rarely manifests itself in a desire to sway the world to one side or the other of any problem. Some few great writers have been avowedly didactic, while some, like Robert Louis Stevenson, in a manner at once bold and delicate, have put themselves almost wholly into their work, and done so without once imparting the idea that they had something to teach. And again, many have used their philosophy like a secret implement. By its aid they have fashioned thought, and plot, and character, so that in the finished product it was all-pervading, yet nowhere apparent.

And it must be understood that such a working philosophy enables the writer to put not only himself into his work, but to put that which is not himself but which is viewed and weighed by himself. Of none is this more true than of that triumvirate of intellectual giants-—Shakespeare, Geothe, Balzac. Each was himself, and so much so, that there is no point of comparison. Each had drawn from this store his own working philosophy. And by this individual standard they accomplish their work. At birth they must have been very similar to all infants; but somehow, from the world and its traditions, they acquired something which their fellows did not. And this was neither more nor less than something to say.

Now you, young writer, have you something to say, or do you merely think you have something to say? If you have, there is nothing to prevent your saying it. If you are capable of thinking thoughts which the world would like to hear, the very form of the thinking is the expression.

If you think clearly, you will write clearly; if your thoughts are worthy, so will your writing be worthy. But if your expression is poor, it is because your thought is poor; if narrow, because you are narrow. If your ideas are confused and jumbled, how can you expect a lucid utterance? If your knowledge is sparse or unsystematized, how can your words be broad or logical? And without the strong central thread or a working philosophy, how can you make order out of chaos? How can your foresight and insight be clear? How can you have a quantitive and qualitative perception of the relative importance of every scrap of knowledge you possess? And without all this how can you possibly be yourself? How can you have something fresh for the jaded care of the world?

The only way of gaining this philosophy is by seeking it, by drawing the materials which go to compose it from the knowledge and culture of the world. What do you know of the world beneath its bubbling surface? What can you know of the bubbles unless you comprehend the forces at work in the depths of the caldron? Can an artist paint an “Ecce Homo” without having a conception of the Hebrew myths and history, and all the varied traits which form collectively the character of the Jew, his beliefs and ideals, his passions and his pleasures, his hopes and fears! Can a musician compose a “Ride of the Valkyries” and know nothing of the great Teutonic epics? So with you—you must study. You must come to read the face of life with understanding. To comprehend the characters and phases of any movement, you must know the spirit which moves to action individuals and peoples, which gives birth and momentum to great ideas, which hangs a John Brown or crucifies a Savior. You must have your hand on the inner pulse of things. And the sum of all this will give you your working philosophy, by which, in turn, you will measure, weigh, and balance, and interpret to the world. It is this stamp of personality, of individual view, which is known as individuality.

What do you know of history, biology, evolution, ethics, and the thousand and one branches of knowledge? “But,” you object, “I fail to see how such things can aid me in the writing of a romance or a poem.” Ah, but they will—not so much directly as by subtle reaction. They broaden your thought, lengthen out your vistas, drive back the bounds of the field in which you work. They give you your philosophy, which is like unto no other man’s philosophy, force you to original thought.

“But the task is stupendous,” you protest “I have no time.” Others have not been deterred by its immensity. The years of your life are at your own disposal. Certainly you cannot expect to master it all, but in the proportion you do master it, just so will your efficiency increase, just so will you command the attention of your fellows. Time! When you speak of its lack you mean lack of economy in its use. Have you really learned how to read? How many insipid short stories and novels do you read in the course of the year, endeavoring either to master the art of story-writing or of exercising your critical faculty? How many magazines do you read clear through from beginning to end? There’s time for you, time you have been wasting with a fool’s prodigality—time which can never come again. Learn to discriminate in the selection of your reading, and learn to skim judiciously. You laugh at the doddering graybeard who reads the daily paper, advertisements and all. But is it less pathetic, the spectacle you present in trying to breast the tide of current fiction? But don’t shun it. Read the best, and the best only. Don’t finish a tale simply because you have commenced it. Remember that you are a writer, first, last and always. Remember these are the mouthings of others, and if you read them exclusively, that you may garble them, but you will have nothing else to write about. Time! If you cannot find time, rest assured that the world will not find time to listen to you.