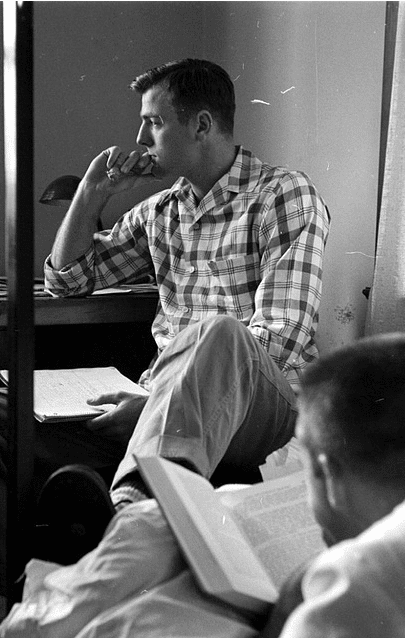 “Running Away from Life”
From Self and Self-management: Essays about Existing, 1918
By Arnold Bennett

To take refuge from life is to refuse it. Life generally offers due scope for the leading instinct in a man or a woman; and sometimes it offers the scope at a very low price, at no price at all.

For example, a young man may have a very marked instinct for engineering, and his father may be a celebrated and wealthy engineer who is only too anxious that the son should follow the same profession. Life has offered the scope and charged nothing for it.

But, on the other hand, a man may have a very marked instinct for authorship, and his father may be a celebrated and wealthy engineer who, being convinced that literature is an absurd and despicable profession, has determined that his son shall not be an author but an engineer. “Become an engineer,” says the father, “and I will give you unique help, and you are a made man. Become an author, and you get nothing whatever from me except opposition.”

Life, however, which has provided the instinct for literature, has also provided the scope for its fulfillment. The scope for young authors is vaster to-day on two continents than ever it was. But the price which in this case life quotes is very high. The young man hesitates. The price quoted includes comfort, parental approval, domestic peace, money, luxury, and perhaps also a comfortable and not unsatisfactory marriage. It includes practically all the ingredients of the mixture commonly known as happiness. Of course, by following literature the young man may recover all and more than all the price paid. But also he may not. The chances are about a hundred to one that he will not. He is risking nearly everything in order to buy a ticket in a lottery.

Let us say that, being a prudent and obedient young fellow, he declines to beggar himself for a ticket in a lottery. His instinct towards literature has not developed very far; he sacrifices it and becomes the engineer. By industry and goodwill and native brains he becomes a very fair engineer, the prop of the firm, the aid, and in due course the successor, of his father. He treats his work-people well. He marries a delightful girl, and he even treats her well. He has delightful children. He is a terrific worldly success, and a model to his fellow-creatures. That man’s attention to duty, his altruism, his real kindness, are the theme of conversation among all his friends. He treats his conscience with the most extraordinary respect.

And yet, if his instinct towards literature was genuine, he is not fundamentally happy, and when he chances to meet an author, or to read about authors (even about their suicides of despair), or to be deeply impressed by a book, he is acutely aware that he has committed the sin of taking refuge from life; he knows that the extraordinary respect which he pays to his conscience is at bottom a doping of that organ; he perceives that the smooth path is in fact the rough path, and that the rough path, which he dared not face, might have been, with all its asperities, the smooth one. His existence is a vast secret and poisonous regret; and there is nothing whatever to be done; there is no antidote for the poison; the dope is a drug—and insufficient at that…

Both men and women can run away from life in ways far more subtle and less drastic than those which I have named. For the sake of clearness I have confined myself to rather crude and obvious examples of flight. There are probably few of us who are not conscious of having declined at least some minor challenge of existence. And there are still fewer of us who can charge ourselves with having been consistently too bold in our desire to get the full savor of existence.

Each individual must define happiness for himself or herself. For my part, I rule out practically all the dictionary definitions. In most dictionaries you will find that the principal meaning attached to the word is “good fortune” or “prosperity.” Which is notoriously absurd. Then come such definitions as “a state of well-being characterized by relative permanence, by dominantly agreeable emotion . . . and by a natural desire for its continuation.” This last is from Webster, and it is very clever. Yet I will have none of it, unless I am allowed to define the word “well-being” in my own way.

For me, an individual cannot be in a state of well-being if any of his faculties are permanently idle through any fault of his own. The full utilization of all the faculties seems to me to be the foundation of well-being. But I doubt if a full utilization of all the faculties necessarily involves the idea of good fortune, or prosperity, or tranquillity, or contentedness with one’s lot, or even a “dominantly agreeable emotion”; very often it rather involves the contrary.

In my view happiness includes chiefly the idea of “satisfaction after full honest effort.” Everybody is guilty of mistakes and of serious mistakes, and the contemplation of these mistakes must darken, be it ever so little, the last years of existence. But it need not be fatal to a general satisfaction. Men and women may in the end be forced to admit: “I made a fool of myself,” and still be fairly happy. But no one can possibly be satisfied, and therefore no one can in my sense be happy, who feels that in some paramount affair he has failed to take up the challenge of life. For a voice within him, which none else can hear, but which he cannot choke, will constantly be murmuring:

“You lacked courage. You hadn’t the pluck. You ran away.”

And it is happier to be unhappy in the ordinary sense all one’s life than to have to listen at the end to that dreadful interior verdict.