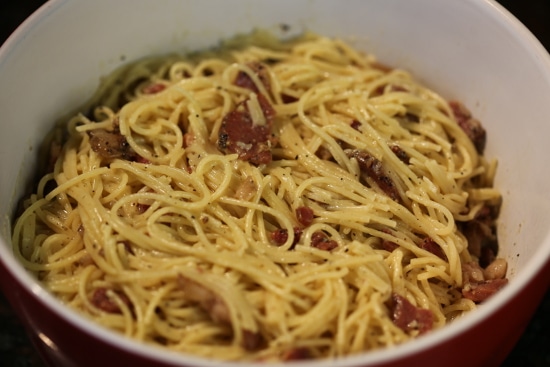 Legend has it that pasta carbonara got its name from carbonaro — the Italian word for men who worked as charcoal burners. The hearty carbonaro were hardworking woodsmen who for centuries turned wood into charcoal by slowly burning it in kilns dotting the Apennine hills near Rome. As they often camped outside for weeks at a time, they could only carry non-perishable foods in their knapsacks, including things like dried pasta and salted pork. If they got some fresh eggs from the local farmers, they could throw everything together to create a delicious, filling dish. Because of this supposed connection with charcoal and laboring men, pasta carbonara has sometimes been called “coal miner’s spaghetti” in the U.S.

Yet, rather than being an authentic, old school concoction created by Roman peasantry, pasta carbonara’s real origins are likely much more recent, and in fact resulted from a collision of American and Italian cultures. The dish may have arisen at the end of WWII, when the U.S. was providing the Italian citizenry with eggs and bacon. In the years after the war, American officers were known to commonly request the dish at the restaurants they frequented.

Seventy years later, and not much has changed. I know I ordered pasta carbonara quite frequently when dining on a trip to Rome. Rich and savory, it may not be the most sophisticated dish, but I’ll be damned if it’s not one of the most delicious. The popularity of pasta carbonara has turned it into a global favorite — wherever you find Italian restaurants around the globe, you often find it on the menu.

But it’s also a simple enough dish to cook at home. You only need a few ingredients, it can be made quickly, and once you get the timing down, it’s not difficult to prepare.

Even though traditional pasta carbonara is already pretty simple to cook, I’ve spent the last few months perfecting a recipe that makes it even easier — both in preparation and clean-up. With two working parents, and two kids, we’re all for doing anything we can around here to streamline getting dinner on the table. My pasta carbonara only requires a single pan, takes less than 30 minutes to cook, and Gus and Scout absolutely devour it.

With that said, whenever you simplify something, you inevitably depart from the pure, traditional way of doing things. Despite the impossibility of tracing its origins, many people have very strong, decided opinions as to how pasta carbonara is done “right.” If that’s you, all I can say is “Turn back now!” I don’t want to be responsible for anyone’s brain exploding, so please, please look away.

How to Make One-Pan Pasta Carbonara 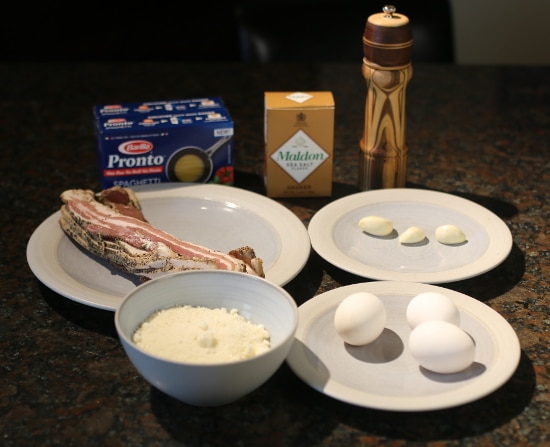 Pasta carbonara only requires a few ingredients, so it’s the kind of dish where the quality of ingredients really does make a difference in the taste, and buying those ingredients a notch or two up from the Kraft variety is worthwhile. Which is to say, get a nice cheese and bacon. 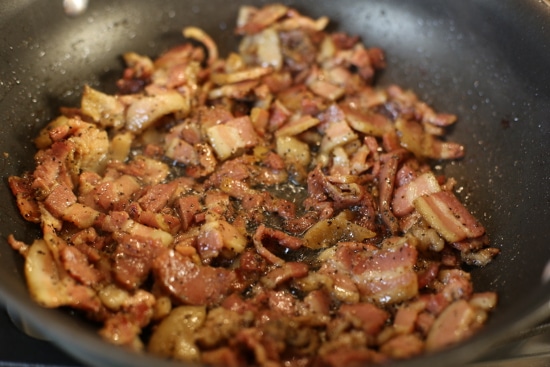 Fry the bacon in a nonstick pan to your desired doneness. Move the bacon around frequently; since we’re going to use this same pan to cook our pasta, we don’t want the pieces getting stuck on the bottom and forming brown crusty stuff.

You can crush and ready your garlic while the bacon is cooking.

Step 2: Remove the bacon and sauté the garlic. 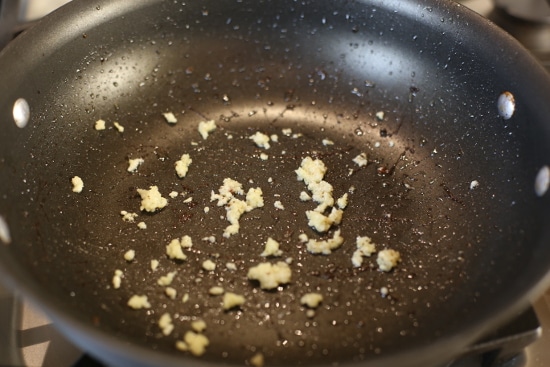 Remove the bacon from the pan and set aside on a plate lined with paper towels. Leave a little bacon grease in the pan. Put in your crushed garlic and sauté for a minute or two, until soft and fragrant. Remove the garlic onto the bacon plate. 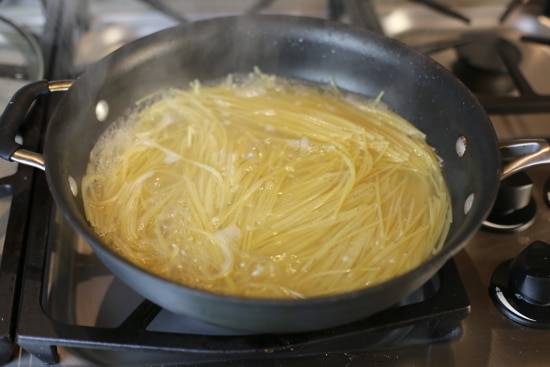 Place the pasta into the pan and immediately pour in 4 cups of cold water (this is still a hot pan, so you want to put the water in quickly to keep your dry pasta from frying in it). From here on, you’re pretty much following the directions on the box. Make sure the pasta is evenly distributed and the water covers it. Bring the water to a boil and let cook, stirring regularly so it doesn’t stick to the bottom. 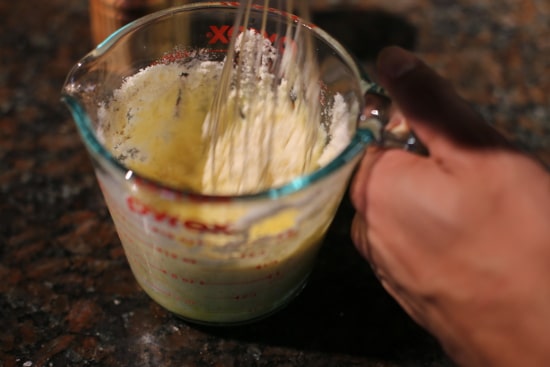 Timing is key when making pasta carbonara. The pasta has to be hot enough when you combine it with the eggs to cook them. So the eggs have to be ready to go when the pasta is finished cooking.

So while the pasta is boiling, put the eggs and the parmesan cheese in a large liquid measuring cup (this makes for easy pouring). Whisk the eggs and cheese together well, getting rid of any lumps. Add an ample dose of black pepper and a small pinch of salt — I like to use smoked sea salt (crushed between my fingertips) to up the smokiness of the dish even more. 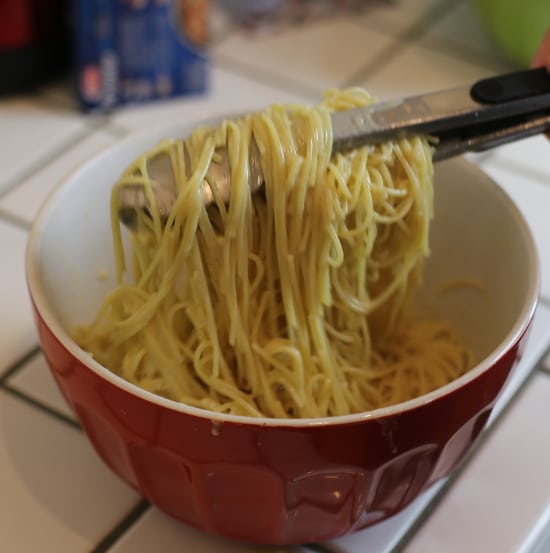 Once the pasta has absorbed most of the water and is done cooking, turn off the heat, and pour the pasta into a large serving bowl. (You can try adding the eggs right into the pasta pan, but you run the risk of the hot pan scrambling the eggs.) Immediately add your egg sauce to the bowl. You want the hot pasta to cook the eggs, but not scramble them, so quickly mix the eggs and pasta around. I like to use tongs to easily lift up and mix portions of the pasta. Keep mixing until the eggs form a kind of shiny, silky sauce on the strands of spaghetti. Add in your sliced bacon and give the mixture a few more stirs.

Serve with extra parmesan, if desired. 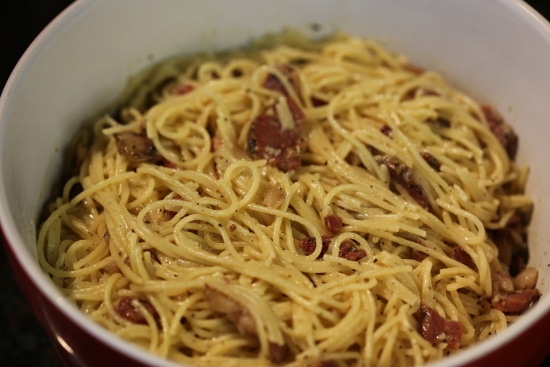 There you go: a rich, hearty, smoky, salty, cheesy dish that’s fit for a coal miner and perfect for fall and winter. And you only dirtied one pan!