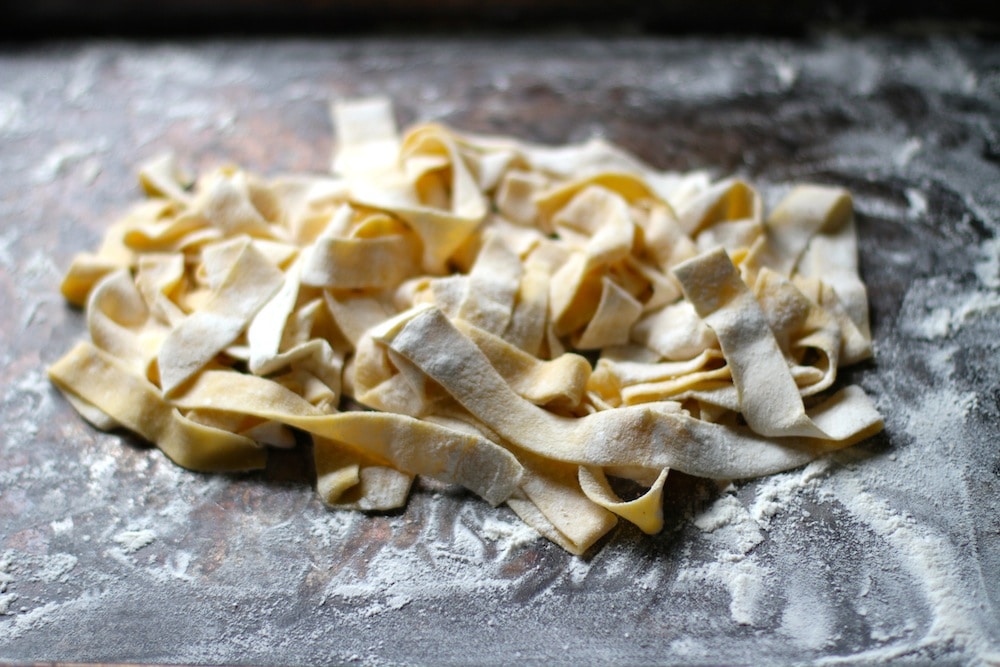 To date, I’ve never had to sleep in the doghouse.

As a kid, I fondly remember the first time I thought I’d have such an opportunity. Dad and I were returning late from a camping trip, and I remember him telling me that if we didn’t hurry up – mom would have us sleeping in the doghouse. Admittedly, it sounded like a good idea at the time.

It wasn’t until I was married that I found out that sleeping in the doghouse wasn’t such a great thing. It’s amazing what a little age and experience can teach us gents.

Truth be told, being ordered to sleep in the doghouse is rarely a threat that I encounter from my beautiful wife. And since I know we have a lot of folks who read from across the pond, allow me to clarify that sleeping in the doghouse means that you are not welcome to sleep in the same bed as your wife or significant other – be it the couch, the floor, a friend’s place, a hotel, or (and hopefully never) an actual doghouse.

There are times, however, that I might forget about my priorities and end up flubbing or on the wrong side of an argument with my wife. It’s in those instances that I typically know she’s had enough of me. Since neither of us enjoys harboring our grievances for very long, I usually admit my fault, beg for forgiveness, and make fresh pasta.

You see gents, knowing how to make fresh pasta will get you far in life, especially with the ladies.

I know I’ve repeated this almost ad nauseam in the past, but I’m of the belief that the kitchen is a very manly domain. It sets a stage that provides us men with an opportunity to learn, refine, create, and share. In the same way that you take pride in knowing how to tie a bowtie, or drive a stick shift, I want you to know how to roast a chicken and how to properly make fresh pasta.

Don’t get me wrong – there’s nothing wrong with dried pastas. They are convenient, tasty, and are always a staple in my pantry. That said, there is something special about making and eating fresh pasta. It has a certain…je ne sais quoi.

With just a few ingredients, no fancy machines, and a bit of patience and willingness to learn, you can create your own pasta at home to serve alongside your favorite sauce. Not only is making your own pasta impressive and delicious – it is also quite simple to prepare.

And besides – nobody really wants to sleep in the doghouse.

There are many schools of thought on the proper pasta ingredients. Some recipes are quite straightforward, like mine below, whereas other recipes might advocate for certain flour varieties and combinations, oils, enhancements, etc. I’m sticking to super simple ingredients that you can find at any grocery store. As you further your skills, you can try out varying flours and mixtures, ingredients, and techniques to produce the specific results you might be trying to achieve.

*Recipe will yield about 6 servings

How to Make Pasta 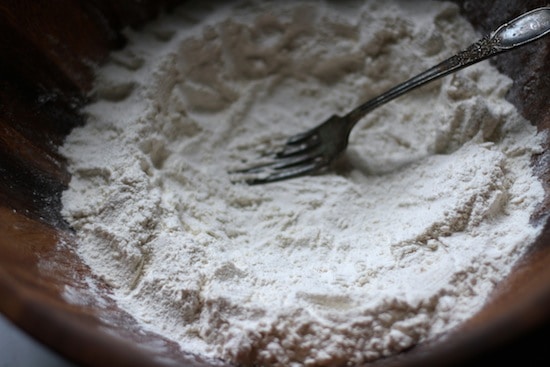 Unlike most traditionalists, I like to pile the flour into a mixing bowl rather than directly on the counter or work surface. I find that this technique is much easier for beginners, as the wet mixture doesn’t have a chance to run amuck if you mess up. After the flour has been added, make a very large well in the center. 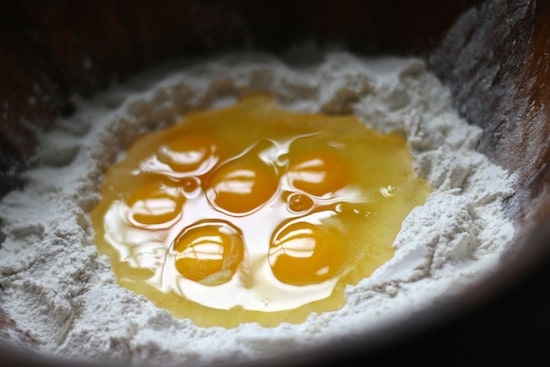 Carefully crack the eggs and add into the center of the well. 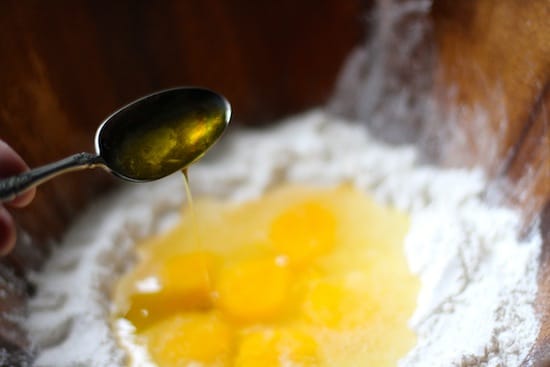 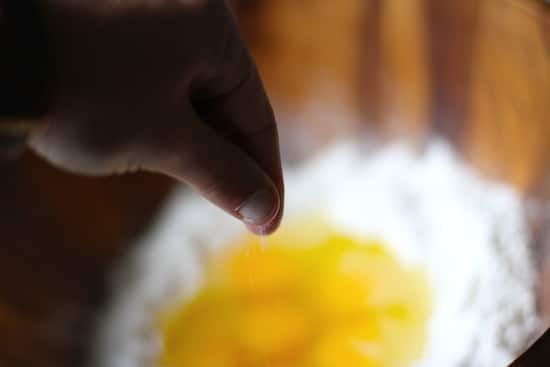 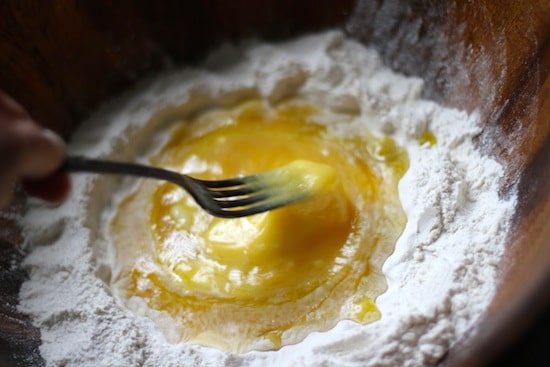 Using a fork, gradually scramble the eggs, while mixing the wet ingredients into the flour until combined. This is where you’ll appreciate me telling you to put this in a mixing bowl to start. 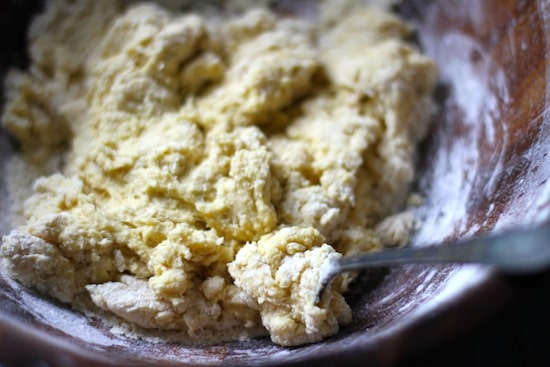 The dough should look like this. Don’t stress if the flour isn’t entirely incorporated. If there is a lot of flour remaining – you probably measured wrong. Kidding. Most likely, since the egg yield can vary, you can simply add a teaspoon of water or two until the mixture comes together as pictured. 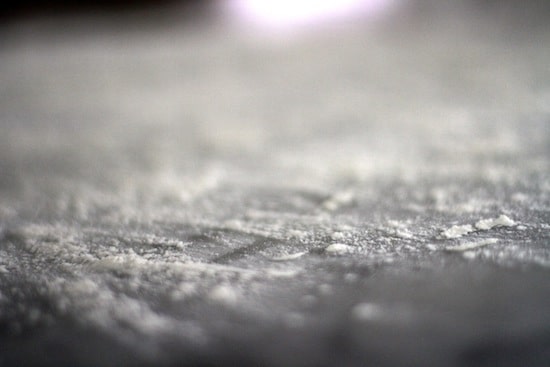 Flour the work surface. I have marble countertops, which stay pretty cold to the touch. Working on a cold surface is typically preferable to prevent sticking. I’ve heard of folks laying cold towels or even ice packs onto a surface prior to working with dough – but beware, such measures could cause the surface to sweat, leading to moisture, rendering your flour useless, and causing even more sticking. In other words, if you have a cold surface, fantastic, if not, you might want to add a touch more flour. 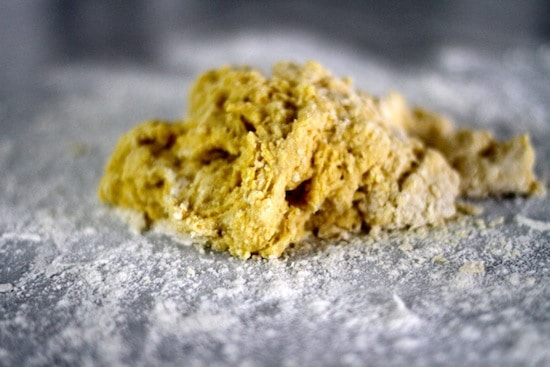 Turn out the dough onto the floured surface. 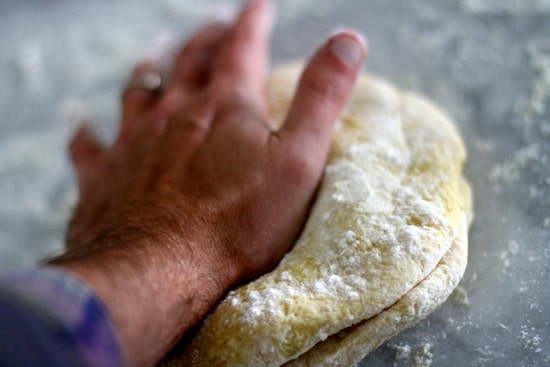 Lightly flour your hands and the top portion of the dough. Knead the dough by pushing it away from you using the heel of your hand. After each push, fold the dough onto itself, turn clockwise a little bit, and continue in this manner, adding flour to prevent from sticking, until the dough is elastic and smooth, about 5 minutes. Form the dough into a cylindrical shape and tightly wrap in plastic wrap and place in the fridge for at least 30 minutes, up to overnight. Remove the dough from the fridge, unwrap, and cut into 6 or so small portions. (I suggest rolling the dough into a cylinder shape and cutting into small portions to keep a square shape, making things easier later on. Also, working with smaller portions of dough is more manageable – making it easier to get thin, delicate pasta.) 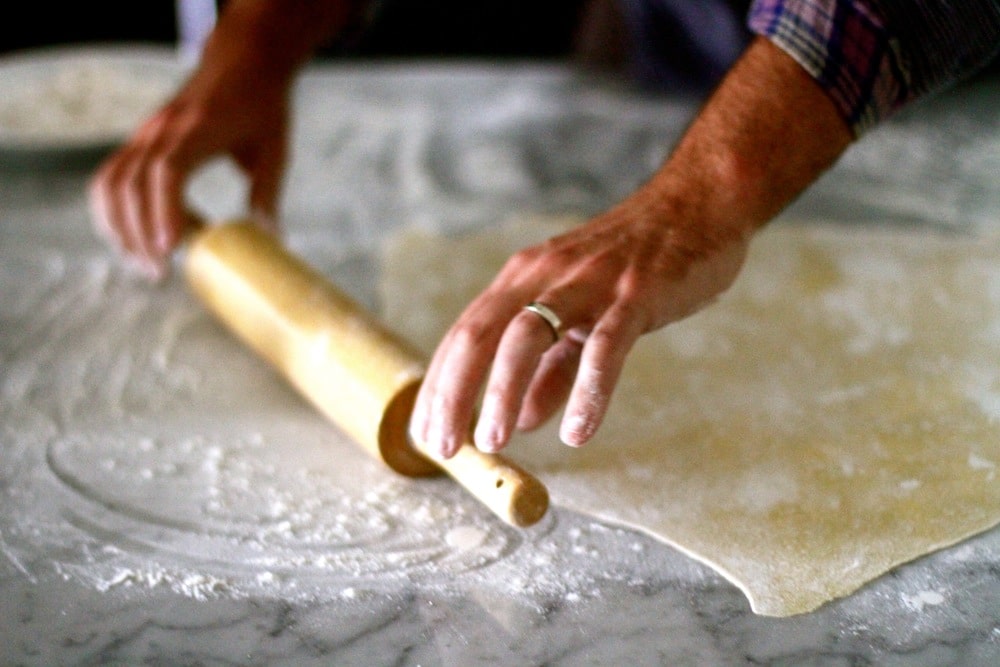 Dust a rolling pin with flour and begin pressing out the dough by working from the center to the outside, easing up in pressure as you reach the edge. 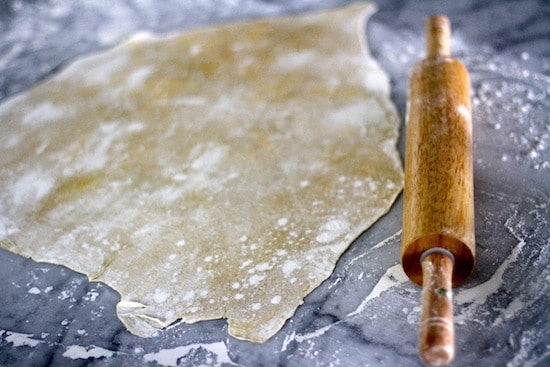 Continue rolling out the dough, dusting with as much flour as necessary to prevent from sticking, until the dough is thin and nearly transparent. Allow the dough to sit for 5 minutes. Repeat procedure for the remaining pieces of dough. 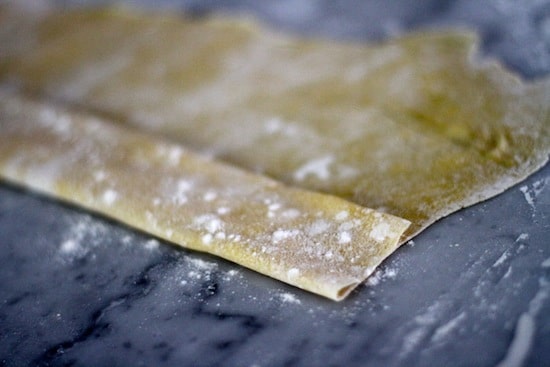 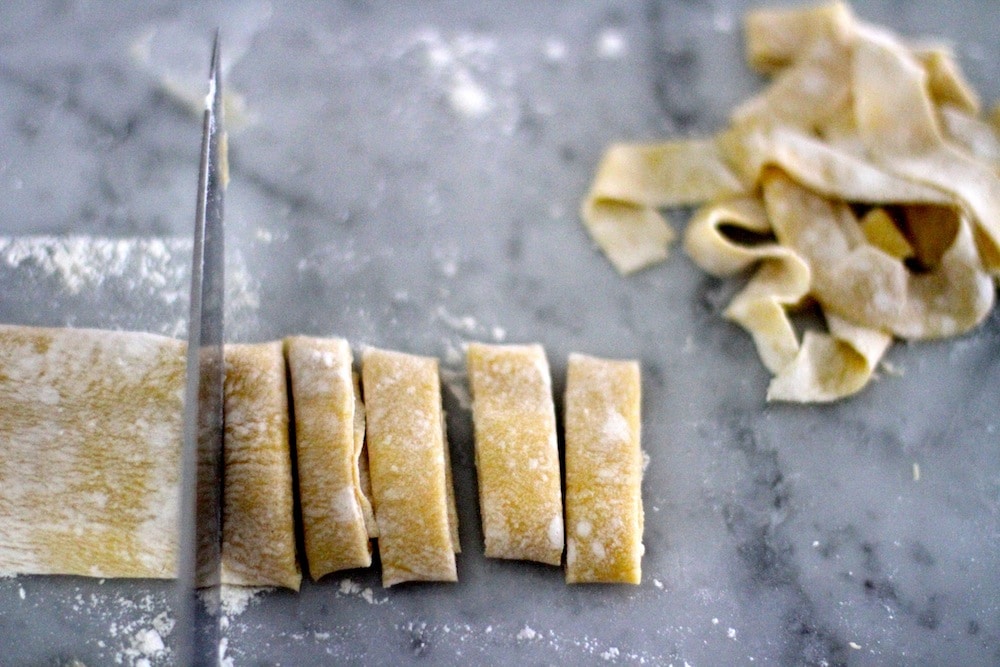 Using a sharp knife, cut the dough into your desired thickness – in this instance I used roughly ½-inch strips to create something between a pappardelle and taglietelle. Cut the pasta as thin or as thick as you wish.

Unfurl the cut noodles, dust with flour, and place on a flour-lined baking sheet. Repeat with the remaining dough, covering the noodles with a damp towel until ready to cook.

How to Cook Fresh Pasta

Bring a large stockpot of water to a rolling boil over high heat on the stovetop. Add in 1 Tbsp. salt and 1 tsp. extra virgin olive oil to the water. Add pasta and cook, stirring a bit, until al-dente, about 3-4 minutes. Drain and serve immediately with your favorite sauce.