Habit
From Ethics for Young People
By Charles Carroll Everett, 1861

In speaking of the influence of companions, I said that a man tends to imitate the persons by whom he is surrounded; and we saw that while this tendency may work harm, it may also work much good: and that in fact the development of civilization has been largely dependent upon this tendency.

Most of all, a man tends to imitate himself. The fact that he has done a thing once, in a certain way, makes it easier for him to do it again in the same way. The oftener this is repeated, the more fixed does the habit become. At last he cannot do the thing in a different way without great effort. Finally it may become almost impossible for him to do it in a different way.

It is interesting to see the force of habit in little things. In this way one can most easily get an idea of its real power.

Notice its power in such a little matter as putting on one’s clothes, one’s coat, for instance. Almost every one in doing this always puts the same arm first into the sleeve. With some it is the right arm and with some it is the left. Probably very few, if they were asked, could tell which arm they put in first; but as soon as they undertake to do the thing, the arm which commonly goes first makes its movement; and it is only by a strong act of will that it can be made to give way to the other…

Observe, farther, how skill is acquired in any handiwork, so that at last the work goes on better when we are not thinking of it, than when we attend to what we are doing. The fingers of the skillful pianist take care of themselves, and the old ladies can read as they knit. So strong does habit, as the result of training, become, that it is said to be impossible for a good swimmer to drown himself, unless he be tied hand and foot. By habit that has become an instinct, the body practises the lesson that it has learned; and the man who has thrown himself into the water swims in spite of himself.

Notice now the good results of this tendency of habits to become fixed. In some cases, like those to which I have referred, the life of the person is, in a sense, doubled. As was just said, the old ladies knit and read or talk at the same time. So in very many things, the body that has been trained does the work while the mind is left free to busy itself as it will.

Another great advantage that springs from the fixity of habits is found in the fact that, by means of this, our lives may make real progress. What we have gained is secured to us.

Think how hard it would be if we had continually to start again from the beginning. How the soldier shrinks when he first goes into a battle; how gladly he would flee. It is said that green soldiers are sometimes placed alternately with those that have been seasoned in many a fight, that the stability of the veterans may keep the raw recruits in their place. The old soldiers have got so in the habit of marching and standing as they are told, that it has become with them a matter of course.

Consider, too, how a man who is in the habit of handling money lets it pass through his hands with hardly a thought of the possibility of keeping any of it. In such cases habit may sometimes be a better safeguard than principle that has not hardened into habit. Principle untrained may sometimes give way to a temptation which habit would withstand.

This fact applies to everything that we do, and to every relation of our lives. We can make a habit of honesty, of industry, of kindliness, of attention, of courtesy, and of whatever we will. Indeed, Aristotle, one of the wisest men of antiquity, defined virtue as a habit of rightdoing.

Consider what power we have thus over our lives. We shape them to a large extent as we choose, and then, through habit, they tend to harden into the shape that we have given them, as the plaster hardens into the shape which the artist has chosen.

The matter has, very obviously, another side. Bad habits form as readily as good ones. I am not sure that they do not form more readily than good ones, because virtues require more effort than faults. We drift into faults; but to make the best life we have to take control of it and guide it.

Think, now, how many bad habits are formed,— habits of inattention, of carelessness, fretfulness, of evil speaking, of selfishness, and others that are even worse.

Indeed, a bad habit is the last thing that most of us are afraid of. We think that we are acting always from our own choice, that it is no matter what we do now, because another time, whenever we wish, we can do differently. But all the while a certain habit is forming and hardening, until at last we find ourselves almost helpless. Thus, even our tastes, our amusements, our selection of books, the tendency even of our most secret thoughts, are becoming fixed, and we are becoming permanently the persons we meant to be only for the moment.

If the artist takes such pains with the plaster that he is forming, so that it may harden into a shape of beauty, what care should we take of the habits which are to effect so strongly and permanently our bodies, our minds, and our hearts. 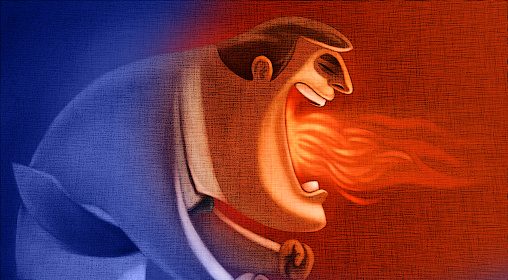 Podcast #805: How to Get Your Anger Under Control