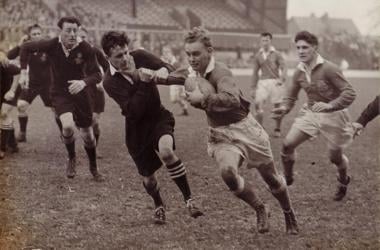 Editor’s note: This is a guest post from Andrew Wyns. Mr. Wyns is the Executive Director of Bridges of Greater New York, a transitional housing program for men struggling with addiction and being released from prison.

The sport of rugby finds its roots in soccer. According to legend, in 1823 an English school boy caught a soccer ball during a game and proceeded to run down the field with it toward the opposition’s goal before he was tackled. Today the game is played in nearly 100 countries and holds a world cup every four years with the top 20 ranked teams in the world. Rugby is a full contact sport played with minimal protective gear that requires a very high level of cardio fitness. It is truly the “man’s sport.”

I began playing rugby a few months before my first child was born. I had two black eyes at his Christening, but I was the proudest man on the planet. I have always taken pride in being a man’s man, but as my son grew up I had to learn how to be the man’s father. There is nothing that causes a man to grow up faster than having a baby. As I grew in skill on the rugby pitch, I learned five important lessons that have assisted me in growing as a father.

1. Every Team Needs a Captain

Like in most sports, rugby teams each have a captain. He calls the plays. He negotiates with the referee. Most importantly, he encourages his team to victory.

Every child needs their father to be the captain of their team. Your children are looking for direction. They need someone to set the standard on how to act and react to the obstacles that they will face. Somewhere along the way someone got the idea that we should be best friends with our children. There is no lack of short people to befriend our children; what our children need is for us to be the leader. When fathers do not take a proactive leadership role in their children’s lives, the children still follow whatever negative behavior the father has exhibited.

Rugby is literally the most complete team sport ever. It takes all fifteen players to score and every player needs to know how to play all fourteen other positions.

As fathers, we need to build a team with our children. Not to be mistaken with being their best friend, building  a team with your children means being their companion as they navigate the difficulties of life. We cannot solve all their problems, like bullying on the playground and figuring out the complexities of the opposite sex, but we can be by their side through all of those events. It is the father’s job to offer leadership and companionship, listening to their children’s frustration and pain as well as pointing them toward the light at the end of the tunnel.

We have a saying when it comes to playing defense in rugby: “Bend but don’t break.” Unlike football, rugby does not rely on a certain amount of yardage needed for each play. Rugby turnovers only happen when mistakes are made or the ball is stolen. A good defensive team can give up yards as long as they don’t allow the opposition to break through their line and get behind the defense. It is firm but not rigid. A rigid defense snaps when pushed too hard, but a firm defense will bend but not break.

As captains and team players, fathers have a great need for firmness. Children don’t need a father who is milquetoast, who folds at every pressure that comes his way. On the other hand, children don’t need a father who is so rigid that they never get a chance to fail on their own. Children need the opportunity to fail. My son needed the opportunity to eat too much chocolate one Christmas so he could finally learn that there can be too much of a good thing. Experience is often the best teacher, and if we protect them from everything, our children may never learn why they shouldn’t do certain things. Yet if we allow them to do everything they want, we do not show leadership. As fathers we need to set a standard for our children and direct them. We need to learn to live in the tension between being too soft and being too hard–the balance between bending and breaking.

4. When You Get Hit, Get Back Up and Keep Running

Rugby is an 80 minute game of continuous play. It has been said that a rugby player needs the strength of an Olympic wrestler and the stamina of a tri-athlete. When the ball carrier gets tackled, the play doesn’t stop. The ball carrier must release the ball while other players fight over possession. Once possession is won the tackled player must spring back up to his feet and reinsert himself into the action again.

As fathers we will fail. We will make mistakes. I remember the times when I was too soft. I remember the times that I was too rigid. I have often sat with my head in my hands feeling like a complete failure as a father. But it is never too late to start over. In those times when we come up short we need to get back up and get back into the action. Our children are expecting it and looking forward to it. It shows them our humanity and our strength. Our failures make us better team players and our comebacks make us better leaders. If they see our perseverance as fathers they will model it in their own lives.

5. Be Committed to the Whole Game

As I mentioned earlier, rugby is an 80 minute game. And what compounds the strenuous nature of the sport is the limited number of substitutes–a maximum of 7– that each team is allowed in a single game. There are no line shifts; the offensive line is the defensive line. Rugby players must be committed to playing all 80 minutes and dig deep to finish the game.

As fathers we need to have that same commitment. Quitting is not an option. Yes, single mothers have been successfully raising children for years, but just imagine how those situations would have been improved with a father who was committed to the job. Our children need us to be there for the whole game.