Last week we began a short series of posts on essential “snow play” skills to prepare you for the coming winter. Whether you’re looking to get out in the snow yourself or want to impart invaluable dad knowledge to your kids, these tips will help you get the most out of the white fluffy stuff that for many of you started falling this week! We began by discussing how to make the perfect snow ball. Today we cover the next essential skill to dominate in a snow ball fight: snow fort building.

While trees, mailboxes, and other objects can work as makeshift cover, nothing can protect you from a snow missile onslaught like a well-built snow fort. The following tips on snow fort building were inspired by the awesome instructions in The American Boys Handy Book.

Trace out the fort’s perimeter. In the snow, trace a line that will serve as the fort’s perimeter. Make it large enough to protect 3 or 4 of your comrades along with an arsenal of snowballs. If you lack massive amounts of snow, you might not have the luxury of four walls and will have to make do with just one. Having something to crouch behind is better than being entirely exposed.

Start making snow bricks. You have a few options when making snow bricks. The first method involves rolling big snowballs as if you were going to make a snowman. This method requires no outside tools, just your hands and a strong back. Another option is to form bricks using an empty cooler or plastic tub. Just pack as much snow as you can in the cooler, turn it upside down, and presto! Instant snow brick. I find this method much more efficient than the snowball rolling method.

Build the wall. While one man makes the snow bricks, another man stacks them up to form the walls. A four foot wall is an ideal height. It’s tall enough to protect most children and crouching adults.

Flatten the walls. After you’ve filled in the gaps, take a shovel and spade and sculpt the walls so that they’re perpendicular to each other on the inside, but slanting on the outside. When you’re done, it should look something like this: 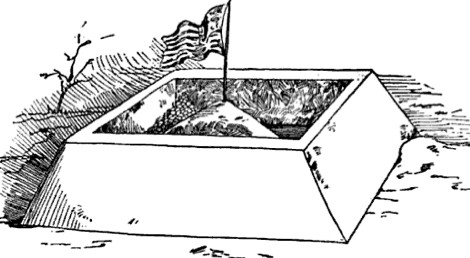 Douse with water. After you complete the fort, fill a bucket up with some water and douse the fort’s wall. The water will help ice things up and turn your snow wall into an ice wall. Start stocking your fort with a snowball ammo cache. Now you’re ready for an out all snowball war or a rousing game of capture the flag.