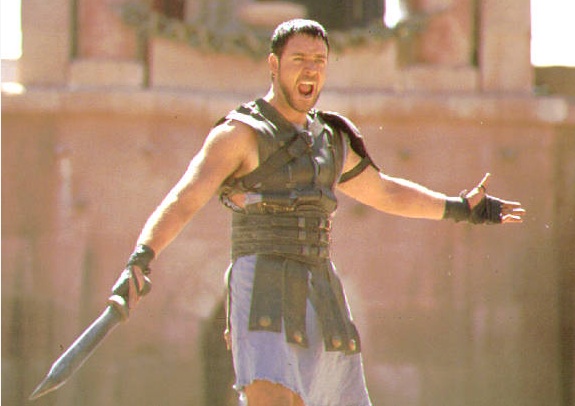 There’s a reason men (and women) loved “Gladiator.” The main character Maximus Decimus Meridius is the epitome of manliness. Here are four lessons on manliness that we can learn from him.

He loved his family and was loyal to them

Maximus was a family man. He turned down the glory of being Emperor of Rome in order to embrace the warmth of familial love.

Marcus Aurelius: When was the last time you were home?
Maximus Decimus Meridius: Two years, two hundred and sixty-four days and this morning.

Although Maximus’ wife was brutally murdered, this did not dampen his devotion to her. Throughout the film a romantic tension exists between Maximus and the Emperor’s daughter. Yet Maximus stayed loyal to his dead wife and family and turned down her advances.

He loved his country

Before Maximus became a gladiator, he was a loyal general in the Roman army. His men respected and honored him greatly.

When Rome falls into corrupted hands, he did not give up on his country. Loyally striving to fulfill the dying emperor’s wish for Roman rule to be restored to the people and the Senate, Maximus toils and sacrifices until the Republic is restored.

He could kick anyone’s ass, yet remained honorable.

“Gladiator” is known for its amazing fight scenes. In every battle, whether in war or in the arena, Maximus always defeated his opponent with a combination of brute force and strategy. He was able to ignore pain to get the job done. He never gave in to fear. Instead, he exuded an a quiet confidence that unnerved his opponents. He never doubted his ability to win.

Maximus: At my signal, unleash hell.

While Maximus excelled at the martial arts, he did not revel in bloodshed. He only fought when he needed to and in the service of a worthy cause.

He was in tune with spirituality

Maximus Decimus Meridius: What we do in life, echoes in eternity.

Maximus devoted time to his spiritual life. He prayed to his gods. He had no doubt that his wife and son were waiting for him in the afterlife. Before each battle, Maximus would reach down and run dirt through his hands. It was as if he was asking the gods to be with him during the battle.

Maximus Decimus Meridius: Ancestors, I ask you for your guidance. Blessed mother, come to me with the Gods’ desire for my future. Blessed father, watch over my wife and son with a ready sword. Whisper to them that I live only to hold them again, for all else is dust and air. Ancestors, I honor you and will try to live with the dignity that you have taught me.