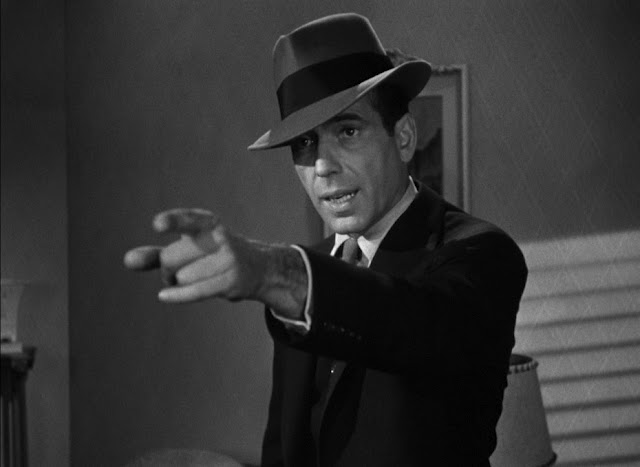 “[He was] as honest as you can expect a man to be in a world where it’s going out of style.” —The Big Sleep

Even if you’ve never picked up one of Raymond Chandler’s novels about quintessential noir private detective Philip Marlowe (or seen him immortalized in film by Humphrey Bogart), you can conjure up the image of the hardboiled gumshoe pretty easily. While Chandler wasn’t the first author to really develop the classic pulp detective fiction of the 30s, 40s, and 50s, he created the archetype of the rugged private eye — a man as quick with a witty one-liner or a metaphor as he was with a gun.

While some hardboiled mystery writers of the era focused on cut-and-dry stories you could cruise through in one sitting, Chandler created something different in Philip Marlowe. Through his inner monologues and interactions with his clients on the case, Marlowe exhibited a type of manliness and modern day chivalry that even back then was going out of style. Today, we’re going to take a closer look at Marlowe, and how his approach to the tough side of life can apply to you and me, even if we’re stuck behind a desk and not out chasing down the clues (and the dangerous dames that come with them).

“Down these mean streets a man must go who is not himself mean, who is neither tarnished, nor afraid. He is the hero; he is everything.” —The Simple Art of Murder

Do you have N.U.T.s? Those non-negotiable, un-alterable terms that set the basis for your life and decisions? Much like a moral code, our N.U.T.s remind us of where we stand and what we stand for when we’re faced with temptation or cutting corners. They keep us resolute in a world of half-measures and fickle values.

While Marlowe never specifically laid out his N.U.T.s during one of his cases, he definitely had a strict set of guidelines that he adhered to. Before he was a private detective, Marlowe was a cop and an investigator for the Los Angeles District Attorney. He left his role as a public servant because he realized the office wasn’t serving the public at all. While not all the cops and attorneys he worked with were corrupt, Marlowe lamented that they never really got anything done, or would settle for closing part of a case rather than put in the extra effort to track down more clues and solve it entirely. When he couldn’t be helpful in an organization that was built specifically to be helpful to the public, he said so long and took off on his own.

How many times have you compromised on your values for the quick fix at work? Have you seen your boss, coworkers, or friends cut corners or make decisions you absolutely knew went against what they believed for the sake of making a profit or saving face or even just for convenience?

Every day, our N.U.T.s are challenged, and we can either let it slide, and slip a little further down the slope of moral compromise, or we can stand up and point out when something is wrong. Sure, it won’t necessarily make you the most popular guy in the break room (even Marlowe took licks for standing up for what was right), but the other option will slowly eat away at who you are.

Which sounds better to you?

“And lastly there is the gorgeous show piece who will outlast three kingpin racketeers and then marry a couple of millionaires at a million a head and end up with a pale rose villa at Cap Antibes, an Alfa-Romeo town car complete with pilot and co-pilot, and a stable of shopworn aristocrats, all of whom she will treat with the affectionate absent-mindedness of an elderly duke saying goodnight to his butler.” —The Long Goodbye

Philip Marlowe lived in Los Angeles in the midst of Hollywood’s Golden Age. It was a time of movie stars living in sprawling, ornate mansions and driving fancy cars; the entire city was entranced by the glamour of Tinseltown. (And not much has changed today.) But Marlowe didn’t seem to pay it much mind. He knew and acknowledged that he lived among the stars of the silver screen, but he never let it get in the way of his work. To Marlowe, the case was the important thing, and even the wealthiest and most glamorous of Hollywood’s high society were ordinary people just like him.

Nowadays, we don’t have to go to Hollywood to get caught up in the glamorous life. All we have to do is putz around on our phones any time we get bored or want to put off doing something important. Sure, you can take a look at the duck confit your friend is snapping photos of instead of eating, or look at the exotic locales and beautiful girls some macho guy is surrounding himself with, but where does that get you? Three minutes older with nothing to show for it.

A little escape into Hollywood or seeing what your adventurous friends are doing on Instagram isn’t such a terrible thing, but it distracts us from doing real, meaningful work. If you turn off the app and keep grinding away, you may even get to a point someday where people are checking out your social media posts.

“I drove down to the Hollywood public library and did a little superficial research in a stuffy volume called Famous First Editions. Half an hour of it made me need my lunch.” —The Big Sleep

Philip Marlowe wasn’t afraid to get tough when he needed do, and he could give any punk or gangster on the street a run for their money in a fight. But, Marlowe also appreciated that sometimes brain over brawn was the way to get information he needed. The above quote is from a scene where Marlowe suspects a rare book shop may be a front for something shady. Rather than barge in and demand answers, he does his research and questions the sales clerk about first editions he knows don’t exist. The clerk is oblivious, and without revealing that he’s on to them, the clever detective gets all the information he needs.

Marlowe also kept his mind sharp by constantly playing chess. He’d use this manly game of strategy and skill to relax and think through problems. Like Sherlock Holmes and his violin, Philip Marlowe pursued an edifying hobby in his downtime, rather than wasting it.

There are numerous examples of great men and leaders who embodied the merits of lifelong learning and expanding your mind. You never know where that knowledge you acquire through autodidactic education could pay off down the road.

Work With What You’ve Got

“I needed a drink, I needed a lot of life insurance, I needed a vacation, I needed a home in the country. What I had was a coat, a hat and a gun. I put them on and went out of the room.” —Farewell, My Lovely

Similar to “shoulding” all over ourselves,” we often “if” ourselves out of getting a job done or even starting an important task in the first place. You know how it goes: “If only I had two more hours to spare, I could get a workout in.” Or, “If I had more money, I could spend more time investing in side hustles instead of having to work this awful job.” We constantly find the magic “if” that stops us from pursuing something important. Marlowe didn’t have the luxury to “if” himself.

In most of the cases he took, there was usually someone in danger and he had to work fast to make sure the right people were safe and the guilty parties got what was coming to them. Were Marlowe to stop and say “If I had backup, I could brace this guy,” or “If I were stronger, I’d stop that guy from harassing women,” then he wouldn’t be worth the paper his stories are printed on.

Instead of stopping to think about what he didn’t have, Marlowe worked with what he did have right in front of him. Sometimes, all he had on the bad guy was the element of surprise. Other times, he didn’t even have that. But in every scenario, Marlowe rolled with the punches and was able to work through even the hairiest of situations.

Of course, it didn’t hurt that he could strategize and improvise thanks to all that chess playing and lifelong learning.

Will Whitson is a news producer and long-time AoM reader. He lives with is wife and daughter outside Washington D.C.