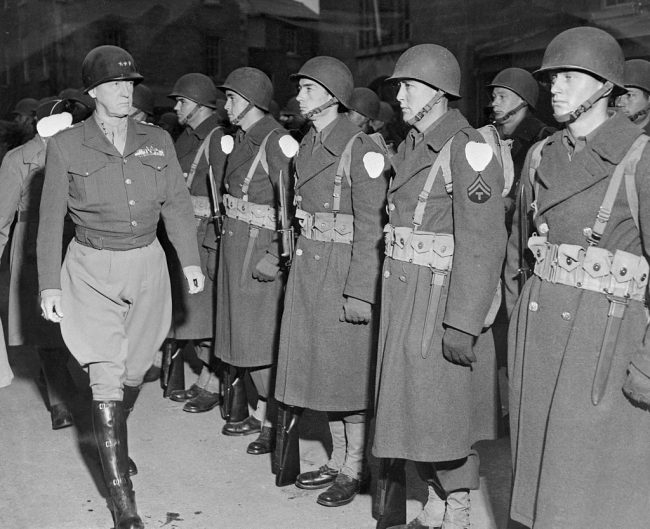 “Far too often we let little things slide. But just turn on the news and listen as the anchors lament an auto-part defect leading to deaths and multibillion-dollar recalls or a small leak in a gas pipeline causing an explosion that endangers wildlife. Recognizing when something is wrong, big or small, and holding people accountable can save industries billions and citizens their lives. Sergeant Bowen instilled in me instantly that if you do walk by a mistake, then you just set a new, lower standard.” —General Ann Dunwoody, A Higher Standard

General Ann Dunwoody was walking down the street when she saw a soldier in uniform walking with his hands in his pockets. Anyone who’s spent time in the military knows that this is a big no-no. Dunwoody could have literally walked by the mistake and not addressed it. It’s something small, it wasn’t impacting anyone at the time, and the kid probably just forgot. It wasn’t anything overtly heinous. As a general, though, she knew that if she didn’t correct the error, she would be, by the sin of omission, setting a new lower standard for that soldier. So rather than letting it slide, she approached him, kindly addressed the problem (rather than yelling at and demeaning the young guy), and reinforced the ideas of discipline and attention to detail.

Since then, General Dunwoody has used the phrase “never walk by a mistake” as one of her guiding principles. I’ve extrapolated that idea to encompass three roles of one’s life: consumer, leader/parent, and individual.

Let’s explore how the mantra plays out in each of these three areas.

Customer service mistakes and flubs have seemed to happen to me a lot lately. A wrong Starbucks order, only discovered when I got home. A medical bill that should have been covered by insurance, but was initially thrust on us because of a clerical error. A cold burger served at a restaurant.

Only the mistaken Starbucks order was corrected immediately, and the medical bill is in the process of being rectified (but only because of its high amount; a small bill may very well have been paid without further thought). The burger was unhappily consumed. And that’s usually how it goes. Consumers often choose to just live with a customer service mistake rather than correct it. This happens for two primary reasons:

1) In many cases, it requires going out of our way to fix an error. I had to drive back to Starbucks, and my wife had to spend a few hours on the phone to save a few hundred bucks. It’s sometimes just a pain in the rear to correct things. And frankly, I wouldn’t have even cared about the Starbucks order, if not for it being the culmination of a number of similar mistakes at various places around town. On a busy weekend, the last thing I want to do is get back in the car and stand in a long line for my drink to be re-made.

2) We shy away from correcting errors because we don’t want to deal with the confrontational aspect of it. In most restaurant settings, when the waiter comes by and asks how your food is, it’s basically automatic that you’ll smile and say some version of “It’s great!” Even if it’s not all that great. When you tell the truth about your service when it’s been just mediocre, there’s the initial pang of discomfort we all experience in the face of criticism. It’s only human.

There are, however, several reasons to overcome these hindrances, and address consumer errors we encounter:

First, when we let customer service mishaps go, we’re impacting the quality of the establishment (which could have been improved had we spoken up). As, say, a barista, or at least the coffee shop owner, wouldn’t you rather know that you’ve made an error, even if it’s initially uncomfortable and embarrassing? Better to have one error immediately corrected, than to realize much later that you’ve made hundreds of unicorn sprinkle mochachinos the wrong way (or have a subpar employee on staff), and have possibly driven hundreds of customers away from your coffee shop. So, as the consumer, you’re actually doing companies a favor by speaking up about mistakes and errors.

Second, if helping a business out doesn’t feel particularly motivating, know that you’re doing a solid for your fellow man as well, decreasing the chances they’ll waste their hard-earned money on a crappy meal or experience. Mistakes are often repeated, so when we let one go, we not only have to deal with the consequence ourselves, we affect the customers in line behind us who are likely to encounter the same problems until someone with a bit more chutzpah speaks up about it.

Third, by refusing to pay for charges you’re not due, or products you didn’t want, you can save yourself some money. An erroneous bill may be rectified or your meal may be comped. Even when he became the wealthiest man in the world, John D. Rockefeller still pored over business invoices and bills in his personal life and would take the time to dispute erroneous charges; he never believed in knowingly wasting money, even if you had plenty to spare.

But what if correcting the mistake will cost you more time (and time = money) than the original mistake? Should you still drive back to a restaurant after getting home and realizing they forgot to include the dessert in your take-out order? You should, not only for the above reasons, but for one more: the opportunity to practice the ability to stand up for yourself and not accept something that’s lower in value than what you’ve exchanged for it.

I’d challenge you, for at least a week, to answer honestly when asked about your food or your customer service experience. Beyond that, do in fact take the time and effort to go out of your way when something has been mistaken with your order or purchase.

As any kind of leader — parent, manager, even friend — walking by mistakes makes your life, and the lives under your care, more difficult later on. Addressing mistakes that other people have made is really hard, especially when we have some sort of relationship with them (as opposed to when it’s as a consumer, where we are a little more separated). That relationship is also what makes doing so much more valuable, though.

This sentiment is especially true of small mistakes. Large mistakes — reports not sent, blown sales, blatant customer service screw-ups — are easy to address, and generally known by the person who made the mistake. Smaller mistakes though are sometimes not even on a person’s radar. A small accounting error, an important formatting problem repeatedly made in a report, a forgotten guideline about appropriate dress or conduct (as in General Dunwoody’s example at the start of the article). It’s easy to walk by these small errors because they’re just that. We think, “What’s the problem with letting a small error slip by? It’s not really affecting anything, especially in this particular instance.” We don’t want to seem anal in bringing something up, and we don’t want the person who made the error to feel bad. So, we’re apt to ignore small lapses and blunders.

But in avoiding some headaches, we create others.

The first problem with ignoring small mistakes is that they tend to repeat themselves, and often snowball into bigger ones.

Maybe you know a married friend has been texting an old flame. So far their banter has only been light and friendly, but he’s keeping it a secret from his wife, and it could easily turn into cheating. Isn’t it better you said something to your friend, before it heads down that road? Research shows that people don’t commit grievous moral lapses all at once; rather, they take small steps — each of which is rationalized in turn — until they’ve gotten themselves in too deep.

Second, if a problem isn’t addressed, the person can also come to assume that it’s not actually a mistake at all. Or perhaps the person you’re leading is aware that something is a mistake, or at least not entirely correct, but since you’ve not addressed it, they’ll think it’s some unreasonable or bureaucratic guideline that can be readily and regularly ignored.

As a manager, you might be okay with letting a certain mistake slide, but a future employer of your subordinate won’t be; you thus do a disservice to the employee by not helping them correct the error while under your mentorship.

A final problem with letting a mistake slip by unaddressed is that even if the error itself isn’t big, not addressing it weakens the person’s overall ethic of discipline and reliability.

Say your teenager is tasked with shoveling snow after a storm (as I often was). It’s possible that they forgot to take care of the sidewalk or front patio. They did the long driveway and put in plenty of work, but left one small part undone, not necessarily out of malice, but simple forgetfulness that that’s part of the chore. It’s far better to kindly address the undone task and ask that he or she go back and finish it up, than to reinforce the acceptability of leaving a job incomplete. To correct small mistakes like that creates in a child (or an employee!) a sense of paying attention to the little things, and ensuring every part is taken care of before moving on to the next thing.

General George S. Patton was an absolute stickler for little details about how his troops wore their uniforms and conducted themselves, and closely inspected the men who served under him. Though they sometimes bellyached about having to rigorously keep the regulations, the men appreciated serving in units that had the highest discipline in all things, which boosted morale and carried over into the unit’s effectiveness and efficiency in battle.

Just as in addressing consumer errors, when correcting the mistakes of those for whom you have responsibility, there’s no need to do so in ways that come off as angry and petty. Be civil and encouraging.

While similar to the principle of “Do It Now!”, the concept of never walking by a mistake is more about correcting oft-overlooked errors than doing chores or doodads in a timely and orderly manner. As a homeowner, this type of thing seems to happen all the time:

These are all examples from my own life, if you’re wondering. I eventually touched up the paint on the ceiling, fixing the fan wiring is on my list for this fall (I thought I wouldn’t care about the small error, but it’s been nagging at me and I just can’t let it go), and I’m pretty sure that burned-on spot on the Dutch oven is there to stay after cooking with it too long and never properly scrubbing.

Taken on their own, these things aren’t necessarily even problems. Those excuses I made did in fact have some legitimate reasoning. So what’s the issue? Frankly, it’s more about building personal discipline than anything else. Walking by mistakes in your personal life, of your own doing and that don’t much affect anyone other than yourself, sets a bad precedent of also doing it when the stakes are higher. Billions of dollars have been squandered and even lives lost by companies walking by small safety mistakes. Think it was the first time those people in power ignored a small error? Doubtful. Ignoring low-cost mistakes leads to ignoring high-cost mistakes. Remember, small choices matter!

Take General Dunwoody’s advice and never walk by a mistake in any facet of your life.