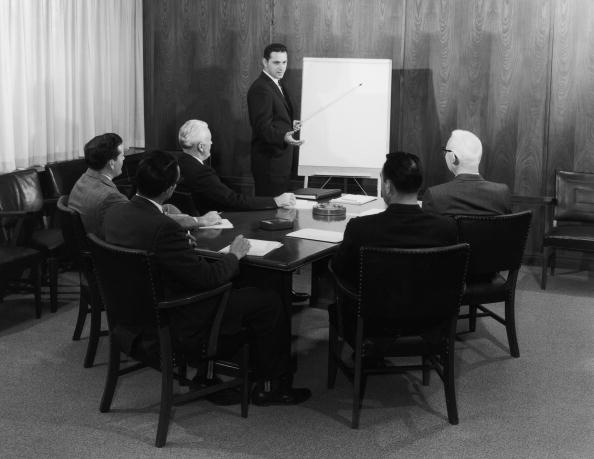 You’re a manager of a division in your company. Your team’s been facing a vexing problem for months, and you call a meeting to hash out possible solutions to it.

Positioned at the head of a table around which your subordinates are seated, you spend 15 minutes laying out the main issue.

You then share what you think is the best plan to fix it.

Because you’re a democratic manager who understands the power of getting as much input as possible from diverse viewpoints, you now open the floor to suggestions.

Your team awkwardly stares at you or furrows their brows, feigning that they’re thinking of a solution. Finally, someone speaks up, but instead of offering any new ideas, they take an idea you proposed and tweak it slightly. More awkward silence. Another person agrees with the modified idea submitted by the brave soul who piped up first.

Thirty stilted minutes later, you adjourn the meeting, frustrated at your nincompoop, yes-men employees who couldn’t even suggest a single new bold idea to solve the knotty problem with which your division is grappling. “What am I even paying these people for?” you think resentfully.

But what if the problem isn’t the people you lead? What if the problem is you and one small but crucial mistake you consistently make when leading meetings? And what if you could easily correct that mistake to start eliciting much greater engagement?

The Negative Power of Resulting

In my podcast with retired professional poker player Annie Duke, she shared a psychological bias that’s very common but can be disastrous to poker players (and the rest of us as well). It’s called “resulting,” and it’s when you judge the quality of a decision by its outcome. It’s a narrative fallacy: a decision can be good but still garner a bad result, because other circumstances, like luck, are in play. For example, in poker, it’s very possible to make the best possible decisions based on the cards you’re dealt, and still lose a hand. You can also make abysmal choices, and still win, thanks to luck.

Focusing on outcomes can affect your decision-making process in a negative way; as Duke told me, “it just ends up distorting everything. It’s like a huge gravity well on your decision analysis . . . It’s like putting blinders on. You can’t see past it.” This faulty thinking plays out in a couple ways.

After you’ve made a decision, if you base its quality or “rightness” solely on its outcome, then you might misjudge what was in fact a good decision that simply turned out poorly due to luck. You may hesitate to continue making the same kinds of decisions based on this short-term loss, this single toss of the coin, when in the long-term, over the course of many tosses, it would actually be to your advantage to do so.

But resulting also negatively impacts the process of making that initial decision in the first place. If in preparing to make a decision, you already feel 100% certain that you know the best possible outcome, then you’ll stop looking for alternative information and options, and, sensing that your mind is made up, other people will be unlikely to share contrarian opinions with you. You end up moving on an overly narrow, single-track course towards what you think is the desired result.

For this reason, Duke, argues, “what we actually want to do is be analyzing our decisions in absence of outcomes as much as possible.”

Why Resulting Ruins Your Meetings and How to Avoid This Mistake

So, what does all this have to do with running a meeting?

Well, as Duke explains, “the best way to avoid resulting is to not know the result.”

But that result is exactly what you telegraph when you offer what you think is the best possible solution to a problem, before soliciting your team’s feedback. By sharing your opinion first, you create a result in their heads. You give them the outcome.

Once this occurs, Duke says, a couple things happen:

Number two — when they state things with certainty, people in the room are much, much less likely to share information that might be contrary to whatever the opinion that’s been expressed is and there’s two reasons why they might not do that. One is that they might feel like they’re wrong. If they’re not 100% certain of their own beliefs, if they have any uncertainty themselves, if they think maybe we should be going a different way, but I’m only 40% on that, they’re not going to speak up for fear that it’s going to be, ‘You’re wrong,’ or ‘You’re disagreeable.’ . . . Or they’re afraid of telling the leader that they’re wrong. They’re afraid of saying, ‘No, I don’t agree with you.’ That they’re going to get in trouble for that and so they tend to keep their mouth shut.

In other words, once you set the outcome, your subordinates are going to judge whether their own ideas are right or wrong, or good or bad, based on how much they align with yours. They won’t feel comfortable sharing ideas that don’t jive with yours, their thinking will default to the parameters you’ve already set, and at most, they’ll just says things that slightly modify what you already proposed.

Leaders tend to set definitive outcomes like this, Duke says, because “a lot of people think, ‘Well, in order to really be believable to my team, in order for them to believe that I have the right to be leading them, I need to be expressing things so certainly.’”

But in fact, people don’t always expect or even desire that leaders be sure about everything. On the contrary, they will appreciate being able to express their opinions and ideas in an open atmosphere.

So when you’re leading meetings in which you hope to solicit engagement and feedback, follow this simple rule: Do not share your opinion on possible solutions before asking for input from your team.

Simply state what the problem is and then open the floor up to suggestions. By not throwing out your suggestions at the start, you avoid the pitfalls that come with resulting and outcome bias. Team members will be more likely to think outside the box and not just within the confines of your preset opinions. And since you haven’t yet said what you think, there’s less anxiety about saying something that makes the boss look dumb in front of everyone.

If you notice people are still hesitant to engage, you can say something like “I don’t have any set opinions on this, folks, so please don’t hesitate to throw out your craziest ideas.” Encourage people to think in terms of probabilities — “Even if you’re just 40% sure of something, share that idea anyway.”

Try rectifying this common mistake at the next meeting you lead. You’ll be surprised by how much more engagement you’ll receive.

For more on making better decisions, both in business and in life, as well as the advantages of thinking in probabilities, listen to my whole podcast with Annie Duke: