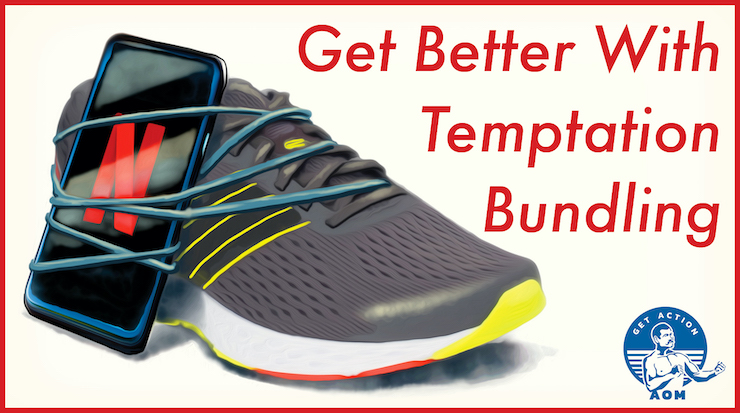 Fortunately, there’s a way out of this fruitless cycle. A technique for making our habits happen, and doing so with less effort and more pleasure: bundling our temptations.

A Primer on Temptation Bundling

if people focused on making long-term goal pursuit more enjoyable in the short-term . . . they’d be far more successful. —Katy Milkman, How to Change

It’s not so hard to understand the reason we struggle so mightily to follow through with our good intentions: The things we aim to complete are often not enjoyable or rewarding to do in the short-term. Things like going to the post office, washing the dishes, and doing taxes have a long-term payoff, but simply aren’t pleasurable in the moment. Ditto with cooking and exercise, at least for some people. So, when it comes to choosing to do these tiresome tasks, or, choosing to do something that’s more immediately satisfying — scrolling through social media, watching television, ordering takeout — our pleasure-seeking selves choose the latter over the former more often than not.

Once you understand this obvious problem, the solution also becomes obvious — though you may not have ever really thought through it before: make working on your goals more rewarding.

You can’t do this by changing the nature of the task itself, which, as we’ve already said, is inherently unpleasurable. But, you can add enjoyment to the task by pairing it with something that is pleasurable.

For example, Milkman used to have a hard time getting herself out the door to go to the gym. To motivate herself, she started listening to Alex Cross detective novels — a guilty pleasure — while working out. What used to seem like a chore — logging miles on the treadmill — became something she really looked forward to.

I don’t enjoy running errands around town — Amazon returns, grocery shopping, you know the drill — when there are a million other things I could be doing. To be a little more pumped up about it, I only listen to Halsey while putzing around in the minivan. (She slaps, guys!)

Find it hard to get motivated to fold the laundry? Listen to a podcast while you do it. Want to eat more homemade meals, but don’t enjoy cooking? Crack open a particular beer or wine while you chop and saute to make the process more pleasurable.

By coupling a rewarding “guilty pleasure” with a tedious-but-important goal/habit/task, you’ll be far more likely to follow through with it.

Getting the Most Out of Temptation Bundling

This small act of neurological trickery is not a panacea. There are a couple keys to making it work for you, as well as limitations to keep in mind.

Only do the particular “vice” when you’re doing the non-pleasurable task. In How to Change, Katy Milkman writes that “temptation bundling certainly works best if you can actually restrict an indulgence to whenever you’re doing a task that requires an extra boost of motivation.” You’ll be much more motivated to tackle something when it’s the only way to access a certain reward. Want to listen to Alex Cross? You have to get on the treadmill. Want to listen to Halsey? You’ve got to get in the minivan.

Keep one of the things you’re bundling somewhat passive in nature. Milkman writes, “not all activities can be bundled with one another. . . . In general, a cognitively demanding task can’t easily be paired with another cognitively demanding task.” Say you love crossword puzzles. You try to bundle puzzles with working out — maybe you can get a few clues solved on the stairmaster or between sets? Think again — you’re going to have a hard time focusing on either thing. In most cases, it’s the pleasurable thing that needs to be somewhat passive: the cheap thrill of your favorite Netflix series, something fun to eat or drink, music you really enjoy. The options are somewhat limited.

Make it social! If you can get other people on board with temptation bundling, it can become even more enjoyable. Have a favorite coffee shop in town? Convince your buddy to only grab coffee there after a run with you. Have a bunch of random life admin stuff to do — school announcements to look over, gifts to buy online, etc.? Have a “life admin study hall.” Create a nostalgia-filled playlist or pick a nice bottle of wine that you only indulge in during these collective study halls. If you’re not careful, you might come to look forward to budgeting and inbox clean-ups!

Know that it doesn’t work forever. In her research, Milkman found that the peak benefits of temptation bundling lasted for about seven weeks. Beyond that, you get a little too used to the pleasurable half of the bundling for it to continue offering a strong motivational pull. Luckily, by that point, you’ve either built up the habit well enough to keep it going or you’ve come to enjoy it enough to keep going with either a smaller amount of bundled motivation or perhaps none at all; over time, we often come to intrinsically like things we initially didn’t enjoy. Temptation bundling works effectively to provide the momentum to get a new habit rolling until it becomes self-sustaining.

Also, it’s not that the tactic stops working entirely after the initial two-month-period expires — the boost just isn’t as potent as in those early weeks. To be sure, Milkman still enjoys Alex Cross at the gym; she just doesn’t need that boost to get out the door like she used to.

We certainly haven’t covered all the ideas here for temptation bundling. Though the possibilities are not endless, there’s plenty of room for creativity within these bounds. Take a look at the positive habits you’re struggling to get going, then take a look at some of the small but pleasurable things you enjoy, and figure out a way to bundle them together in order to better yourself and have some fun along the way.

Be sure to check out our podcast with Katy for even more concrete tips on how to change and better your life: