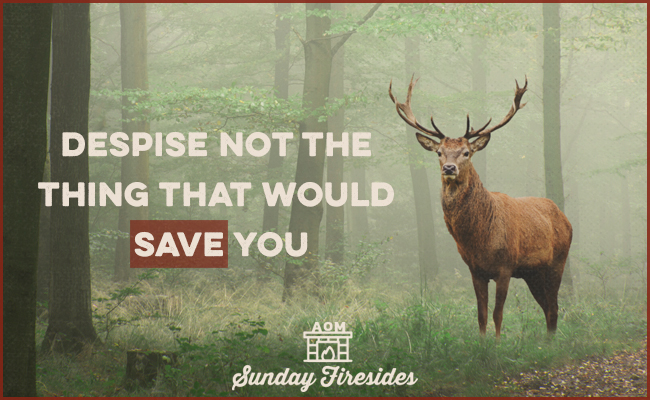 In the heat of the afternoon, a stag stopped at a pool in the woods to drink. Seeing his reflection in its still waters, he took a moment to survey himself from head to foot. He admiringly appraised the shape and size of his noble, wide-spreading antlers. Yet he looked with disapproval upon his legs, which to him seemed shamefully spindly and weak — an altogether unbefitting base to bear such a glorious crown.

At that very moment, the stag heard a hunter coming up behind him. He took off at a run, his nimble legs quickly carrying him safely away from his pursuer.

The moral of this modified spin on an old Aesop’s fable? Despise not the thing that would save you.

We often bemoan the seeming weaknesses of our personal make-up, contrasting them unfavorably with our best, most winning qualities. What we fail to realize, is that both the obviously advantageous, and the seemingly not, are a package deal.

You don’t get one personal trait without the other; they’re two poles of the same wavelength of energy, two parts of the same animal, the same, let’s call it, inner stag. Thus, it’s no use celebrating the more admirable and rueing the less. Each, the beautiful and ungainly alike, possesses salvific power.

This is, of course, simply the corollary to a previously discussed principle in which you ought to tolerate your loved one’s flaws as being the flip side of their virtues. One should work to accept both sides of the coin of personality in others . . .  as well as in yourself.

For the things we like least about ourselves, are often the very things which preserve us.