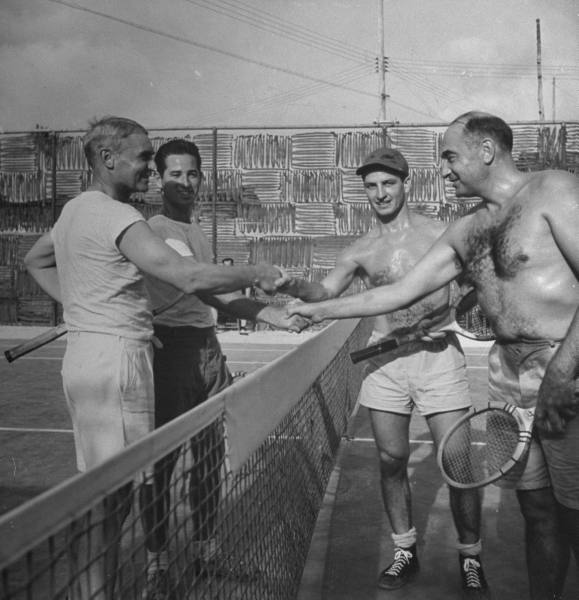 There’s a reason so many motivational speakers use sports as a metaphor for life. There are innumerable  parallels between what it takes to be successful both in real life and on the playing field. The qualities of determination, skill, and hard work contribute to a man’s chance of winning in both arenas. There is a parallel between life and sports that doesn’t get enough attention, however, and that’s the connection between a man’s character off the field and his good sportsmanship on it.

Good sportsmanship encompasses many aspects of a man’s character, the most fundamental being respect. The good sportsman respects both his teammates and his opponents as equals. He plays with integrity. A win that does not come fairly holds no satisfaction for him. He is honest in his dealings with opponents, because he treats them the way he wants to be treated. He is unselfish in his desire to see all his teammates participate and enjoy the game. He is humble in his victories, and has the proper perspective on his losses. In short, the qualities that go in to making a good man are the same ones that contribute to being a great sportsman.

Unfortunately, as men’s character off the field has declined, so has their behavior on it. Men pout and even cry when they lose, they gloat when they win, and they take sports far too seriously. A man should understand that good sportsmanship truly enhances the experience of both playing and watching sports. Players feel encouraged by one another and take satisfaction in the fact that the game was played fairly. And fans can really enjoy themselves at the games.

As both a player and a fan, I’ve noticed that men could really use some brushing up on the rules of good sportsmanship. So here’s a primer.

Good Sportsmanship as a Player

Play fair. Sounds simple, but you’d be surprised how many men will cheat or play dirty to win.  Remember, it’s just a game. There’s no need to stoop to dishonesty to win something as inconsequential as beer league softball game. If you cheat, you may get the victory in the short term, but it will forever ring hollow for you.

Be a team player. If you’re playing a team sport, do your best to get the whole team involved. Don’t try to be the star by hogging the ball. I know this can be hard when your talent surpasses that of your teammates, and you know you could win the game by carrying the whole thing on your shoulders. But selfish game play ruins the fun for everyone else and just makes you look like a jerk. What it comes down to is this: why are you playing this game? Is it for a win to help boost your sense of self-worth? Or is it for the pure love of playing itself? When it’s the latter, you naturally want to make sure your teammates have the same great time that you do.

So make a conscious effort to involve the beginner/poorly skilled players on your team as much as you can. Sure, they might flub the play, and they might even cost you the game. But in the long run it’s better for them and your team. The only way they’re going to get better is if they get plenty of playing time. By leaving them out, you’re denying them an opportunity to improve. And being a selfish player will breed resentment and divisiveness on your team. Have some patience and pass the ball to the rookie.

Stay positive. It’s easy to get negative when things aren’t going your way. A man knows how to stay positive when the chips are against him and his team. Even if a teammate royally screws up, keep positive. Berating him doesn’t accomplish anything besides making him feel worse than he already does. Instead, slap the guy on the back, tell him to shake it off, offer some advice, and let him know some of the things he’s doing right.

Oftentimes, the guy who moans and groans about other players’ mistakes is making plenty of blunders himself. Just remember: you’re not perfect either. Get over it.

Keep trash talk to a minimum. One thing I’ve noticed is that the player who continually runs his mouth with trash talk is usually the player that isn’t actually doing much physically to help his team win. I guess it’s their way of making up for their lack of skill. Instead of wasting your energy and focus on running your mouth, concentrate on actually outplaying your opponent. Let your performance speak for itself.

Also, throughout the game, make a conscious effort to give credit to an opposing player when they make a good play. A simple “nice job” or “good work” is all that is needed.

Lose gracefully. In any sport, there will be winners and losers. And sometimes you’re going to be on the losing side of the equation. The sooner you accept this fact, the easier it will be to handle a loss.  When you lose, don’t sulk, throw a temper tantrum, or cry like a little boy. Be a man and give the other team a congratulatory handshake.

Also, don’t blame your other teammates or the officiating, either. Show some leadership after the game by rounding up your team and offering them a pep talk. Point out what people did well, but also what needs to be worked on. That’s much more constructive than telling your first baseman that he sucks balls.

Finally, remember to keep things in perspective. It’s just a stinkin’ game. In the grand scheme of things, it’s not going to make much of a difference in your life if you win or lose a pickup basketball game. The sun will still rise, your wife and dog will still love you, and you’ll still have to pay the bills. So why let a loss bring you down and put you in a funk for the rest of the day?

Win with class. If you find yourself in the winner’s circle, remember to show some class. Don’t gloat or put down the other team after your win. Let your performance speak for itself.  After the game, make sure to tell the other team “good game.” Offer some compliments to the opposing players.

Respect the rulings of officials. If your game has referees, remember to respect their rulings, even if they make a bad call. They’re human beings and are bound to make mistakes. While it’s fine to contest a ruling, make your case calmly and rationally. If they decide to stand by their ruling, accept it, and move on. Remember, sometimes bad calls go your way, too.

And for your viewing pleasure, we dug up this old educational video from 1950 about good sportsmanship. Yeah, it’s a little hokey and it’s geared towards teenage boys, but I think it does a good job explaining the importance of developing good sportsmanship:

Good Sportsmanship as a Fan

A recent study by the NCAA showed that while sportsmanship among players has improved over the years, sportsmanship by the fans has gotten worse. It’s pretty sad when the people who have the least invested in a sport stoop to inappropriate behavior just for the sake of rooting their team on. Here’s a quick reminder of some things to keep in mind next time you’re at the big game.

Watch your alcohol intake. Most displays of bad sportsmanship from fans could be eliminated if fans would just drink responsibly. Know what you can handle before you start to lose your inhibitions and get unruly. Besides, it’s hard to really appreciate a game if you’re completely tanked.

Respect the opposing team. Use your lung strength to root for your team and not against the other. When the visiting team walks out on to the field, don’t be a cad and boo them. Instead, respectfully clap for them. Applause is also appropriate when an opposing player is taken out of the game due to an injury. Finally, while it’s tempting to taunt and heckle an opposing team, be the better man and avoid it. It just brings the game down.

Respect your fellow fans. Tickets to major league and college sports games cost big bucks. For many people, they are a splurge, something they buy in the hopes of having a great experience. Don’t ruin it for them by running your mouth the whole game. Nobody likes to sit next to the guy who loudly gives his armchair perspective about what went wrong with each play and how the coach is a moron. It grates on the nerves. Also, be respectful to fans who are rooting for the opposing team. Their allegiance to a set of guys wearing different uniforms and playing a game does not mark them as arch enemies or make them less human. Don’t give opposing fans dirty looks or hurl crass insults in their direction.

Watch your language. I’m always amazed at what comes out of the mouths of fans at sporting events. It would make the saltiest of sailors blush. While I can understand an exasperated “damnit” being uttered from time to time, there’s no excuse for a fan’s language to devolve into lurid and filthy talk. Remember, at most sporting events there are children, so adjust your language accordingly. And besides, if the rules demand that the athletes keep their language clean, we should expect that from the fans, too.

Respect the officials. Just as players should respect the officials, so should the fans. I’ve been to sporting events where the refs are booed as soon as they walk out on to the field-before they’ve even made a call! Give the officials the respect they deserve. If it weren’t for them, you wouldn’t be able to enjoy the game. Sure, they all make boneheaded decisions from time to time. But guess what? We do too. Imagine what it would feel like if every time you made a bad decision at work, some jerk was there telling you to go kill yourself or saying some ungodly thing about your family. Not very cool, huh?

When you’re feeling angry at the ref, take a minute to get some perspective on the situation. You may be able to see the whole field of action from your perch in the stands and see the replay in slow-mo on the jumbotron, but the ref is out there at eye level watching the action happen in the blink of an eye. It’s not an easy job, and they’re doing the best can.

Support your team, even when they lose. A true fan sticks with their team through good times and bad. It’s a sad sight to see the bleachers empty at a stadium 10 minutes before a game is over just because the home team is losing. Stick around until the end and root your team off the field.