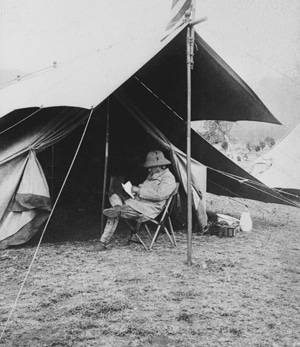 TR: A Man of Action. A Man of Contemplation.

From time to time, readers will email me an article they’ve read that argues a point contrary to the message of the Art of Manliness and suggest that I respond to it. I have typically declined because I am of the idea that it’s better to act than to react and that the best thing to do is to keep on doing my thing, because the cream will simply rise to the top. And I don’t see the point in giving misguided opinions greater exposure.

But today I’d like to break that rule. Because a reader pointed out an article that addresses an issue I’ve seen pop up in comments here, and is something men might be wondering about. The article in question is entitled, “Male Identity,” and was published on Askmen.com. I don’t have a high opinion of that website–as I’ve stated before, those kinds of shallow men’s magazines are what prompted me to start the Art of Manliness in the first place. So the article itself really doesn’t warrant a response, but it will serve very well as an excellent jumping off point to explore an important issue.

The author, Ian Lang, begins the article by taking a swipe at the Art of Manliness, goes on to lament our culture’s preoccupation with being a man, and concludes by arguing that “real men” don’t worry about what it means to be a man.

There’s plenty to find fault with in the article from the author’s cherry picking of AoM articles, to his assertion that straight razor shaving is more expensive than using modern razors, to the irony of his criticism of male lifestyle websites on the biggest male lifestyle site on the web.

But today I just want to focus on these assertions:

“Finally, do you think your dad would enjoy lying in a field with you making daisy chains and contemplating what it means to be a man? No. He would tell you to work hard, that life doesn’t ever get easier and to stop being such a pussy.”

” To paraphrase perhaps the best teacher I ever had in school, you know you’re a man when you stop trying to prove that you are.”

“Real men don’t waste time worrying about it. Real men get on with their lives, whatever their lives may be…They don’t stop and ask what it means to be a man because they’re too busy being one for that kind of self-referential bullshit.”

Is Manhood Born or Made?

Lang’s argument is not uncommon—and should be expected from a generation that often eschews work and free choice in favor of a “born this way” ethic. But the assertion that a man just is only makes sense if you are ignorant of the historical record and/or believe that manhood is something that you exit the womb with or magically absorb through the ether as you grow up. Those who don’t come out of the womb endowed with manliness and a furry baby chest are thus lost causes.

But while you can be born genetically male, manliness is something that must be learned, earned, and proved.

While Lang paints the picture that our modern preoccupation with what it means to be a man and the desire to prove our manhood is a modern phenomenon, it’s actually a very ancient tradition. The desire to prove one’s manhood has been the driving force of males since our caveman days. And many of history’s greatest men not only pondered what it meant to be a man, but studied the question deeply throughout their lives. Teddy Roosevelt’s insecurity about and desire to prove his manhood is what drove him to preach the doctrine of the strenuous life and accomplish a lifetime of amazing feats.

Being preoccupied with what it means to be a man is not the aberration–the idea that men simply are and should just get on with it is the modern invention. It is a concept that flies in the face of thousands of years of tradition. In fact, I’d argue that Lang’s position–that real men don’t worry about what it means to be a man–is one of the biggest contributing factors to the sad state of many young Western men today.

Manliness Can Be Taught. And It Must Be.


“Anyone who has practiced what is good is ashamed to turn out badly. Manliness is teachable.” -Euripides, 423 BC

As we’ve highlighted countless times on the site, in almost every culture, in almost every time, societies have spent a great deal of time “worrying” about what it means to be a man. For thousands of years, men around the world had rites of passages that initiated them into manhood. Elders would take young men underneath their wings to ensure that they were properly taught how to perform the duties and responsibilities of a man. And once boys became men, maintaining their manhood was a lifelong preoccupation.

Without any clear guidance on what it means to be man, we shouldn’t be surprised that we have so many young men today coasting along in life stuck between adolescence and adulthood without any direction. That’s what you get when you don’t take the time to contemplate and study what it means to be a man.

One of the most important things that our ancestors understood, and we have forgotten, is that left to our own devices, humans will take the path of least resistance. Every time. In life we are constantly swimming against a great current–once we stop making an effort, the current pushes us downstream. Real life long-distance swimmers must consume a great deal of calories to fuel their progress. We too need fuel to drive our manliness–we must constantly be filling our tank with the best advice out there, writings from websites and books, advice from friends and family, to fuel our actions.

A Man of Contemplation, A Man of Action

It is truly a false dichotomy to say that “real men” don’t need to spend time thinking about manhood and that they should just get busy being men.

This is a very American idea of manliness, gleaned from cowboy and action movies–shoot first now and ask questions later. But if you’re a broader student of history and culture, you know that far from being mutually exclusive, contemplation and action go hand in hand.

No one would say to someone who wishes to be a scientist, “No need for studying–just get in the lab and do something!” The scientist must first study the basic principles of his field and then experiment, and then make discoveries. It is no different for manliness.

It is easy to point at our grandfathers and fathers, as Lang does, and say, “They were men and they didn’t worry about being men.” Sure, our grandfathers were men of action, but many had jobs that made them unhappy, were in unhappy marriages, didn’t know how to deal with the scars of war, and were distant and cold fathers. (And many were quite happy as well, of course!).

As far as our fathers go, many of the Baby Boomer generation worked too hard, got divorced, and failed to pass down the art of manliness to their sons. They didn’t take the time to think about what was truly important in life. How many men in our generation only wish their dad had spent some time with them “lying in a field with you making daisy chains and contemplating what it means to be a man.” Well, maybe not the daisy chain making part.

Of course it also comes down to your definition of what constitutes “a real man.” It’s true that it doesn’t take much work to look at galleries upon galleries of hot babes of the week. But if you believe that being a man means living a life of virtue and excellence and reaching your full potential, then that won’t happen without a great deal of both study and effort.

This definition also means that studying and contemplating what it means to be a man does not necessarily mean reading only books specifically about manhood, although that can be beneficial. Rather it means engaging with works, both ancient and modern, and people that can teach you the virtues and practical skills you need to become the best man you can be. This covers a wide spectrum of subjects!

Is Manliness a Fad?

I do agree with Lang on a few things, mainly that the glut of hand-wringing articles about what is wrong with men is getting beyond tiresome and the commodification of manliness, and the resulting spate of man-focused products is unfortunate. We did just fine before the advent of bodywash designed just for us.

But the real danger in this resurgence of interest in manliness is not that it’s making men wimpy as Lang argues–quite the opposite as we’ve just discussed. Rather, the danger is that manliness will come to be seen as just another passing trend, like metrosexuality. There are books and tv shows coming out on the theme, endless newspaper and magazine articles, and social commentary galore. I fear that people will get tired of all the media attention, which will prompt a backlash, and an inevitable swing back in the other direction, back to where men don’t give a damn about being the best men they can be.

The return to true manliness advocated by AoM is not a trend or a fad, it is an effort to close the gap created during the past few decades and once again grasp the ancient tradition of manhood. One in which men contemplated what it meant to be a man and took action to attain that ideal.