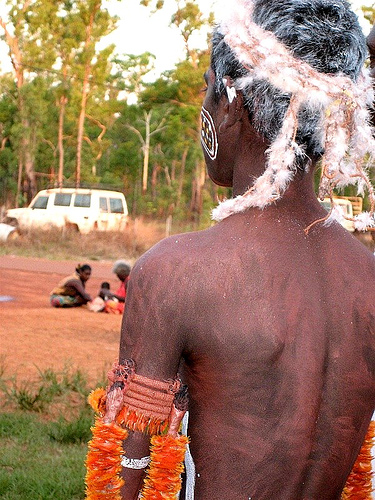 The elders of the tribe stood in front of the hut and beckoned for the young man to come out and begin the festivities of the special day. The young man had barely slept the night before, anxiously anticipating the tests he would soon be called to endure. As he rose to meet the elder, he was aware of a great gnawing in his stomach; he had had nothing to eat for the last three days as he purged his body of impurities.

The ceremony soon began. The elders of tribe pierced his chest, shoulder, and back muscles with large wooden splints. Ropes, which extended from the roof of the hut, were then attached to the splints, and the young man was winched up into the air, his whole body weight suspended from the ropes. Agonizing pain coursed through the young man’s body, but he gritted his teeth and tried not to cry out. While hanging in the air, more splints were hammered through his arms and legs. Skulls of his dead grandfather and other ancestors were placed on the ends of the splints. All the while, the young man cried aloud to the Great Spirit for courage to endure. Eventually, the young man fainted from the loss of blood and the sheer pain of the torture. When the elders were sure he was unconscious, he was lowered down and the ropes were removed. Yet the splints were left in place. When the young man recovered consciousness, he offered his left pinky to the tribal elders to be sacrificed. He placed his finger on a block and had it swiftly chopped off. This was a gift to the gods and would enable the young man to become a powerful hunter. Finally, the young man ran inside a ring where his fellow villagers had gathered. As he ran, the villagers reached out and grabbed the still embedded splints, ripping them free. The splints weren’t allowed to be pulled out way they had been hammered in, but had to be torn out in the opposite direction, causing the young man even greater pain and worse wounds. This concluded the day’s ceremony.

The young man was exhausted and bloodied, but euphoric. He had been beyond glad to participate in the ritual. This was the greatest day of his life; today he was a man.

While the coming of age ceremony of the Mandan tribe is a particularly gruesome example, peoples and cultures from prehistoric times onward created rites of passage to initiate boys into manhood. Today, such rites of passage are almost extinct. Boys lack clear markers on their journey to becoming a man. If you ask them when the transition occurs, you will get a variety of answers: “”When you get a car,” “When you graduate from college,” “When you get a real job,” “When you lose your virginity,” “When you get married, “When you have a kid,” and so on. The problem with many of these traditional rites of passage is that they have been put off further and further in a young man’s life. 50 years ago the average age an American man started a family was 22. Today, men (for ill or good) are getting married and having kids later in life. With these traditional rites of passage increasingly being delayed, many men are left feeling stuck between boyhood and manhood. College? Fewer men are graduating. And many that do “boomerang” back home again, spending another few years figuring out what the next step in their life should be. As traditional rites of passage have become fuzzier, young men are plagued with a sense of being adrift.

What Is a Rite of Passage


Sociologists have identified three phases that constitute a proper rite of passage: separation, transition, and re-incorporation.

Separation: During this phase an initiate is separated in some way from his former life. In the case of the Mandan tribe, the young man was isolated from the village in a hut for three days. In other tribes, boys’ heads were shaved and they were ritually bathed and/or tattooed. In a more modern example, when a man has just enlisted in the military, he is sent away to boot camp. His former possessions are put aside, his head is shaved, and he is given a uniform to wear. During the separation phase, part of the old self is extinguished as the initiate prepares to create a new identity.

Transition: During this phase, the initiate is between worlds-no longer part of his old life but not yet fully inducted into his new one. He is taught the knowledge needed to become a full-fledged member of that group. And he is called upon to pass tests that show he is ready for the leap. In tribal societies, the elders would impart to the initiate what it meant to be a man and how the boy was to conduct himself once he had become one. The initiate would then participate in ritual ceremonies which often involved pain and endurance. In the case of the new soldier, he is yelled at, prodded, exercised, and disciplined to prepare him to receive a rank and title.

Re-incorporation. In this phase, the initiate, having passed the tests necessary and proving himself worthy, is re-introduced into his community, which recognizes and honors his new status within the group. For tribal societies, this meant a village-wide feast and celebration. The boy would now be recognized by all tribe members as a man and allowed to participate in the activities and responsibilities that status conferred. For the soldier, his boot camp experience would come to an end and both his superiors and his family would join in a ceremony to recognize his new status as a full-fledged member of the military.

During the all phases of the process, the men who have gone through the ritual themselves guide the young initiate on his journey. By controlling the rite of passage, the men decide when a boy becomes a man.

The greatest difficulty in establishing rites of passage today is recreating the “re-incorporation” phase of the process. Today boys are rarely an integral part of any larger community, much less one that recognizes and agrees on certain rites of passage. But they can be reconfigured for the modern age and still act as meaningful transition points in a boy’s life. Rites of passage should serve as a catalyst that propels a boy’s passage into manhood.

When Should The Rite of Passage Occur?

Before deciding what the rite of passage will be, you’ll first need to decide at which age your son should take part it in it. In some tribal cultures, boys as young as eight go through rites of passage and come out as men in their community. Burdening an eight year old with the full responsibilities of manhood probably won’t work in most Western societies. A good time to take your son through a rite of passage into manhood is after they graduate high school. By then, they’re about 18 years old, the age at which society legally deems them an adult. And they are about to begin a new chapter in their lives. A rite of passage should help them navigate the path they’ll be heading down.

Creating Rites of Passage in Your Religious Community 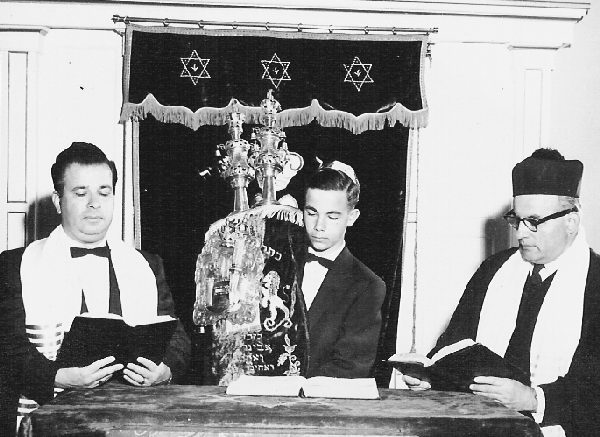 Some of the few rites of passage that are still widely recognized occur within religious organizations. Whether a young man is confirmed into the Catholic Church, baptized into his evangelical congregation, or celebrates his bar mitzvah, churches still provide the kind of community recognition that makes a rite of passage possible.

Yet, while these rites of passage are often already in place, they can be helped along by families and fathers. These ceremonies can either be a big deal, a ceremony in which a boy truly feels like he is transitioning into manhood, or they can be just another ho-hum affair-another thing he is “supposed” to do and takes part in simply because his family expects him to. A dad can make sure it’s the former by preparing his son for quite awhile before the actual ceremony occurs. Ideally, you should be talking with your son from the time he is a little tyke about what it means to become a man in your faith tradition and how to prepare himself for his future rite of passage. As the time draws closer, schedule weekly events in which you discuss the principles of your faith, your personal views on weighty matters, and your advice on being a man of faith. Let you son know how important you view the rite of passage and impress upon him the solemnity of the occasion. Set a weekly tradition such as a father/son scripture study that will countdown the time until his rite of passage is to occur.

Creating a Rite of Passage in Your Family 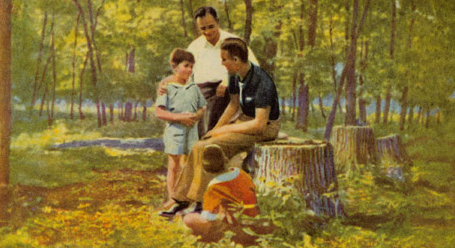 One needs not be a member of a religious community to undergo a rite of passage into manhood. A family is a very small community unto itself, and parents may create unique familial ceremonies in which sons are inducted into manhood. The options for such a ceremony are limited only by your creativity. Consider drawing up a list of tasks your son must learn to perform himself. When he has mastered all of these skills, throw him a celebration in which you present him with a medallion of some sort to commemorate the occasion. Or take him on a long backpacking trip in which he is responsible for making the fire, setting up camp, navigating, cooking food, ect. Along the way impart all the manly wisdom you have gleaned from life experience. Or you might want to take an extended father/son road trip. To increase the “separation” required of a rite of passage, consider sending your son on a service trip to a foreign country or on a trip guided by an organization like Outward Bound. Enrolling your son in Boy Scouts is another great option. The Scouts have built in “rites of passage” that increase boys’ skills, ,responsibilities, and feelings of competence. Whichever avenue you choose, the important thing is to imbue the process with great significance. Don’t be cheesy about it, be sincere. And treat your son differently when the process is complete, giving him both greater respect and greater responsibility.

Creating a Personal Rite of Passage 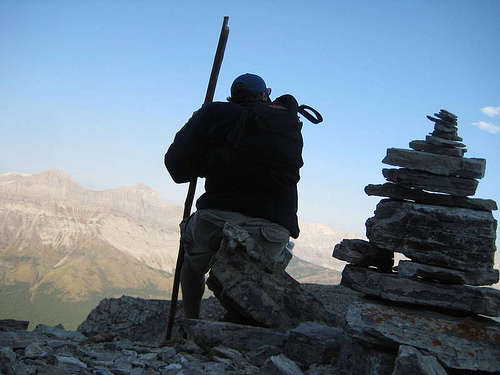 Some of you may have missed out on the opportunity to take part in some sort of rite of passage and may feel a bit adrift, in limbo between boyhood and manhood. Do not despair. You can create a personal rite of passage for yourself. While the “re-introduction” phase may not be as significant in this case, you can reenter your community knowing inside yourself that you are a changed man. Draw up a list of goals, head out into the wilderness, take a mission trip, join Americorps or Peace Corps, join the military, pledge a worthy college fraternity or a fraternal lodge….it doesn’t matter as long as you commit to it with the idea that you’re going to give the experience everything you have and allow it to help you transition into manhood.

Now it’s your turn. Please share with us the rites of passage you went through that marked your passage from boyhood to manhood. Do you have any other ideas for rites of passages for boys today? Drop a line in the comment box and share your thoughts.