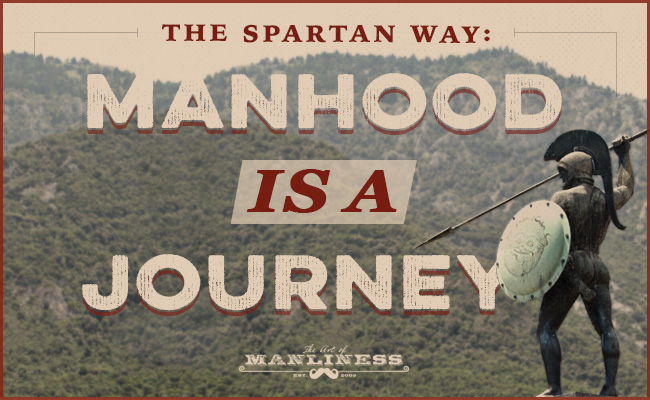 In all cultures and times, a male was not automatically considered a man, but rather had to earn that title by passing through rites of passage and their attendant challenges and tests. Manhood was gained through a step-by-step process, in which a boy progressively gained more knowledge and responsibilities, as well as privileges.

Sparta institutionalized this process in the form of the famous agoge. Meaning “a leading,” this thirteen-year physical, military, religious, and moral education trained a boy in the aptitudes, knowledge, and virtues he would need to become a man and join the Homoioi — the “Equals” or “Peers.” Only these Spartiates could become full citizens of Lacedaemon and join its elite warrior class. Only these could be considered true Spartan men.

Rites of passage all around the world are structured in three phases: the initiate is first separated from his former life in preparation for creating a new identity; he then exists in a liminal, in-between state in which he is no longer part of his old life, but not yet fully inducted into his new one, and is taught the knowledge necessary for one day entering that future state; finally, having studied, practiced, passed the necessary tests, and proven himself worthy, the graduate is re-introduced into his community, which recognizes and honors his new status within the group. The Spartan agoge included these stages both on a macro and micro level; the entirety of the thirteen-year training course was one long rite of passage that transitioned a young Spartan male from childhood to puberty to youth, and finally into manhood, while smaller passages progressed him from one age to the next.

When a Spartan boy was seven, he left his family to be schooled with boys his own age in the agoge. His novice status was marked by his shaved head, single simple cloak, and the fact that the only weapon he could bear was that of the sickle – a tool of the helots (the servile class). These new apprentices were not only instructed in physical education, but also taught reading, writing, dancing, and singing, as well as logic, rhetoric, and philosophy.

When the Spartan boy became an adolescent, his growing status was symbolized in the fact he could now grow his hair out short. His instruction in arts and academics continued, while his physical training became more intense, including participation in team sports, which enjoyed far more prevalence in Sparta than other areas of ancient Greece. Ball games and other athletics were played even in the hottest heat of the summer, in order to further the boys’ capacity for toughness and endurance.

Adolescents were broken into different age classes, which were overseen by older teachers, as well as by a peer leader the same age, and a 20-year-old recent graduate of the agoge. To move from one age class to the next, the young trainee had to pass certain tests and competitions concerning strength, courage, aptitude, endurance, and even refinement.

For young men were not only taught the conduct of men in terms of physical and martial skills, but in manners as well. As Nigel M. Kennell notes in Gymnasium of Virtue, the adolescent was introduced “to the ways of a young Spartan gentleman: to keep his hands inside his robe while in public, to walk without talking, to keep his eyes always on the ground, and never to stare.” During this phase of maturation, a young trainee might be brought in front of a table of banqueting grown men and questioned, in a sort of catechism-like style, on the values and philosophy of the Spartan way of life.

As Kennell explains, further accountability for behavior was found in the fact that veteran members of the Lacedaemonian community paid close attention to the development of its youth:

“Plutarch emphasizes that the old men of Sparta kept watch over the young, attending their workouts in the gymnasium and their games and taking note of their general comportment throughout the day. Simply by their presence, they inspired fear in those likely to transgress and reinforced the shame and the yearning for excellence which guide those inclined to be virtuous.”

Around the ages of 18-20 — the threshold of manhood — the training of the increasingly seasoned apprentice intensified and he took part in more rigorous physical exercise, hunting outings, competitions in sports and gymnastics, and mock battles using the real weapons and equipment of the Spartan warrior.

The separation phase of the agoge’s extended rite of passage intensified as well in an experience called the krupteia or krypteia — a name which derives from the word for “secret” or “hidden.” For one year, the Spartan youth had to seclude himself from the polis, living off the land in the countryside, without being seen by the general population. Unarmed and without servants, shoes, or bedding, the experience was designed to test the youth in stealth, resourcefulness, and self-reliance; it was described by Plato as a “wonderfully severe training in hardihood.” (It should be noted that the krypteia is thought by some to be the name for a select, secret force of Spartans who spied on and policed the helot population by night, or for a kind of special operations wing of the Spartan military. Other scholars however, including Kennell, who conducted one of the most extensive studies of the agoge, argues that the term krypteia only rightly applies to this year-long course in bushcraft and wilderness survival, in which all young Spartan males participated.) A test not only of skill and guerrilla-esque adeptness, but also of the ability to thrive in solitude, the krypteia was a culmination of the lessons in courage, toughness, and discipline a young man had been mastering throughout the agoge — another transition point to crown a thirteen-year series of them.

If the trainee successfully completed this challenge, and those which had come before, at age 20 he graduated from the agoge to become a full-time soldier. At this point, he was to join one of the men’s dining clubs (more on these later), in which his mentoring into manhood continued, as he nightly ate with men of different ages, with many years of wisdom and experience between them. As Paul Rahe notes in The Spartan Regime, these dining clubs “integrat[ed] him into the larger community by means of an all-male social unit of a size perfect for engaging and keeping his loyalties.”

From ages 21-30, a Spartan man served on active duty in the military. After turning 30, he transitioned to the reserves, and was expected to get married, if he hadn’t done so already, and start a family. He could now grow his hair out in the long, Lacedaemonian style, and was considered a full citizen, one of the Equals, the Peers. He had earned his place among Spartan men.

Throughout all of these phases, tests, and challenges, failure was always a possibility — a young man could flunk the agoge, and disqualify himself from joining the ranks of the Homoioi — a humiliating disgrace.

But if he proved worthy, a Spartan male not only moved chronologically and biologically from childhood, to puberty, to youth, but transformed in skill, knowledge, and confidence as he moved from plebe to warrior to citizen. Each stage and rite of passage carried symbology that indicated his current status, while imparting the instruction and mentoring that prepared him for the next, so that, when he reached the subsequent stage in his journey into manhood, he knew what was expected of him, and had no doubt he belonged.