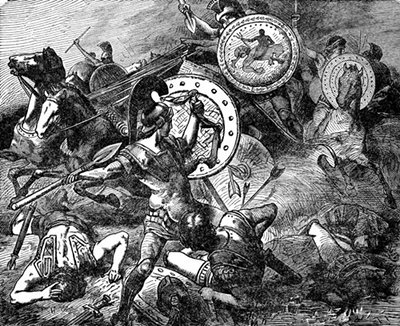 When professor of anthropology David D. Gilmore examined tribes and cultures across the world, he found striking similarities in the ideal qualities ascribed to each gender. While exceptions existed, otherwise disparate cultures proved to have much in common as it concerns gender roles.

Of particular interest was the almost universal way that cultures expected men to prove their manhood. Gilmore explains in Manhood in the Making:

“There is a constantly reoccurring notion that real manhood is different from simple anatomical maleness, that it is not a natural condition that comes about spontaneously through biological maturation but rather is a precarious or artificial state that boys must win against powerful odds. This recurrent notion that manhood is problematic, a critical threshold that boys must pass through testing, is found at all levels of sociocultural development regardless of what other alternative roles are recognized. It is found among the simplest hunters and fishermen, among peasants and sophisticated urban peoples; it is found in all continents and environments. It is found among both warrior people and those who have never killed in anger.”

From ancient times until modern, men have been insecure about their manhood in a way women by and large do not experience in regards to their womanhood. Manhood must be gained and earned, and therefore can also be lost; thus, preventing potential emasculation has forever been a male concern.

Men are told to “be a real man” to “be a man about it,” and to “man up.” To be seen as effeminate, and worst of all a “sissy” is incredibly insulting to a great number of men. To avoid these labels, a man feels he must prove his manhood to other men, showing courage and passing trials involving danger, combat, and rites-of-passage. And even after the successful completion of such challenges, one’s manhood must be continually maintained throughout life.

There are no true correlations to this male fixation for women. Women are not chided to “be a woman about it” or to “woman up.” These days, they may be rarely admonished to be more “ladylike,” but a woman acting “mannish” typically carries little stigma and may even be celebrated. And women are not required to prove their womanhood; it is seen as an inevitability of their biology.

Scarcity, Danger, and the Culture of Manhood

Why this difference between the genders? One is a difference in biology, of course. A girl’s passage into womanhood can be marked by her first menstruation and “proven” through pregnancy and childbirth. The latter particularly compels a woman to grow up.

This may partially explain the disparity, but wherein lies the origin of the pressure on men to “man up?” Dr. Gilmore argues that “the harsher the environment and the scarcer the resources, the more manhood is stressed as inspiration and goal.”

Why would this be so?

In a tribe or a society that faced issues of scarcity, where the danger of being attacked by wild animals or human enemies constantly threatened, men were needed to step up and take on the role of hunters, warriors, and protectors. Because of men’s greater physical strength and assertiveness, the lot for these jobs fell naturally to them. But while men may have some natural proclivities to embrace these roles, putting one’s self in harm’s way does not come naturally to either sex. Thus cultures needed a way to prod men into embracing roles which were undesirable but essential to the survival of the tribe.

This is where a strong “culture of manhood” came into play. In a society where manhood must be proven with tests and challenges, manhood is no longer a given; not every male can have it. Thus those who do have it have earned it, which turns manhood into a desirable, valuable, and essential part of a man’s identity and position in the tribe. Failure to live up to the standard results in a devastating loss of one’s manhood and standing with the others. Men are thus compelled to step into the gap in service of society.

We can see the flip side of this when looking at the few cultures that historically defied typical gender roles. These cultures typically had little need for hardihood and thus little need for the culture of manhood. For example, early visitors to the people of Tahiti were struck by their utter lack of differentiation between the sexes. The women held positions of leadership and power, played sports with men, and generally lived on equal footing with their male counterparts. Men and women shared in housework and jobs.  The Tahitian men spoke and acted in ways Western visitors considered effeminate and they had no desire to protect their women or to fend off foreign invaders. Gender was not even expressed grammatically in the Tahitian language.

The Tahitian lifestyle explains the development of this culture:

“Few demands are made on Tahitian men. They do not hunt. There are no dangerous or strenuous occupations that are considered masculine. There is no warfare or feuding. The colonial French administration was relatively benign, providing welfare assistance to the indigent. The local lagoon supplies plentiful fishing…Arable land is also plentiful…Domesticated animals are plentiful as well, and there is no grinding poverty or economic struggle…A laconic attitude toward work is considered ‘traditional, truly Tahitian.'”

The Tahitian men saw little difference between the genders and had no preoccupation with being manly or proving their manhood. There was no culture of manhood there, as the ease and abundance precluded the need for one.

There are two ways of thinking about this theory on the development of manhood. Some men resent the fact that men have forever been forced to place their lives in danger for the good of others and conform to a culture’s standard of manliness. But it could be also said that this standard has been beneficial to men in bringing out and refining those qualities and capacities that naturally abide in men, but would otherwise remain latent without anything to draw them out.

Manhood in a World of Ease and Luxury

Philosophers, from the ancient Greeks to the Founding Fathers, warned that luxury is a poison that weakens and emasculates men. In a world where hardihood is unnecessary, there is no need to prod men into the hunter/warrior/protector role, men do not feel compelled to “step up,” and thus the culture of manhood withers away.

We live in such a time. By and large our lives are marked by great ease and convenience. Our meat comes wrapped in plastic at the store, military service is not compulsory, and the greatest danger we face is stubbing our toe. Society isn’t sure anymore what men’s role should be now, and thus the culture of manhood is enfeebled.

It is a transitional time for the culture of manhood. The idea of proving one’s manhood has certainly not disappeared and is very much still with us. But at the same time, there are few outlets for men to be tested. There is no tribe of men to judge one worthy, no rites-of-passage, no proving grounds to make one’s stand. And thus we see a source of modern male anxiety: the ancient desire to prove one’s manhood meets with a world where opportunities to do so are practically non-existent.

Despite this anxiety, some would say that the state of ease we enjoy is a good thing as it has allowed for much greater parity between the sexes. The feminism movement happened in the 60s because it could happen then; because manufacturing jobs and heavy labor jobs had been replaced with office jobs and white collar work, jobs men and women could do equally well. And proving one’s manhood has not always been a healthy endeavor; the man of the last century sometimes sought to shore up his manhood by proving his superiority to “the other.” He was a man because he was not a black man, or a gay man, or an immigrant. Gaining one’s manhood often came at the expense of stripping another man of his.

And so some say that in this age, where we do not seem to need the hunter/warrior/protector that there isn’t much need for traditional manhood anymore, that we should redefine manliness, accept that technology has made our lives easier, that the internet is our new tool, the computer of our new fire. That men don’t need to take part in this outdated striving for manhood any longer. Yes…but…

I cannot help but think of those who called WWI the “war to end all wars.” We live a life of ease and convenience now, but who can tell what is around the corner? We can say that technology is our new tool, but what happens if that technology goes kaput? Or if all men are again compelled to fight? I think of 9/11 and the men who fearlessly charged up the stairs of those burning buildings. Perhaps there are those who see the idea of proving one’s manhood as silly…but who will be running up those stairs if a generation stops being asked to do so?

What do you think? Share your thoughts with us in the comments.