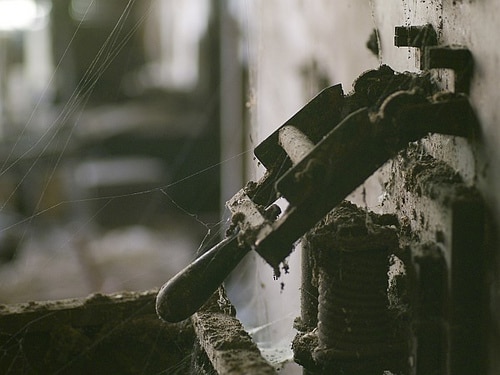 A few weeks ago, I caught the premiere of the Discovery’s Channel’s “Human Planet,” a television show about the ways people have adapted to survive in Earth’s most extreme environments. Perhaps a better name for the program would have been “Man Planet,” as the show primarily chronicled the incredible feats of men around the world–men the tentacles of civilization have barely grazed. There were men mining sulfur from an active volcano; men diving dozens of feet and holding their breath for five minutes at a time to spear fish on the ocean floor; men initiating their sons into manhood by teaching them how to train eagles to hunt.  Even seemingly pedestrian tasks like taking your kids to school were fraught with danger; a father escorted his children on a 60 mile journey through the Himalayas, watching for potential avalanches and walking over a frozen river that could have cracked open at any moment.

I was immediately taken in by the show’s spectacular cinematography. But it was the image of these men straining and sweating, risking life and limb to provide for and feed their families that really caught my attention.

And by the end of the show, a bunch of things I’ve been thinking about for awhile had coalesced together.

There has been a copious amounts of hand wringing lately about the state of modern men, about the fact that men appear to be falling behind in life and seem unmotivated and listless.

Why all this concern? The statistics are familiar to anyone who has read this genre of articles:

Plenty of theories have been offered as to what is behind these statistics. Some say the economy is to blame, as traditionally male industries have been moved off shore or gone extinct. Another reason given is that corporate culture and bureaucracy have sucked the soul out of men and taken away their manly autonomy. Others say it’s our consumer culture and the rise of particularly time-sucking hobbies like video games. And some say the root of the problem is feminism, the changing dynamic of male/female relationships, and the “cheapness of sex.”

But I would argue that there isn’t just one thing that you can point at and decisively say, “That one. That one was the man killer.” Instead, the source of the modern male’s lack of motivation is a conglomeration of all these factors. In short, the “problem”  is modern life in general.

To me the modern world is the best possible world to live in, without a doubt. The advancements we’ve made in technology and culture have made life safer, freer, and longer than ever before.

The Wild Man Navigates Life in the 21rst Century

“Our forefathers had civilization inside themselves, the wild outside. We live in the civilization they created, but within us the wilderness still lingers. What they dreamed, we live, and what they lived, we dream.” -T.K. Whipple

Over tens of thousands of years, our manly ancestors evolved unique psychological traits that helped them survive and thrive in a dangerous, hardscrabble world. While we like to think that we’re cultured and sophisticated and quite a distance beyond all that, all men still have these primitive psychological traits embedded deep inside them.  As we can see from a show like “Human Planet,” there are still men who live this way right now. The modern society we enjoy today represents a mere blink in the long history of humanity.

And so we have a mismatch, where for men in the developed world the inner elements of masculinity remain unchanged, while the outer landscape in which those elements exist has been dramatically altered. Instead of spending most of our time outside each day, we spend the majority of it inside. Instead of braving the elements, we spend our time in climate-controlled environments. Instead of making things with our hands, we select items from the hundreds that line the aisles of gigantic stores. Instead of hunting down our dinner, we buy our meat pre-cut, in Styrofoam containers. Instead of being looked to as leaders of the tribe, we see ourselves lampooned in the media as bumbling and inept.

The primal elements of masculinity sit within us like a well-trained regiment of soldiers that is ready and itching to fight, but sits waiting restlessly, and endlessly, in reserve. Core aspects of the male psyche lie dormant, and men find themselves as square pegs trying to fit into a round hole. Having butted up against this mismatch over and over again, men are feeling angry and restless, losing their motivation, and giving up.

Modern Man: Stuck Between a Rock and a Hard Place

There are many more pundits who like to describe the problem with men today than actually propose a solution. And when a solution is proffered, it typically takes the form of “Get over it men. Your sun has set. Move on. It’s a woman’s world now.” And what this typically translates to is this: become more like women. Get in touch with your feelings, become more nurturing, and train to join the thriving, and traditionally female-dominated careers like nursing. The square peg is told to smooth off his sharp corners.

The other solution that some men take is to put themselves back in an environment similar to our caveman ancestors, so those unique male attributes are actually useful again. Men like Chris McCandless and Eustace Conway returned to the wild to live a more primitive lifestyle in order to reclaim their manliness and find themselves.

And so here we arrive at the crux of the problem. The solution offered to men by some–become more like women and leave behind traditional manliness–is not attractive to most guys. And the idea of going to live in a cave or an abandoned bus to live off the land isn’t a viable or desirable option either for most.  And thus men find themselves at what seems like a rock and a hard place. Feeling like there is no way forward, they sit down and surrender, and simply content themselves with drifting along.

Now some say that the drifting male isn’t really a problem at all. That men are obsolete and there isn’t a role for them to play in the modern world anyway. To which I say, bullocks!

It’s great that women finally have the freedom and opportunities to be their best, but society needs to have both sexes striving to reach their fullest potential.

Men at their best will be needed in every time and in every place. Our unique attributes are no longer always called upon for hunting dinner and doing battle (although as the recent killing of Osama bin Laden testifies, we certainly still need men for that). But we still need men to become leaders of families, honorable statesmen, innovators and entrepreneurs, teachers and mentors, and worthy brothers, husbands, and citizens. Men at their best have something unique to offer the world no matter what the changing landscape. Men are absolutely vital to the continued health of society. To throw up our hands and say we’re obsolete is beyond silly. We just need to learn to re-purpose our unique manly traits for our new environment.

There’s still a role for men to play in the world. We simply need to find a way to get motivated and going again. To get back on the horse.

Flipping the Switches of Manliness

The solution for the modern male malaise lies at the heart of the idea behind the Art of Manliness itself: to move forward by looking back.

The solution means moving beyond the all-or-nothing proposition we sometimes feel we are stuck with. Men feel like they cannot fully embrace the old ways nor move into the new ways, and so they decide to do nothing at all. But it doesn’t have to be an all or nothing proposition. You don’t have to become a sensitive ponytail guy OR a Neanderthal.

Something that has helped me lately is picturing those unique primordial male characteristics as power switches that are either on or off. When these switches are turned on, they activate our Wild Man. Talked about in books like Iron John and Wild at Heart, and here on AoM, the Wild Man is the spirited, primal part of a man’s soul.

And the thing I’ve discovered is that you can activate your Wild Man by doing things far short of running down a herd of antelope for your dinner. You can take the parts of masculinity that have been an integral part of manliness for thousands of years and make sure some semblance of them are operating in your life. Not to the extent that they were manifested in the lives of primitive man, but active nonetheless.  Sometimes we don’t move forward in our life because we think the solution to our problem must be complicated and arduous to be effective. But the switches of manliness can be turned on in surprisingly small and simple ways.

What are the switches of manliness?

I know it’s debatable, and everyone is going to have their opinion as to what they are, but I personally believe that there are five switches that every man must turn on in order to power his spiritedness and flip on the motivation that allows him to reach his full potential:

Over the next several weeks, we’ll be exploring each of the these switches, both the sociology and biology behind them, but also the practical ways to flip the switches in your life so you can rein in your restlessness, activate your manliness, and cure the modern male malaise you might be feeling.