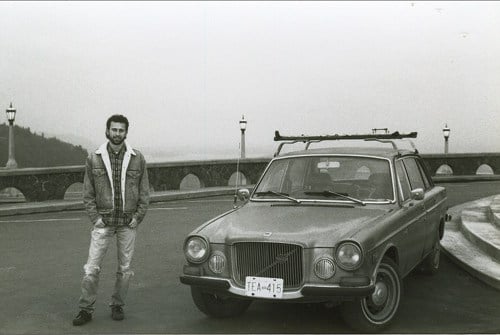 Every man dreams of driving a Lamborghini, Lotus, or Land Rover. Sometimes we think a new ride will make us more of a man. If the urge for a different set of wheels is a constant in your life, a change of perspective might be all that’s needed to see your car in a new light.

Last month, my wife and I traded in what we’d been driving. It was a sporty, red, 2009 Pontiac Vibe, basically a rebadged Toyota Matrix. We loved that car, and it fit our needs for several years. But the time for change had come. In its place, we bought a Toyota Sienna. Yep, you heard right—

The swap was prompted by the fast-approaching birth of our third child. Our blessed addition is due this spring, and three kids equals a need for a kid-hauling vehicle.

I moped around for a week, thanking my lucky stars for the practical new wheels, yet feeling strangely middle-aged and dandruffy. A minivan was something I swore I’d never drive.

I imagined my face morphed onto Clark Griswold’s in National Lampoon’s Vacation. He was driving a wood-paneled station wagon back in 1983. But when Christy Brinkley pulled next to him in her Ferrari, you could see the insinuation: the men who drive what you drive only go to Walley World.

Then I got to thinking. From a certain perspective, a minivan is respectable. In fact, not only respectable, but cool. At my age, I’m no longer fast nor furious. I run in business-oriented author-circles, and I’m not trying to be elite street-racer/ ex-convict Dominic Toretto. Frankly, I don’t have his abs.

So what’s respectable about the minivan? It correctly fits the stage of life I’m in right now. A confident man knows who he is, and isn’t trying to be anyone other than his authentic self.

That knowledge goes a long way toward a man feeling good about the vehicle he owns.

Consider the seven main vehicular stages of a man’s life:

A first car is a young man’s ticket to freedom. It might be an absolute jalopy, but at least he isn’t catching a ride to the fall dance anymore with his date in the backseat and his mother behind the wheel.

A first car is about more than dating freedom. It’s the Gentile equivalent of a bar mitzvah, a coming-of-age mark of arrival. If you drive your own car, you’re no longer a boy . . . you’re a young man. First cars crank up responsibility. You buy your own gasoline. You learn how to fix a flat tire. You find a part-time job to pay for the insurance.

Ask any man about the first car he owned, and you’ll always get a story. I bought my first car as a senior in high school. It was a 1972 Volvo 164E. I put surf racks on top, and when I headed off to college, I could get everything I owned either in it, or on it. It might have been a Volvo, but I rode with style.

This stage does not mean a man is irresponsible. It means he’s begun his first real job, has discretionary income, and has no one to support but himself. If he sinks a ton of cash or time into his vehicle, no one objects.

A man with limited responsibilities doesn’t need to haul anyone anywhere. Maybe a girlfriend on a date. Or a buddy on a road trip. But there are no infant car seats. Only the top down and the open road.

I drove two different cars during this stage—a two-seater Honda CRX and, later, a Jeep Wrangler. Both great cars.

Enter wife. Mortgage. Kids. Job changes. Debt reduction. All the adult responsibilities of a man’s life. In this stage of vehicle ownership, a man doesn’t necessarily drive what he wants. He drives what he needs.

That’s highly respectable, nothing to apologize for. He recognizes other things his money needs to go toward besides a car, so he voluntarily drives what works best for his family’s budget.

I drove several cars during this stage. A brown Honda Accord for awhile—dull, but highly practical. And a near vintage Mazda pickup truck—17 years old. It was dented and scraped and the heater didn’t work well in winter. But I bought it off a mechanic. That old truck drove without a hiccup for five years.

We’re in this stage right now with our Sienna. Sure, there’s a stigma attached to a minivan, but the kids love that thing. Already they’ve each claimed their seat in the back. They have room to stretch out on trips. And they’re eager for the baby’s arrival—anticipating who gets to sit next to the new addition.

If you’re driving a car out of familial necessity, drive it with pride, man. You’re doing the right thing.

But most men have everyday professions. I’ve got a buddy who commutes 50 minutes each way to work. He drives a Prius for one reason only—good gas mileage.

A time may come in a man’s life when he has enough disposable income to drive any car he wants. Within parameters of work or retirement, he can drive the car he’s always longed for.

A car in this stage doesn’t need to be flashy or even new. A friend owns a 1965 Mustang convertible. Sure, it sits in his garage most days. But the car represents pride of ownership. It’s a badge of honor for a job well done on some solid real estate investments he made.

Another man recently purchased an all-wheel-drive Honda Pilot. He wanted a vehicle that he and his wife could safely drive to see their grandchildren—six hours away over snowy roads in winter.

That’s a vehicle of arrival too. He loves the car because it accomplishes exactly what he wants it to do.

One of my grandfathers died at age 91. In the months before his death, he was so frail he could barely speak. But he still had a driver’s license. He hadn’t used it for two years. Yet he was proud that he could still—in theory—legally drive.

My other grandfather moved into a retirement home in his late 80s. He sold his last car to a grandson, then went out the next day and bought a mountain bike.

He didn’t ride his bike more than twice. But he kept it, he said, “in case I need to go somewhere in a hurry.”

The principle? A man likes to have wheels. Period.

No matter what kind of car you drive, you’re bound to have certain feelings about your vehicle. It’s helpful to know you’re driving the right car for whatever stage of life you’re in. The right car fits each stage of a man’s life. So drive on, men—

If you’ve enjoyed Marcus Brotherton’s occasional guest posts over the years, you’ll be pleased to know that he’s joining us as one of our regular writers and will be contributing an original article to the site each month. Marcus is the New York Times bestselling author or co-author of more than 25 books, including We Who Are Alive & Remain, with 20 of the last surviving Band of Brothers. He also blogs at Men Who Lead Well. I have long enjoyed the insights Marcus has gotten from his numerous interviews with WWII veterans, and his view on life, and we are privileged to have him as a regular contributor here. Please welcome Marcus aboard!