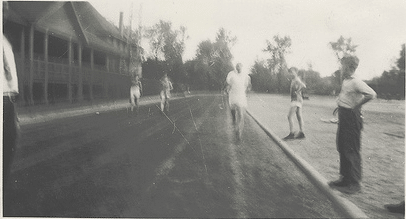 To Monday’s post on hustle, I’d like to add just one more thing: It’s not enough to just be busy all the time. You have to direct and focus your energy on a clear goal! This Manvotional sums this point up nicely.

“Activity Is Not Always Energy”

from Readings for Young Men, Merchants and Men of Business, 1866

There are some men, whose failure to succeed in life is a problem to others, as well as themselves. They are industrious, prudent, and economical; yet, after a long life of striving, old age finds them still poor. They complain of ill-luck. They say fate is always against them. But the fact is, they miscarry because they have mistaken mere activity for energy. Confounding two things essentially different, they have supposed that, if they were always busy, they would be certain to be advancing their fortunes.

They have forgotten that misdirected labour is but a waste of activity. The person who would succeed in life, is like a marksman firing at a target; if his shots miss the mark, they are a waste of powder: to be of any service at all, they must tell in the bull’s eye, or near. So, in the great game of life, what a man does must be made to count, or it had almost as well been left undone.

The idle warrior, cut from a shingle, who fights the air on the top of a weathercock, instead of being made to turn some machine commensurate with his strength, is not more worthless than the merely active man, who, though busy from sunrise to sunset, dissipates his labour on trifles, when he ought skilfully to concentrate it on some great end.

Everybody knows someone in his circle of acquaintance, who, though always active, has this want of energy. The distemper, if we may call it such, exhibits itself in various ways. In some cases, the man has merely an executive faculty when he should have a directive one: in other language, he makes a capital clerk for himself, when he ought to do the thinking of the business. In other cases, what is done is either not done at the right time, or in the right way. Sometimes there is no distinction made between objects of different magnitudes, but as much labour is bestowed in a trivial affair as on a matter of vast moment.

Energy, correctly understood, is activity proportioned to the end. Napoleon would often, when in a campaign, remain for days without taking off his clothes, now galloping from point to point, now dictating dispatches, now studying maps. But his periods of repose, when the crisis was over, were generally as protracted as his exertions had been. He has been known to sleep for eighteen hours on a stretch. Second-rate men, your slaves of tape and routine, while they would fall short of the superhuman exertions of the great Emperor, would have thought themselves lost, beyond hope, if they imitated what they call his indolence. They are capital illustrations of activity, keeping up their monotonous jog-trot forever; while Napoleon, with his gigantic industry, alternating with such apparent idleness, is as striking an example of energy.

We do not mean to imply that chronic indolence, if relieved occasionally by spasmodic fits of industry, is to be recommended. Men who have this character run into the opposite extreme of that which we have been stigmatizing, and fail as invariably of winning success in life…Real energy, is persevering, steady, disciplined. It never either loses sight of the object to be accomplished, nor intermits its exertions while there is a possibility of success. Napoleon, in the plains of Champagne, sometimes fighting two battles in one day, first defeating the Russians, and then turning on the Austrians, is an illustration of this energy. The Duke of Brunswick, dawdling away precious time when he invaded France at the outbreak of the first revolution, is an example to the contrary. Activity beats about a cover like an untrained dog, never lighting on the covey. Energy goes straight to the bird.