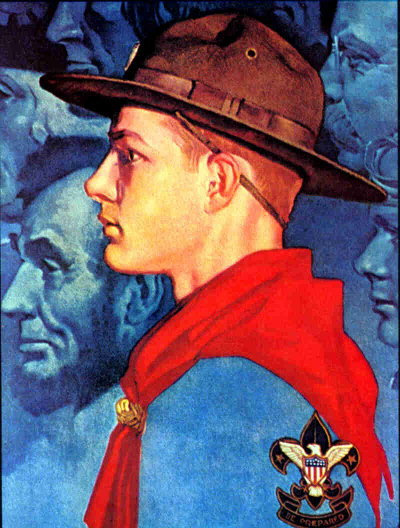 Editor’s Note: This is a guest post from Harry R. Burger. Mr. Burger joined the Cubs Scouts at six years old and has now been involved with Scouting for 20 years. He earned his Eagle in 2001.

Today marks the 100th anniversary of the founding of the Boy Scouts of America. For the past century, the Boy Scouts of America has been a premier organization for teaching boys to be good men. In addition to camping and outdoors skills, boys are taught leadership, character, citizenship, and service to others. They also have fun while they are doing it – after all, middle and high school kids have plenty of other things they could be doing with their time. In honor of their centennial, the BSA has launched a major effort to raise awareness of their history and prepare for the future, including re-connecting with Scout alumni. 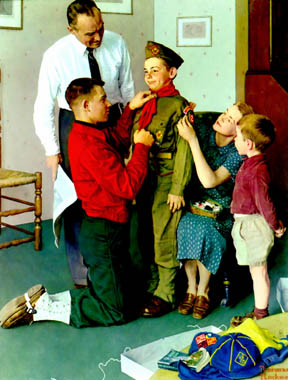 The Boy Scouts lay out a set of values that the boys are expected to uphold. In previous generations, boys would be taught how to be a man by their fathers, but these days more and more are growing up without positive male role models in their families. The Scouts provide one the few remaining bastions for the kind of male mentoring that is essential for a boy’s journey to manhood. Even for those boys who come from solid families already, the Scout Oath, Law, Motto, and Slogan provide a backbone of ethics that complements and enhances the guidance he gets at home and in his faith community.

Merit Badges are available for just about any profession, sport, or hobby, and many a Scout has learned new skills and talents through a Merit Badge that become a career or lifelong passion. For example, Pioneering had me building bridges and towers out of ropes and poles, and today I’m a mechanical engineer.

Eagle Scout is the highest award presented by the BSA, a worthy accomplishment only 5% of Scouts attain. The award represents many years of dedication and service as well as commitment to the values of Scouting. The capstone of earning this rank is the Eagle Project, which requires that the Scout “…plan, develop, and give leadership to others in a service project helpful to any religious institution, any school, or your community.” People can say that someone “was” a First Class Scout in their youth, but once a man earns Eagle, he always IS an Eagle Scout – “Once an Eagle, always an Eagle.” 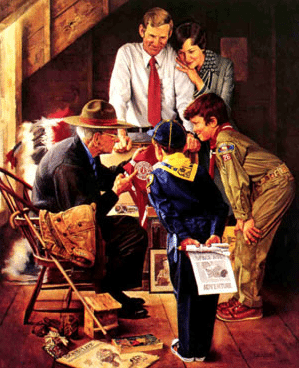 “Be Prepared… the meaning of the motto is that a scout must prepare himself by previous thinking out and practicing how to act on any accident or emergency so that he is never taken by surprise.”

Lord Robert Baden-Powell, a British war hero, originally started the Boy Scouts in Great Britain in 1907. The Scouting movement came “across the pond” because one of Powell’s boys helped guide a stranger who got lost in London’s fog. When the gentleman reached into his pocket to tip the boy, he refused payment and explained that it was his Good Turn as a Scout. William D. Boyce was so impressed with this young man that he sought out Baden-Powell and arranged to bring the ideas of Scouting home to America, where the BSA was formally founded February 8, 1910. The boy never gave his name, and today he is simply “The Unknown Scout.”

Most boys are first drawn towards Scouting by two things – fire and knives. These are the oldest tools of Man, and the leaders make sure that a Scout is only allowed to use these things after being trained and demonstrating that he knows how to use them safely.

Earning the first three ranks in the Boy Scouts (Tenderfoot, Second Class, and First Class) requires learning the skills of woodcraft – packing for an overnight trip in the wild, pitching a tent, land navigation, confronting the elements, first aid, cooking, using ropes, and personal fitness. The later ranks (Star, Life, and Eagle) involve planning expeditions and teaching those skills to the younger boys. 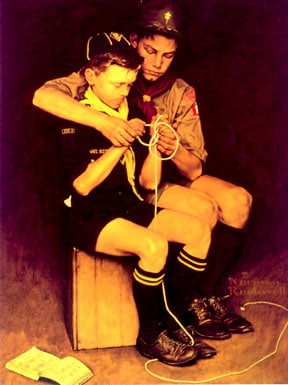 “The generation now being shaped by Scouting will be strengthened by deserved self-confidence and molded with its own history of kindness, bravery, honesty, and its all-out pursuit of excellence.” -Earl G. Graves, Publisher, Black Enterprise Magazine

One of the primary objectives in every troop is to have a “boy led” organization. The adult leaders are present to offer guidance and supervise to watch out for safety issues (and to chauffeur the Scouts hither and yon). It is the senior Scouts who choose what activities they want the group to do and figure out how to make it happen. The Senior Patrol Leader (SPL) presides over weekly meetings and is tasked with keeping a crowd of teenagers focused on a common purpose. Yes, that is as hard as it sounds, and the SPL is usually only 16 or 17 himself. Other Scouts are responsible for keeping track of the Troop’s equipment (Quartermaster) or training the newcomers (Troop Guide).

There are also many programs and courses offered to teach leadership skills, many of them taught by experienced Scouts. Courses covering similar material are available in the business world as seminars and such for thousands of dollars a head, while the Boy Scouts offers them for a fraction of the cost, as much of their staff is made up of volunteers. A troop gives Scouts a chance to lead in an environment that expects them to make mistakes from time to time, and rather than punish failures, those above take the time to show the boys how to improve. 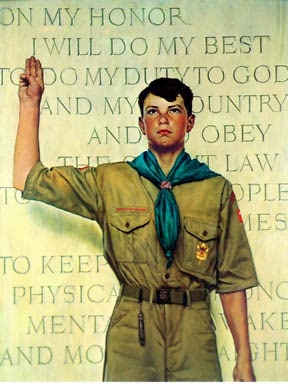 “Scouting reinforces values you brought from home. It gave us an opportunity to share them with others whose values were not as strong.” -Jose Nino, President and chief executive officer, El Nino Group, and former President, U.S. Hispanic Chamber of Commerce

On my honor, I will do my best

To do my duty to God and my country and to obey the Scout Law;

To help other people at all times;

To keep myself physically strong, mentally awake and morally straight.

The Scout Motto: Be Prepared.

The Scout Slogan: Do a Good Turn daily.

These are the principles that all Scouts are expected to uphold. A key point is the first line – “I will do my best.” No man is perfect, and boys even less so, but all try. Rather than telling boys a list of things NOT to do, which to them implies anything not on the list is OK, it tells them what TO do and gives them a high standard to live up to.

“I assure you of my own personal appreciation of Scouting as a magnificent experience and form of social and religious commitment.” -His Holiness Pope John Paul II

Many of the rank advancement requirements involve learning to be a good citizen. It starts with learning the proper treatment and respect for the American flag and discussing a citizen’s Constitutional Rights and obligations with an appropriate expert. Earning the Eagle award requires 21 Merit Badges, which must include Citizenship in the Community, the Nation, and the World. To earn these three awards, they need to understand how their government works, who their representatives are, and what they can do to affect change in government. One of the requirements is to pick an issue and actually write a letter to their Congressman. Of the current Senate and House of Representatives, 211 out of 535 are affiliated with the Boy Scouts in one way or another, and 22 of those are Eagle Scouts. The late President Gerald R. Ford was also an Eagle.

“…to help other people at all times…”

Scouts are aware that there are many in this world less fortunate than they, and public service is an integral part of Scouting. Scouting for Food collects millions of cans of food for the needy every year. The variety of other service projects undertaken is far too broad to truly do it justice here. Just to name a few: installing new safety nets for a fish hatchery, building a handicapped access ramp for the Red Cross, restoring a historic cemetery, repairing damaged trails, and refinishing and installing church pews. Since Barack Obama’s inauguration and national call to service, the BSA has been running a program called Good Turn for America that has resulted in over 8 million recorded hours of community service in its first year.

Many choose to continue service for their adult professions. In addition to elected office, many work for the government in other capacities or for nonprofit organizations. The military is also a common choice – Eagle Scouts who enlist start out at pay grade E3 instead of E1, and of the class of 2013 for West Point, 40% were Scouts and 16% are Eagles or Gold Scouts (the Girl Scout equivalent). 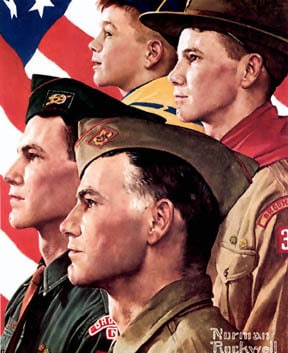 “In the 30 years that I’ve been doing this for a living, I’ve never had a parent say to me, ‘I regretted the time I spent with my son or child in Scouting.'” -Roy L. Williams, Chief Scout Executive, Boy Scouts of America

In honor of their 100th anniversary, Councils and Troops have been encouraged to reach out to past members and recognize the history and achievements of past members – seek out your local council for more specifics. They are also making plans for the future to respond to changes in our civilization and in technology. For example, Webmaster has now been added as an official position of responsibility within Troops, and a new requirement for the lower ranks addresses cyberbullying.