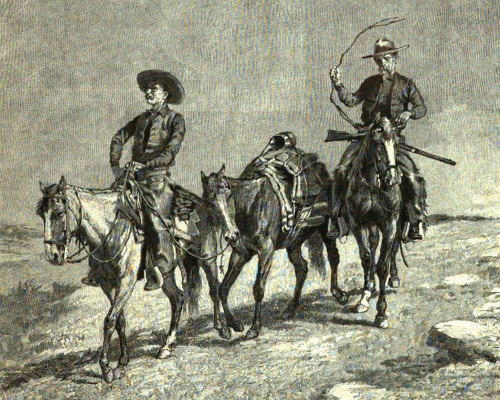 From the speech, Citizenship in a Republic, 1910
By Theodore Roosevelt

Let me illustrate this by one anecdote from my own experience. A number of years ago I was engaged in cattle-ranching on the great plains of the western United States. There were no fences. The cattle wandered free, the ownership of each being determined by the brand; the calves were branded with the brand of the cows they followed. If on the round-up an animal was passed by, the following year it would appear as an unbranded yearling, and was then called a maverick. By the custom of the country these mavericks were branded with the brand of the man on whose range they were found. One day I was riding the range with a newly hired cowboy, and we came upon a maverick. We roped and threw it; then we built a little fire, took out a cinch-ring, heated it at the fire; and the cowboy started to put on the brand. I said to him, “It is So-and-so’s brand,” naming the man on whose range we happened to be. He answered: “That’s all right, boss; I know my business.” In another moment I said to him: “Hold on, you are putting on my brand!” To which he answered: “That’s all right; I always put on the boss’s brand.” I answered: “Oh, very well. Now you go straight back to the ranch and get what is owing to you; I don’t need you any longer.” He jumped up and said: “Why, what’s the matter? I was putting on your brand.” And I answered: “Yes, my friend, and if you will steal for me you will steal from me.”